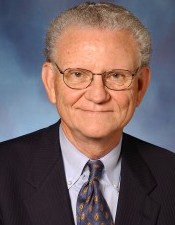 Money to step down as ACU president

Staff Reports
Royce Money, who has served as president of Abilene Christian University for the last 18 years, has announced that he will step down at the end of the 2009-2010 academic year.
In a memo sent via e-mail on May 19 to faculty and staff members informing them of his decision, he provided a timeline for his departure, the hiring of a successor and his transition to the role of chancellor.
“Pam and I have been thinking about this for quite some time, but now seems like the best time as far as how the university is positioned,” Money, 66, told the Chronicle. “It’s the right thing to do and the right time to do it.”
He said the board will hire a firm to assist with the national search for a new president and expects his successor to be named by next spring.
Input on candidates will also come from a presidential search committee comprised of board members, faculty, staff, students, alumni and administration, Money said.
Money came to ACU as a college freshman in 1960, earning a Bachelor of Arts degree in 1964 and a Master of Divinity degree in 1967. He joined the university’s faculty in 1981, serving in the Bible department, before moving on to various roles in administration. He was appointed president in 1991.
“It struck me that when this year’s freshman class enrolled, I was appointed president the year they were born,” he said. “That was quite a realization.”
He praised those associated with ACU for his longevity in the university’s top role, crediting their passion for Christian higher education with his tenure.
“Quite simply, I am surrounded by great people,” he said. “In that sense, I feel more like a choral director than anything.”