After the murders of his wife and son, Mississippi minister Les Ferguson Jr. wrestled with God.

Why — the longtime minister demanded to know — didn’t the Almighty protect his wife and son from the predator who murdered them?

In his darkest days, Ferguson couldn’t imagine ever trusting in the Lord again, much less proclaiming the Gospel before a crowd of saints and sinners in a tree-shaded church building. 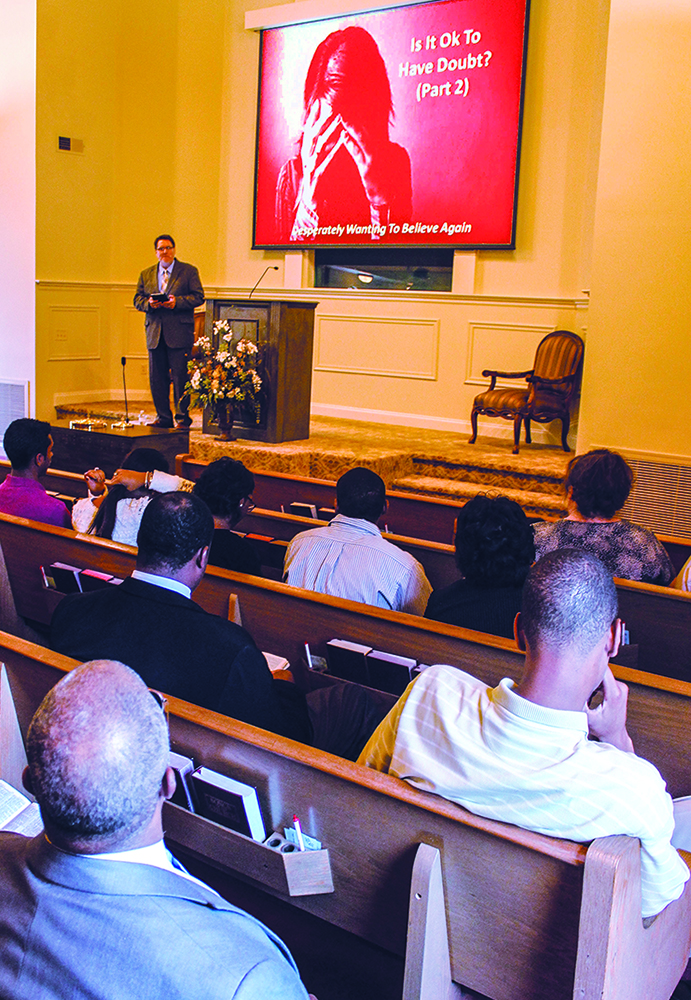 “True confession time: There were mighty dark days,” Ferguson told the 211 souls who filled the pews. “There were nights of questioning and wondering. There were days and nights, hour upon hour of screaming at God until I completely lost my voice and couldn’t say another word.”

But with the Lake Harbour Drive church, the modern-day Job has found his voice again and revived his calling.

“Les sat in Job’s ashes for a while, accompanied by the kinds of doubts, questions and pain you might expect,” said close friend Danny Dodd, who preaches for the Levy Church of Christ in North Little Rock, Ark.

“Like Job, though, underneath it all was faith,” added Dodd, who has known Ferguson since they were Magnolia Bible College roommates in the early 1980s. “That allowed God to continually work to bring about a personal resurrection of his joy, his family and his preaching and ministry gifts.”


‘THEY WERE JUST BEAUTIFUL PEOPLE’

But that day, unimaginable tragedy shattered the family’s world: Karen, 44, and son Cole, 21, were shot to death in the family’s home.

“They were just beautiful people,” said Les Ferguson, then the minister for the Orange Grove Church of Christ in Gulfport, Miss. “My son struggled his whole life with disabilities. He was frustrated and hurt a lot, but he was a good boy. He wanted to do right, and he loved God. He loved to sing, even if nobody else understood what he was saying.”

Karen Ferguson, meanwhile, “sacrificed her whole life for everybody around her.” 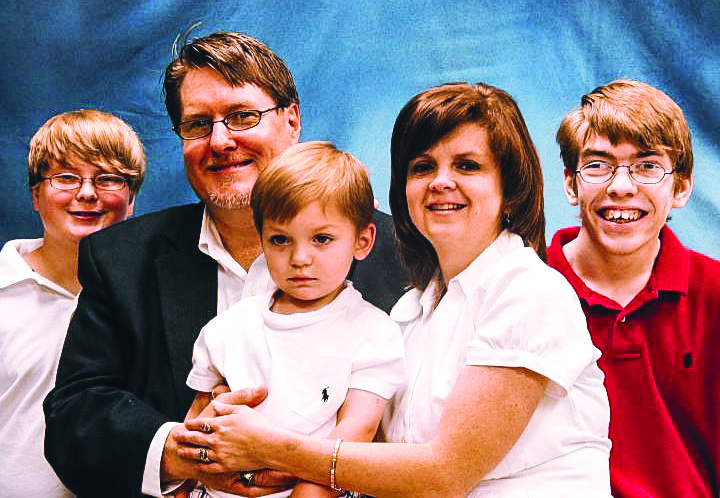 Les and Karen Ferguson, with Conner, Casey and Cole. Not pictured is the couple’s oldest son, Kyle. (PHOTO PROVIDED BY LES FERGUSON JR.)

The youngest of the Fergusons’ four sons — Casey, then 5 — ran to a neighbor’s house and survived the attack.

“We have no doubt whatever that she could have gotten away,” Les Ferguson said of his late wife. “But she got the youngest out of the house, and she stayed with Cole.”

Son Conner, then 14, had gone to play miniature golf with church friends. Adult son Kyle lived in Kentucky, where he served as a campus minister.

The killer — Paul Ellis Buckman — died of a self-inflicted gunshot wound at his apartment a few miles away, police said. 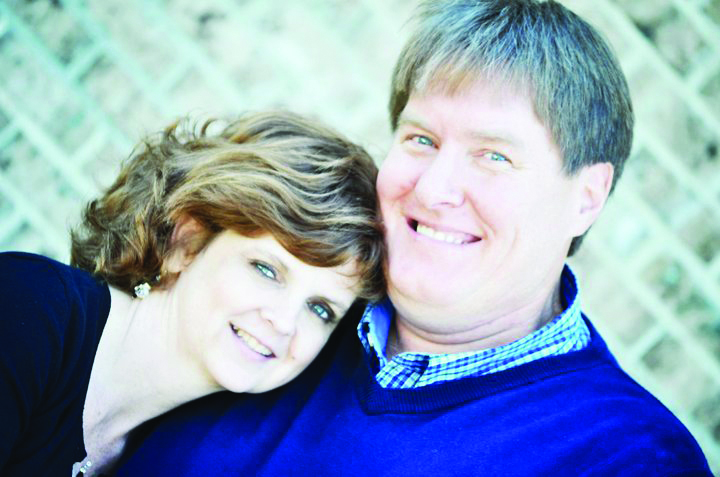 Karen and Les Ferguson were married for 24 years. (PHOTO PROVIDED BY FAMILY) Buckman, 70, had attended the Orange Grove church until he was charged three months earlier with sexually assaulting Cole Ferguson, who had cerebral palsy.

“God didn’t do this,” Les Ferguson said then. “This was just evil.”  But as weeks and months passed, the minister’s pain turned to despair.

He stayed up late, scrubbing bloodstains off his walls. He avoided returning to church, much less the pulpit. He pushed everyone out of his life, except for his immediate family and a few close friends.

“I was OK faith-wise for a month or two,” Ferguson said. “But the pain was so great, and the heartache was so heavy, I just kind of crashed.

When Ferguson adjusted the love seat in his living room and found bullet holes in the floor, he knew he had to leave Gulfport, the coastal community where he had ministered for 13 years.

Still wrestling with God, Ferguson relocated to Vicksburg, Miss. — about 200 miles northwest of his former home — and became a real estate agent.

As he worked to heal, he launched an online journal called “Desperately Wanting to Believe Again.”

“I never quit believing, and the name probably should have been ‘Desperately Wanting to Trust Again’ because it was more about my journey of learning to trust God again,” Ferguson said. “I used the blog to rant and rave and whine and fuss and praise as it came.” 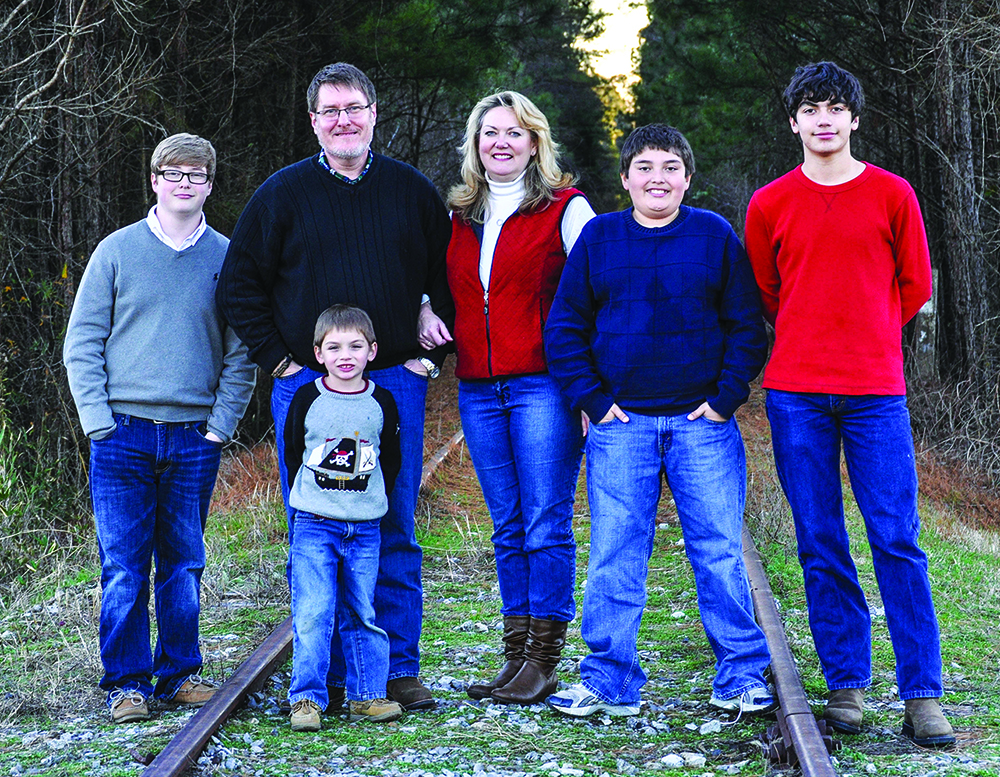 Les Ferguson and his new wife, Becki, pose for a photo with their blended family. Pictured, from left, are Conner, Les, Becki, Max and Michael, with Casey in front. Les and Becki first dated years ago before Les left home to serve in the Navy. (PHOTO PROVIDED BY FAMILY)

Meanwhile, Ferguson reconnected with a former sweetheart, Becki Berryman, whom he dated seriously before leaving to join the Navy as a young man.

Berryman, a mother of two teenage boys, had remained a close friend of Ferguson’s sister.

“To tell you the truth, I didn’t see it coming,” Berryman — now Becki Ferguson — said of the couple’s second chance at romance and their eventual marriage. “I never in a million years would have thought I would be right where I am.” 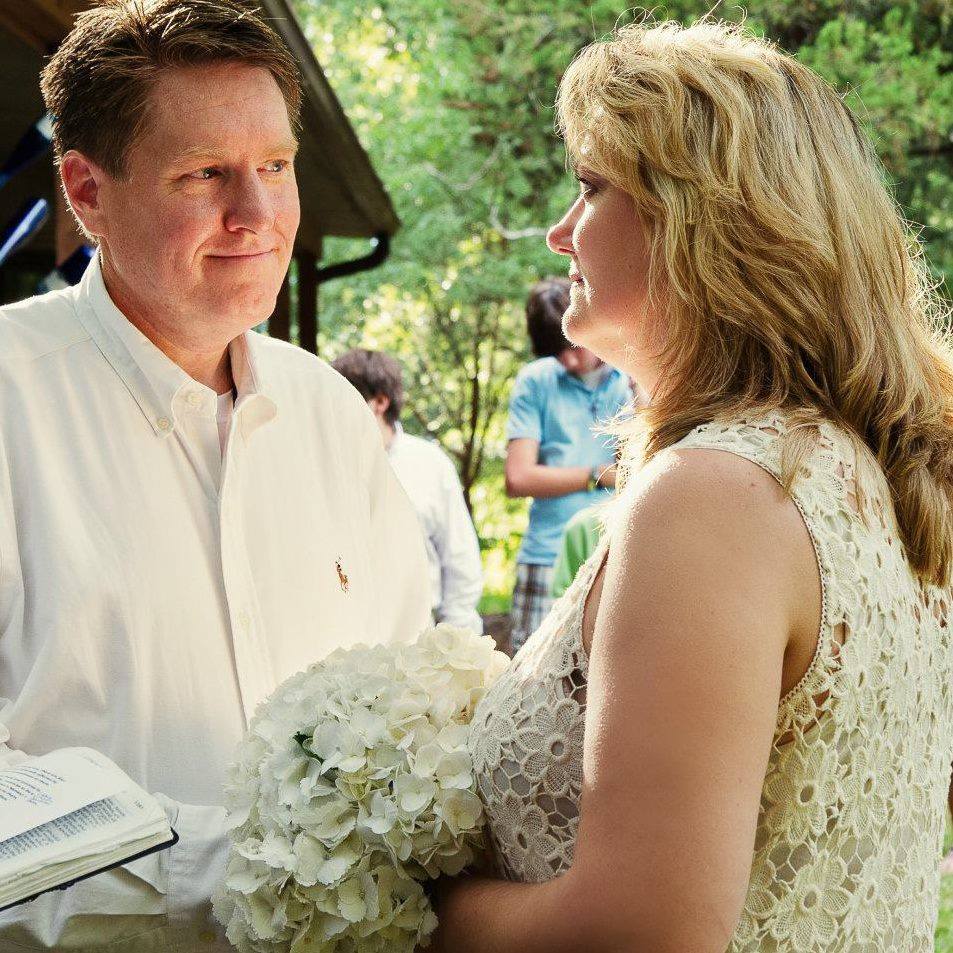 Les and Becki Ferguson on their wedding day. (FAMILY PHOTO)Les Ferguson said his new wife — along with his father, Les Ferguson Sr., a former president of the now-defunct Magnolia Bible College in Kosciusko, Miss., and his brother, Billy Ferguson, minister for the Seventh Street Church of Christ in Columbus, Miss. — dragged him out of the depths of despair and saved his life.

Becki Ferguson has “worked tirelessly to blend the family and help create a home of peace and joy and love,” the minister said.

“My children benefit from that every night,” he added. “Their original family was destroyed, but they’ve been blessed immeasurably, as I have, with a second chance. … In that fulfillment, the memory of their mother and their brother — the memory of our lost family — is honored.”

‘I LOVE YOU,’ HE TELLS HURTING PEOPLE

But as the Lake Harbour Drive church — a Deep South congregation with a mix of black and white members — sought a minister, Ferguson opened to the possibility. 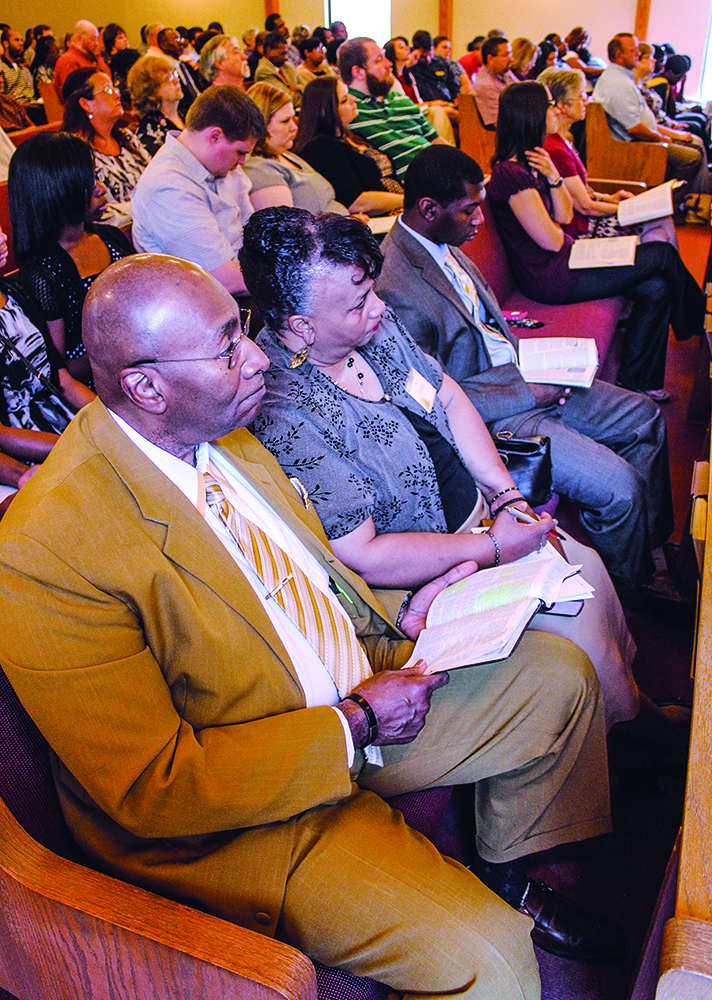 Willie and Doris Abram worship with the Lake Harbour Drive Church of Christ. The congregation has embraced minister Les Ferguson Jr. (PHOTO BY BOBBY ROSS JR.) “I didn’t think anyone would ever want me again,” he said. “I just felt like I was too much damaged goods.”

Rather than damaged goods, Lake Harbour Drive’s six elders viewed Ferguson as someone who could relate to hurting people in the pews — and beyond.

“We felt like Lake Harbour could be a big help to him, too, personally and in his faith,” elder Greg Palmer said of Ferguson’s hiring this past spring.

The elders invited Ferguson to use his circumstances to help others.

“It’s not one of those things where he tells you the terrible story every Sunday,” elder Morris Houston said. “But in his sermons, you get pieces of what he has recovered from … and I think it has a big impact.” 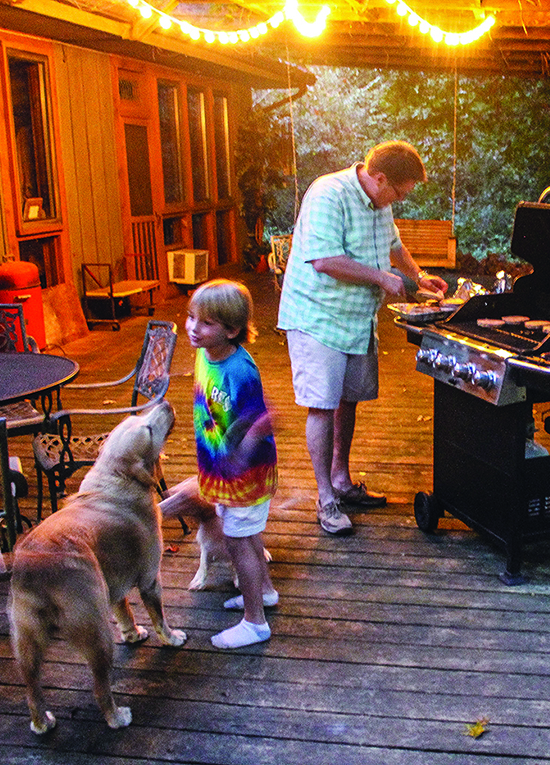 Les Ferguson Jr. grills burgers on his back deck while his son Casey, 8, plays with Dixie, one of the family’s dogs. (PHOTO BY BOBBY ROSS JR.)Dobbs suffered a tragedy of his own in 2008 when his 18-year-old son, John Robert Dobbs, was struck and killed on an interstate. Ferguson spoke at John Robert’s funeral.

“In his tenderest moments, Les remains crushed by his losses,” Dobbs said. “Grief runs like a river beneath his daily life. But in his tough moments, Les has learned to speak truthfully and forcefully for the abused and threatened.

“With God’s help, Les has taken the weapons Satan meant to destroy him and turned them into tools in the hands of the Savior,” his friend added. “There’s a beauty to this beastly story that will only be realized in the resurrection morning.”

Before tragedy struck, Ferguson had a gift bag full of clichéd answers for every circumstance, he recalled.

Now, he’s content to hug hurting people and tell them, “I love you.”

“Job’s friends did a really good job right up until the minute they opened their mouths,” Ferguson said, enjoying the ability to laugh again after enduring so much heartache. 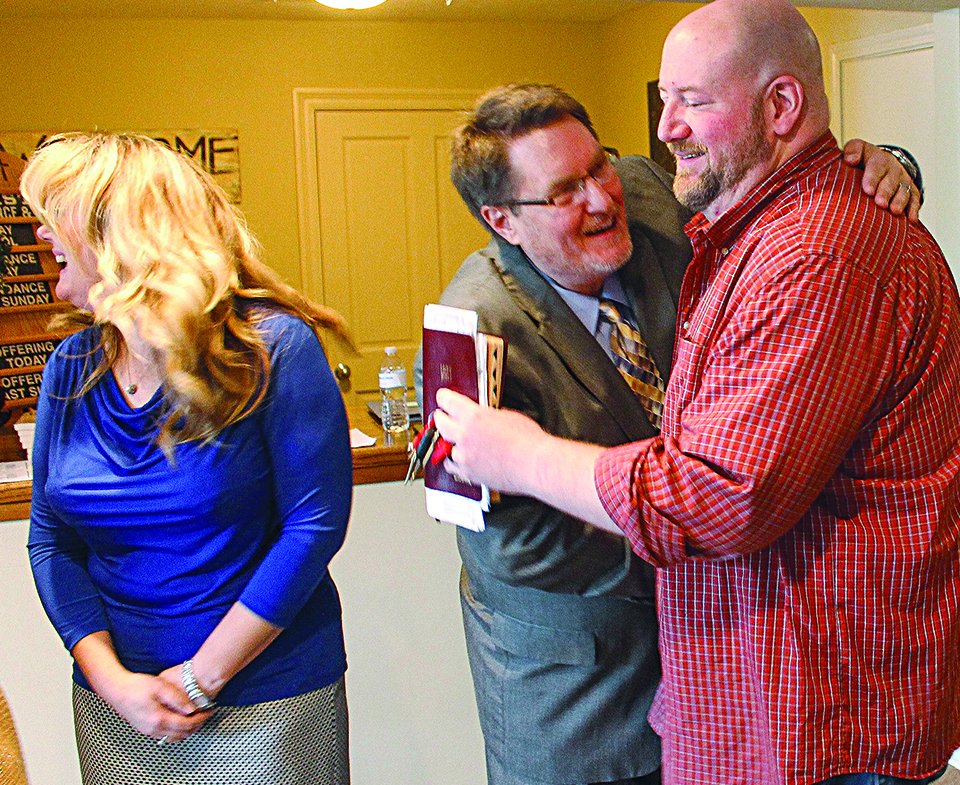 Les Ferguson Jr. greets Nick LeBlanc after a Sunday morning service at the Lake Harbour Drive Church of Christ, as Becki Ferguson enjoys a laugh while visiting with another member of the Ridgeland, Miss., congregation. (PHOTO BY BOBBY ROSS JR.) 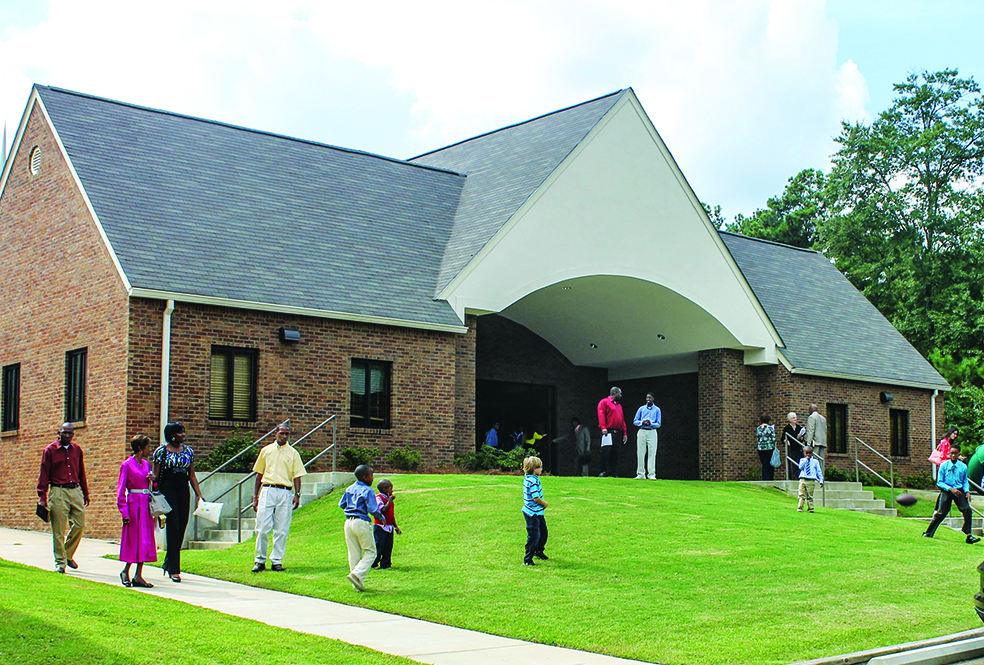 INSIDE STORY: Five years after Katrina, stories of hope emerge

I first met John Dobbs and Les Ferguson Jr. as…