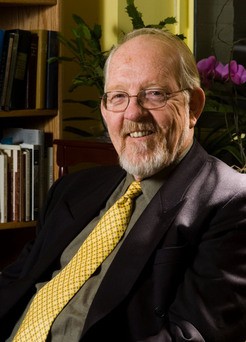 MIT chaplain on the Boston tragedy: Making sense of nonsense

Robert Randolph, longtime minister for the Brookline Church of Christ in the heart of Boston and chaplain for the Massachusetts Institute of Technology, wrote a guest piece for the Huffington Post during that city’s lockdown Friday.
Among his insights:

Christianity came into being on the occasion of great pain and suffering. A family lost an eldest son. A mother watched and wept. That is where we are now. Watching, waiting and weeping. I hear the sirens again. We are still locked down and it shows no sign of abating.
Steven Colbert helped us through the early days of the week, but now the anger comes unbidden. I got a call from the leader of the Muslim community worried about the hatred he feared might surface. It has not yet but it may. If it does then we are no better than those who have harmed us.
Today we know the fear Israeli students on their way to school know; what parents in Iraq know when they send their children out for groceries; the fear men in Afghanistan know when they leave home to get petrol. Around the world there are families who never know the kind of peace we take for granted. Now we have learned another name for fear, Chechnya. We see the world through new eyes.

Read the full piece.
See The Christian Chronicle’s earlier post on Randolph’s experience at the Boston Marathon on Monday.