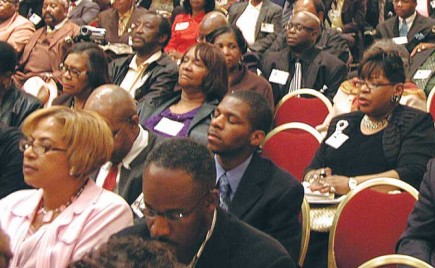 Joy McMillon
JACKSON, Miss. — Troubles will soon be o’er, happy forever more. When we meet on that shore, free from all care.
The voices of more than 800 worshipers filled the large conference room of the Jackson Marriott. Chris Turner from Durham, N.C., led worshipers in a heartfelt chorus of the old, familiar hymn as the 65th National Lectureship of the Churches of Christ began.
An estimated 1,000 ministers, church leaders and members of predominantly black congregations attended the recent four-day event, sponsored by the New Capitol Street church in Jackson.
The Southern capital was a focal point of the Civil Rights Movement. Activist Medgar Evers was murdered in Jackson by a white supremacist in 1963.
Three years later, the city was the terminus of the James Meredith March, organized by the first black student to enroll at the University of Mississippi.
According to W.F. Washington, however, the city has no particular meaning for lectureship participants.
“Every city was — and is — a struggle,” said Washington, minister for the 1,250-member Golden Heights church in Fort Lauderdale, Fla.
The South — and most Churches of Christ — were segregated when a group of black ministers launched the first National Lectureship in 1945 at the East 7th Street congregation in Oklahoma City.
Organizers R.N. Hogan, Levi Kennedy, G.E. Steward and J.S. Winston hoped the event would give young church leaders opportunities to learn from each other.
“Originally, many of the ministers in African-American churches weren’t educated academically,” said Roosevelt Wells, a minister for the Harlem church in New York and chairman of the lectureship’s national advisory board.
“They were very interested in learning, and that has motivated them to continue to come.”
More than half a century later, the lectureship has remained popular by maintaining its original purpose — training ministers in sermon preparation and presentation, Wells said.
“The overall motif of the lectureship then and now is to try to get African-American preachers … to speak the same thing and be as close to what the Bible teaches as possible,” Washington said.
The program also gives church members from across the nation ample opportunities to fellowship and share their faith, participants told The Christian Chronicle.
Iva Voldare, a church member from Carson, Calif., has attended the lectureship for 25 years.
“I love it!” said Voldare, a member of the Normandie church in Los Angeles. “You hear the most wonderful lessons, and it lifts you up.”
The lectureship theme was “That I may Know Him and the Power of His Resurrection.” Attendees participated in daily classes and workshops on technology, leadership and evangelism. Nightly worship assemblies featured speakers including Dewayne Winrow of Reseda, Calif., and Orpheus Heyward of Atlanta.
The lectureship also included a ladies’ luncheon and a two-day “pre-lectureship” featuring a national song leaders’ workshop and an a cappella gospel music concert with 13 singing groups.
Since the location of the national lectureships moves around the nation each year, many participants find time to visit the local sites.
“It’s almost like a homecoming, a reunion,” Washington said. “It gives people an outlet, an opportunity to be kind of on vacation while being edified and associating with fellow Christians.”
Most expenses for the full-time ministers and their wives are covered by their home congregations.
Churches in Philadelphia will host the 66th National Lectureship, scheduled for March 30 to April 4, 2010.