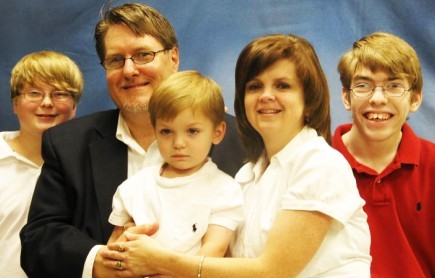 Les and Karen Ferguson, with Conner, Casey and Cole. Not pictured is the Ferguson’s oldest son, Kyle.

GULFPORT — There are no words that can help Minister Les Ferguson and his family deal with the recent deaths of his wife, Karen, and son Cole. Ferguson and his sons Casey, Conner and Kyle are in mourning but are supported with love by the members of Orange Grove Church of Christ, where Ferguson is the minister.
“I want to thank everyone,” Ferguson said. “My church family was just here and took over my needs that could be met. I am leaning on them and God. I have not been alone and have not had to do things on my own. I am very grateful to everyone. The church has allowed me to take as much time as I need before returning to the pulpit.”
Elder Bob Boyd arrived on the scene in the Kenwood subdivision on Oct. 10 shortly after he heard the news that there was trouble at the Ferguson home.
“One of the most powerful statements was the presence that the church family and friends made immediately following the tragedy,” Boyd said. “Over half of the congregation was in the neighborhood. Vehicles lined both sides of the street and they were all there to support the family.”