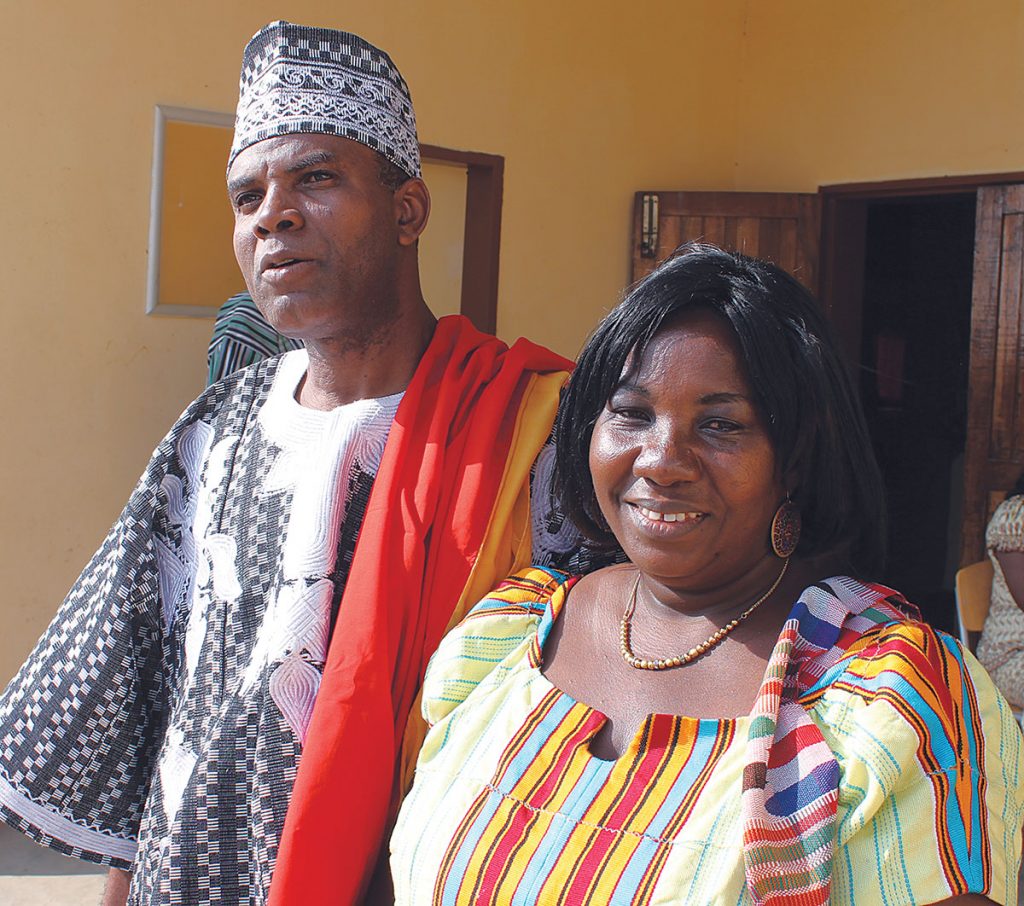 Erik Tryggestad
President and CEO
TCHAADA, Benin — “Our God is stronger than the god of Americans.”
George Akpabli utters the words as a prayer while seated alongside his African and U.S. brethren in a one-room school.
He asks the Almighty to help them all rely on the divine rather than dollars.
Akpabli, director of the Benin Bible Training Center, which prepares preachers for French-speaking Africa, has traveled to this extension campus of the school, near the Nigerian border, with Ed Jones, an elder of the Benton Church of Christ in Kentucky. Jones represents French African Christian Education, a nonprofit which helps finance the school.
For 10 years, a graduate of the school has preached here in the local language, Gun (pronounced “goon”). Another Gun-speaking graduate, Christian Todego, launched the extension program to train more ministers for the region’s ever-growing Agun Christi Ton, or Churches of Christ.
One by one, the preachers tell Jones about the congregations they serve and present their financial needs, written on worn sheets of paper torn from spiral notebooks. Public transportation is unreliable, says a minister who preaches for two churches. He could really use a motorbike. Another shepherds a congregation that meets in a member’s home. They need their own building.

After listening patiently, Akpabli offers the prayer. He asks the translators to tell the preachers — in French and Gun — that “God can use Africans or Americans or anybody else to help you, because it is his work that you are doing.” 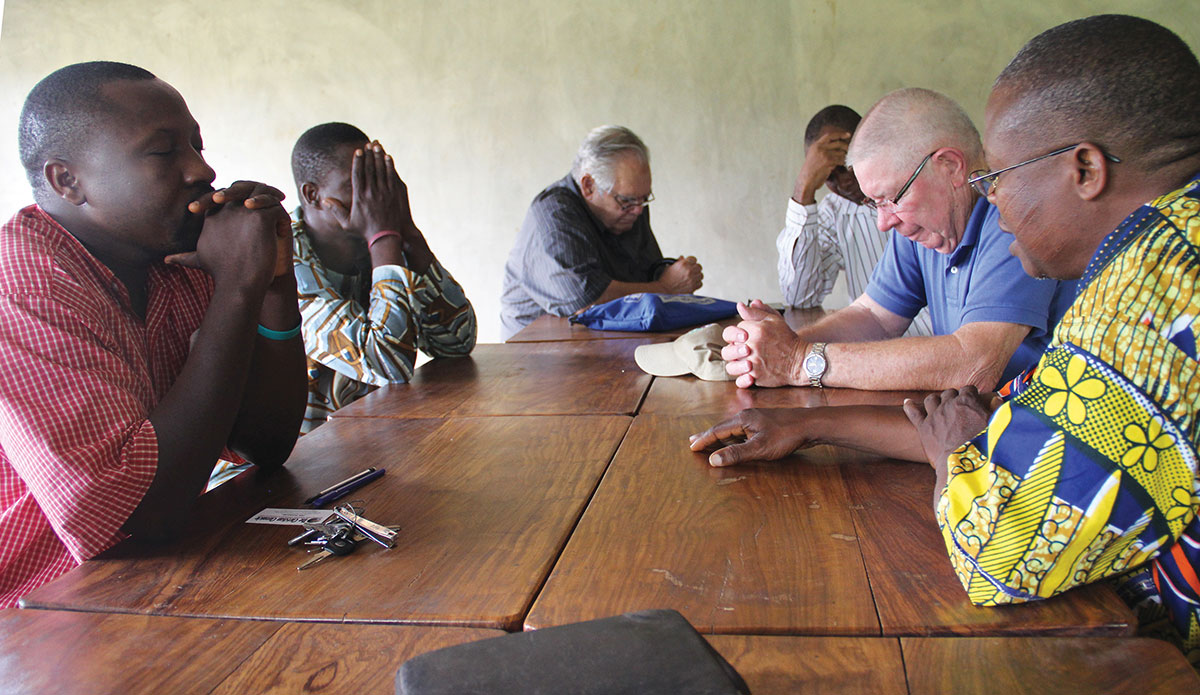 In the village of Tchaada, Benin, Christians from West Africa and the U.S. pray in three languages — English, French and a local dialect, Gun. (PHOTO BY ERIK TRYGGESTAD)


A MISSION DENIED, A MISSION BORN
A native of the Volta Region in eastern Ghana, Akpabli has been a passionate believer in African evangelism since his baptism on Nov. 16, 1975.
It’s a passion he shares with the 1,400 members of his home congregation, the Nsawam Road Church of Christ in Ghana’s capital, Accra. The church partners with Christians in the U.S. — and uses its own funds — to plant Churches of Christ in nations across West Africa.
In 1982, a Ghanaian evangelist, Daniel Ampadu Asiamah, secured $1,300 from a U.S. church for mission work in Togo — just east of Volta Region — and asked Akpabli to join the team. Akpabli didn’t speak French but knew a local language similar to one used in Togo.
Unable to obtain government registration, the church he helped plant in Togo met illegally. New converts couldn’t sing during worship. Eventually, the mission lost its funding, “just when I had begun to enjoy it,” Akpabli recalls with a chuckle.
He contacted the U.S. church, which found money for him to return to Togo. He became fluent in French. Soon, the churches he assisted there gained legal status. Their members could sing.
In the early 1990s, the Benton Church of Christ recruited Akpabli to reach souls in another French-speaking nation — Mauritius, a chain of islands north of Madagascar. To nurture the churches he was leaving, Akpabli arranged for two Togolese Christians to attend a ministry training school in Nigeria.
Both failed the entrance exam — not because they lacked Bible knowledge, but because their English was poor.
Frustrated, Akpabli and his family boarded a plane for Mauritius. After traveling thousands of miles from home, their religious worker visas were denied, due in part to political tensions between the islands’ Hindus and Christians, Akpabli says. They had 36 hours to leave.
Rather than look for another missionary for Mauritius, the Benton church’s leaders asked Akpabli what he wanted to do.
“We need to create a school where people don’t need to learn English first before they can study the Bible,” he told them.
He had turned over the work in Togo to another evangelist, but the country to its east, Benin, had no full-time workers.
“They said, ‘Well, go,’” he remembers. “It was just a step of faith. They didn’t know me.”

EMPOWERING AFRICA
Twenty years later, Benin, home to only a handful of believers when Akpabli arrived, has more than 60 Churches of Christ with a combined membership of more than 3,200.
The Bible Training Center, located north of Cotonou, Benin, has produced more than 130 ministers for the nations of French-speaking Africa. The school partners with U.S. Christians, including members of the Pearland Church of Christ in Texas who provide funds for its agricultural program. The school has two extension campuses — the one in Tchaada and another in Parakou.
The ministers Akpabli mentors understand the need for African-led evangelism, says Jones, who makes regular trips to Benin.
When they ask for funds, it’s rarely to fill their stomachs, he says. They want transportation to help them preach, meager buildings where churches can worship, medical supplies to share with those in need.
“They seem to understand and accept our goal to empower Africans to evangelize Africans and continue after Americans are gone,” Jones says.
As he prepares preachers for the French-speaking world, Akpabli uses the Holy Spirit’s charge from Acts 13:47 as a guide: “I have made you a light for the Gentiles, that you may bring salvation to the ends of the earth.”

“I made these words my own,” he says, “and believe that we should be a lighthouse, shining, carrying the good news of salvation to the ends of the earth.”