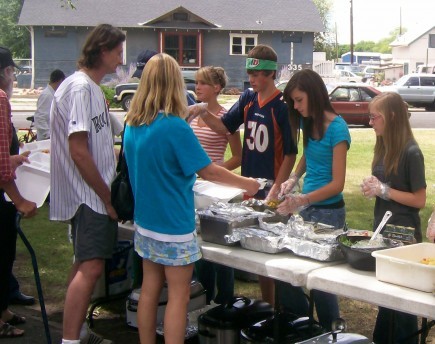 Staff Reports
Thirteen youth and sponsors from the University church in Denver planned and talked for months for their annual summer mission trip.
Yet when the nine teen-agers and four adults piled into their van one steamy morning, they had no itinerary. No hotel reservations or planned rest stops. Not even a clue which direction they’d drive once they left the church parking lot.
“Why do we need a ‘destination’ in mind when we go on a mission trip?” University youth minister Josh Jones asked the teens when discussions about possible locations began. “Who knows what opportunities we have missed while driving to where we were headed?”
Fresh from finishing a study on the Holy Spirit, participants decided to let God lead them — in every possible way — for one week. Their careful preparations, except for budgeting and loading some tools and camping supplies into a trailer, focused on having spiritual mindsets and fasting for the first 24 hours of the journey.
A pebble tossed onto a map guided them first toward northwest Colorado. Along the way, they prayed with
and helped a couple in a broken-down moving van.
The group later stopped in Grand Junction, Colo., and drove around town with “open eyes” to find opportunities to serve, Jones said. They spent the next few days cleaning a trash-filled lot, washing a bus, preparing meals for the homeless, painting and talking and praying with residents.
From there, they spun a wheel to determine which direction they’d drive. After two more stops along the highway to help stranded motorists, they arrived in Montrose, Colo. and prayed with members of the local police department who were mourning the shooting death of an officer.
Subsequent stops took them to the towns of Moab, Green River and Vermal in Utah, as well as Fruita and Craig, Colo.
“We laughed at God’s sense of humor as he led us,” Jones said, adding that once the group drove for hours in a big circle as they gave a ride to a man in need of prescription medication.
Other times, what seemed like small tasks — like mowing or pulling weeds — evolved into more elaborate home repair projects.
“It taught us to keep our eyes open for all of the opportunities that God provides, not just (the ones) we plan,” said Nicole Guillo, 20, University’s youth ministry intern.
The participants also marveled at how they were cared for: Half their meals were provided by churches or individuals they were serving, and they always had a building or campground with showers to stay in overnight.
“This trip revolutionized the concept of service for me,” said Mitch Bennett, 16. “I was shown that God calls us to serve every day in all ways, wherever we are.”
The week wasn’t without frustrations, Jones said. At times, contacts came more slowly than the eager workers would have liked, and a few projects required a handful of the teens instead of the entire group.
But the youth minister said the lessons learned were well worth the brief uncertainty at times.
“It wasn’t just the teens that didn’t know where we were going. I had no idea from … day to day or even hour to hour where we would be,” Jones said. “I think all of us got a real sense of what it means that God is our provider, what it means to have your eyes open to others’ needs and how to follow the Spirit’s guiding in our lives.”