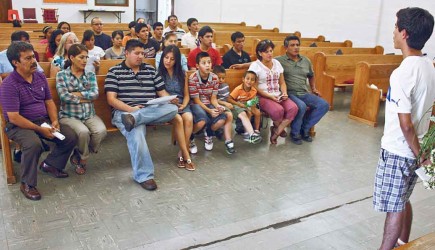 Erik Tryggestad
CHRISTIANS TRAVEL north of the border to spread the Gospel among Spanish speakers in Texas.
WICHITA FALLS, Texas — Before embarking on the 600-mile drive to this city on the Texas-Oklahoma line, a group of Mexican Christians raised prayers to heaven, asking for God’s protection.
U.S. immigration officers raised eyebrows in the same direction when the Christians told them why they were traveling to Texas — to take the good news of Jesus to Spanish speakers.
Usually, it’s the other way around.
Though their passports and notarized invitations were in order, the Christians were detained at the border for three hours — alongside five busloads of their countrymen headed for Las Vegas — before the border guards allowed them to enter the U.S.
Finally, 15 hours after they left their homes in Frontera, Mexico, the group of 18 Christians arrived in Wichita Falls.
Why endure the journey?

“Because you won’t come to see us anymore,” quipped Carlos Zavala, one of three elders of the Muzquiz Church of Christ in Frontera. In recent years, drug-related violence on the U.S.-Mexico border has curtailed mission trips.
“So, here we are,” Zavala said.


Zavala and his family got warm greetings from the Texans — especially 82-year-old Ken Sandefur, who stayed with the family in Mexico during a mission trip about seven years ago.
Sandefur has traveled the globe with World English Institute, a ministry that helps people improve their English skills using the Bible. He spent a month in Frontera, teaching English and worshiping with the 100-member church. He was impressed by their dedication — young and old — to spreading the Gospel.
Several Texas church members said they never imagined a day when Mexican Christians would serve as missionaries to the U.S. Sandefur wasn’t one of them.
“I wasn’t surprised, really, that they would come,” he said. “If anyone would do something like that, they would.”
CROSS-CULTURAL DOOR KNOCKING
Alongside members of the Faith Village Church of Christ’s Spanish ministry, the Mexicans knocked doors and distributed flyers advertising a nightly gospel meeting at the Texas church.

Targeting Spanish speakers wasn’t easy, said John Fernandez, Spanish and bilingual minister for the Faith Village church. Wichita Falls largely is an integrated city, he said, with Anglo and Hispanic residents living side by side.
Fernadez, a native of south Texas, said his roots in the U.S. date back at least three generations. When he took the job at Faith Village two years ago, his brother jokingly asked him if he even knew how to speak Spanish.
He did, but he acknowledged that he had to brush up on his “Bible Spanish.” Similar to King James English, most Spanish Bibles use words not common in Spanish vernacular, Fernandez said.
Working with the Mexican Christians was a cross-cultural experience for Fernandez and other U.S.-born Latinos, including his in-laws, Rudy and Isabel Sanchez. The couple drove from Needville, Texas, near Houston, to look after their grandchildren and take part in the campaign.
The Sanchezes said they were impressed by the Mexicans’ energy — even when temperatures reached 105 degrees Fahrenheit.
“Of course, the Mexicans door-knock houses with no air-conditioning, and it’s already been 115 there,” Rudy Sanchez said.
The Spanish speakers they encountered in Texas were hesitant to listen at first, Rudy Sanchez added, until he introduced them to the Mexicans.
Then “they opened up,” he said. “You could see their defense shields go down.”
CHALLENGING STEREOTYPES
After a morning of door-knocking and an afternoon of shopping at Mardel, a Christian bookstore, the church members gathered in Faith Village’s large fellowship hall. Outside, bathed in sweat, Billy Harrington flipped dozens of hot dogs on a massive barbecue grill.
He doesn’t speak much Spanish, but when he heard the campaigners were coming, he was the first to say “I’ll cook.”
Harrington’s congregation, the Edgemere Church of Christ in Wichita Falls, supports the Frontera church. Harrington and other church members have visited there.
Members of the Frontera church also make occasional visits to Edgemere. Earlier this year, they devised the idea for a “campana evangelistica” (evangelistic campaign).
Leaders of the Edgemere church, which has no Spanish-language ministry, asked Faith Village to partner in the effort. Harrington housed seven of the Mexicans and cooked daily for the entire group during their weeklong visit.
Members of the Faith Village church, including Kay John, helped out in the kitchen.
“We learned from them humility and kindness,” she said of the visitors.
The Mexican Christians also learned from their hosts, said 22-year-old Alfonso Sanchez, who preaches on occasion for the Frontera church.
“At first, I thought Americans were real racist,” he said, speaking through an interpreter. “Now, when it comes to the brothers at church, I don’t see that.”
“I feel that churches here work more out of love, and churches in Mexico work more out of rules,” he said.
Jennifer Garay, 15, started studying the Bible in Frontera in January and was baptized in April. Months later,

she was a missionary to the U.S.
When asked about her impressions of the U.S., she replied, “They feed us a lot.”
“It’s been a beautiful experience,” she added. “Everyone is so friendly and lovable. Now we have family here.”
FAMILY AND FRIENDSHIP EVANGELISM
After the fellowship meal, the Christians gathered for Wednesday night Bible study — and the final evening of the campaign. As the adults worshiped and prayed in a Spanish-language service, children joined Faith Village’s English Bible classes.
Though the air-conditioning in the auditorium failed, the Mexicans didn’t complain. Silvestre Alfaro, a middle school math teacher and a minister for the Frontera church, preached on the apostle Paul’s letter to the church in Rome — a cross-cultural mix of Jewish and Gentile Christians.
“Even though we are from two separate countries, speak two separate languages, we serve one Christ,” Alfaro said, as Mike Lechuga, outreach minister for the Edgemere church, translated for an English-speaking visitor. “Regardless, we have a common language of the Gospel.”
Among the Mexican and U.S. church members were a handful of visitors from the community. On a previous night, a couple traveled here all the way from Scotland — Texas, that is, a community about 20 miles south of Wichita Falls.

Alfaro’s wife, Olivia, said she was disappointed that their efforts yielded few visitors.
In Mexico, their church has grown through “friendship evangelism,” she said, with members reaching out to their immediate family and neighbors.
She hopes that, in years to come, church members on both sides of the U.S.-Mexico border can build friendships in the community that lead to lifelong devotion to Christ.
“The Great Commission to go into all nations starts in the family,” she said. Regardless of how many respond to the message, “we shouldn’t be discouraged. Our job is to go.”