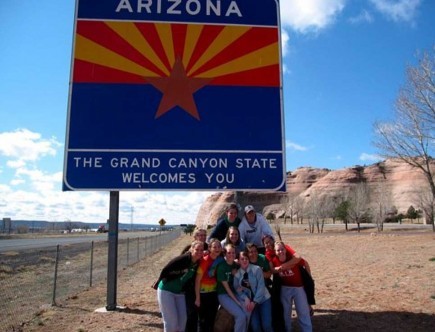 Erik Tryggestad
Call it an alternative to alternative spring break.
Members of the Edmond, Okla., church intended to spend a week pouring concrete floors in the homes of the needy, performing vacation Bible school skits for children and living in tents in the Mexican countryside, near the village of Aquiles.
But reports of border violence persuaded the church’s elders to reduce the number of participants in this year’s Mexico mission. Instead of the usual compliment of more than 200, only three adults from the church made the journey to Aquiles.
So 78 of the church’s college students, youths and parents traveled instead to Arizona, where they worked with Neighborhood Ministries in Phoenix. The group organized donated clothes and vacation Bible school materials and cleaned homes and trimmed yards for low-income families. They also helped lead services at the Canyon church in nearby Anthem, Ariz., and handed out 10,000 flyers about the congregation.
“Through all of this, we met a lot of people in need and helped them with whatever we could, including shoveling gravel at a family’s home who some of our men met while handing out flyers,” said Amber Grubb, a college student and intern with the church’s campus ministry.
Whether churches cancel mission trips because of security concerns or the faltering U.S. economy, Christians need not leave the country to find meaningful short-term work, ministers told The Christian Chronicle.
South Texas, for example, is full of opportunities to serve, said Chuck Owen, minister for the Northside church in Laredo. Located just miles from the Mexico border, the city has many “colonias,” or Latino neighborhoods, in need of assistance.
“There are plenty of areas in and around Laredo that good work could be accomplished — short of crossing the border,” Owen said.
Abel Alvarez, minister for the Harvey Drive church in McAllen, Texas, agreed, noting the impoverished, Spanish-speaking communities in McAllen in need of mission teams.
“You can have the Mexico experience without going to Mexico,” he said.
As the Edmond church’s Arizona trip concluded, participants spent a night telling stories about how they experienced God through the week, Grubb said.
“Everyone realized that, though the trip turned out to be nothing like we had planned, it had been exactly as God had planned,” she said.