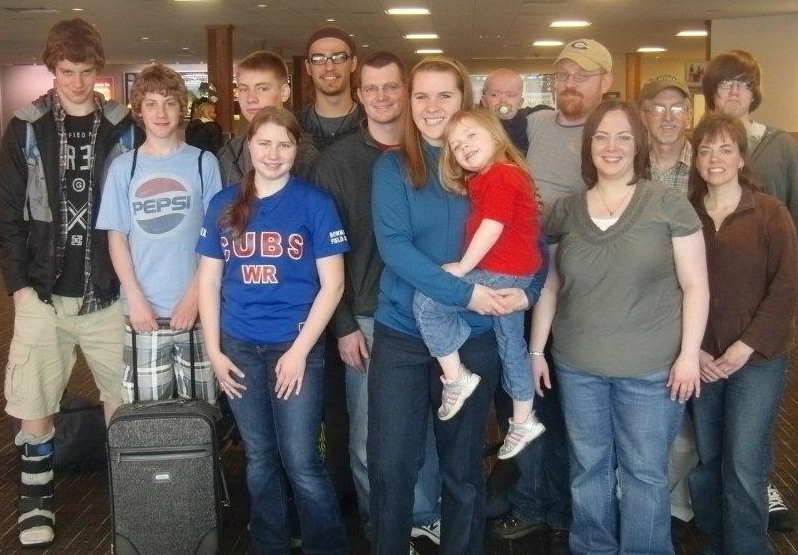 The mission team from Alaska. (Photo via bakersinleon.blogspot.com)

As difficult as this may be to believe,  journalists — even Christian journalists — sometimes drop the ball.
Five months ago, way back in late June, Christian Chronicle reader Pete Baker shared details with me of an an inspiring story involving two Churches of Christ in Alaska and a congregation in Mexico.
I thanked Baker and assured him we’d include mention of this news in the next Chronicle.
Somehow, we didn’t.
I realized this as I was going through my old e-mails this week. When I couldn’t find any mention of the story in our archives, I contacted Baker again to ask if we’d published anything. He replied:

I don’t it think ever made it into the Chronicle, but I understand how it is with journalism. There are so many stories out there.

That is true, but I hate it when we miss an important story.
Under the category of “better late than never,” I’d like to share the original item that Baker submitted June 26 of this year (slightly edited to fit our style):

A combined group from the Valley Church of Christ in Wasilla, Alaska, and the Juneau Church of Christ in Alaska returned this week from a successful eight-day mission trip to Leon, Mexico. (The eight days do not include three travel days.) Group members felt that they succeeded in achieving their goals of glorifying God, encouraging the Iglesia de Cristo Leon Gunajuato (Leon Church of Christ) and growing in their personal relationship with God. Most of the young people had never traveled outside the U.S., other than Canada, and had their eyes opened to life in a different culture. Working in a children’s home and two low-income housing projects allowed them to see that young people living in poverty are able to live without the things most American youth acquire or desire.
One primary activity of the group was to assist the Leon congregation in preparing a new, rented building in the city center for a first worship service on June 24. Over several days, the group cleaned, painted and generally lent a hand to members of the congregation working on the building. The Leon congregation, led by elders Martin Galvan and Roberto Rubio, changed its name from Iglesia de Cristo Leon Sur (Leon South) to Iglesia Cristo Leon Guanajuato to indicate the change in location. The church ended its lease on the former building when the owner decided to sell.
A particular highlight of the week was a “welcome home” fellowship for Beto Rubio (Roberto Rubio Jr.), who graduated in May from the Quito School of Biblical Studies in Ecuador. The fellowship meal ended with the Alaska group singing in English to their Mexican brethren who responded in song in Spanish with both groups eventually singing well-known songs of praise in both languages. It was a very moving moment and symbolic of our unity in Christ despite the barriers of language and culture.
Missionaries Ben and Jazmin Baker, with input from missionaries Omar and Tana Palafox, planned and coordinated the group’s activities. Activities were centered around involvement with members of the congregation, which led to visiting a children’s home where Emma works and two low-income housing projects where Manolo Rosas and his brother Luis work. Manolo and Luis are passionate about bringing Christ-centered values to families in these communities. Notably, the Juneau congregation raised about $3,000 for use in benevolence efforts, which included the children’s home and the Canada Del Real community.
The group of 14 included young people accompanied by adults from the Alaska congregations. Among that number, the Juneau congregation included their summer intern, Branson Hartshorn, an Oklahoma Christian University student. Former Adventures in Missions (AIM) missionary interns Annie Kate Jones and J’lae Merritt joined the team in Texas to assist in translating. Jones and Merritt served with Ben Baker on an AIM team in Leon from 2007 to 2008. Evelyn Galvan and Rafael “Rafa” Espindola, Leon members who just returned from their AIM field time in Scotland also spent time with the Alaska group.
Most Americans are unfamiliar with Leon since it is not a tourist destination for Americans. Leon is an urban center of between 3 and 4 million people located in the center of the country in Gaunajuato state. Guanajuato state is devoutly Catholic, and the city of Leon was recently in international news when the people visited in March of this year. We appreciate the parents who allowed their kids to travel to Mexico after having considered the negative news related to the drug problems in parts of Mexico and balanced that against the reality on the ground in Leon. That is an act of faith in God’s ability to keep his promises.

Read more about the trip on Ben Baker’s blog.
See the Chronicle’s May 2012 front-page story on the rocky road for missions in Mexico.