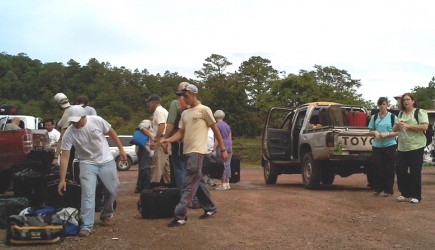 Erik Tryggestad
Hours after a presidential ouster in Honduras, workers with Churches of Christ hurriedly packed U.S. campaigners for a quick exodus from the Central American nation.
“We made frantic flight changes this morning and sent the 60 folks who arrived in Honduras on Friday back to the capital to get on afternoon flights to the U.S.,” said Jarrod Brown, president and founder of church-supported Mission Lazarus, in a June 29 e-mail from Choluteca, Honduras.
Brown made the decision “not because the situation is very dangerous now … but rather because no one knows what will happen.”
“I hope and pray that we have overreacted by sending the groups home,” Brown said, “but, as the old Spanish saying goes, ‘The man who takes precautions is worth two men!’”
Brown and his wife, Allison, have worked in Honduras since 2001 and have two young children, Soledad and Levi. The Crieve Hall Church of Christ in Nashville, Tenn., sponsors the family.
On Saturday night, June 27, Jarrod Brown was in a hotel room in the capital, Tegucigalpa, sending an e-mail to a group of church members preparing to lead teams to assist Mission Lazarus this summer. The ministry partners with native Hondurans to provide educational, agricultural, medical and spiritual support for the country’s people.
“The general gist (of the e-mail) was not to worry, nothing is going to happen,” Jarrod Brown said. “I awoke the next morning to the sound of fighter jets (and) helicopters.
“And as I looked out my hotel window there was an enormous plume of smoke rising in the distance,” he continued. “Soon tanks and armored vehicle would move down the streets. I could not believe what I was seeing.”
On Sunday morning, June 28, Honduran military troops stormed the presidential palace to remove Manuel Zelaya from office. Zelaya, who was in office since 2006, previously had called for a referendum that could have led to an extension of his four-year term in office, according to news reports.
Honduras’ Supreme Court had ruled the referendum was illegal, and the nation’s Congress voted not to hold it. Zelaya disregarded those actions and vowed to hold the vote anyway. Polls were due to open on Sunday, but instead troops detained Zelaya and flew him to Costa Rica. Hours later Roberto Micheletti, president of the Congress, was named provisional president.
Ministries in Honduras host frequent visits by members of Churches of Christ in the United States — especially during the summer months. The Central American nation, with a population of 7.2 million, has served as a focal point for church missions since 1998, when Hurricane Mitch destroyed much of the country’s infrastructure.
Phil and Donna Waldron moved to Santa Rosa de Copan, Honduras, last month to launch Mission UpReach, a church-planting ministry.
“Our power has been out as well as the TV channels,” Donna Waldron wrote in an e-mail to supporters. “It is a very complicated scene, but we are fine. We are in a very calm area where the people hardly even feel connected to the capital or the leaders of the country.”
Other workers in Central America shared similar stories with The Christian Chronicle on Monday.
“I am 10 miles south of the border in El Salvador,” Ralph McClurg, a church member from Springfield, Mo., said in a Facebook message to the Chronicle June 29. McClurg is overseeing the distribution of medical equipment and school supplies for the Salvadoran people.
“People here are watching, and there is talk of closing the border if it gets any worse,” McClurg said.
Workers coordinating mission trips to Honduras this summer are doing likewise.
“One volunteer group from Oklahoma is working in the mountains this week, and their return plans are being carefully monitored,” said Martha Rivera, executive director of Predisan, a church-supported medical mission in Catacamas, Honduras. “A group from Atlanta due to travel to Honduras on this Thursday, July 2, has cancelled its trip.”
“However, if you have a trip planned to Predisan later in the summer, please do not cancel your trip at this time,” Rivera said, “and we will be in close touch about developments as they occur.”
Jarrod Brown, who plans to host several U.S. teams later this year, made a similar appeal.
“Satan would love to take advantage of this situation to mess up the plans of many Christians this summer,” he said. “We have spent thousands of dollars on supplies for groups and have spent countless hours getting prepared. However, we also want to err on the side of safety.
“This week will be a very important week to see what will happen here,” Jarrod Brown said.
See Web sites maintained by Honduran ministries, including www.missionlazarus.org and www.predisan.org for information on the status of upcoming trips.
Are you in Honduras, or do you know someone who is? Are you planning a mission trip there this summer? Please contact Assistant Managing Editor Erik Tryggestad at [email protected] with more information.