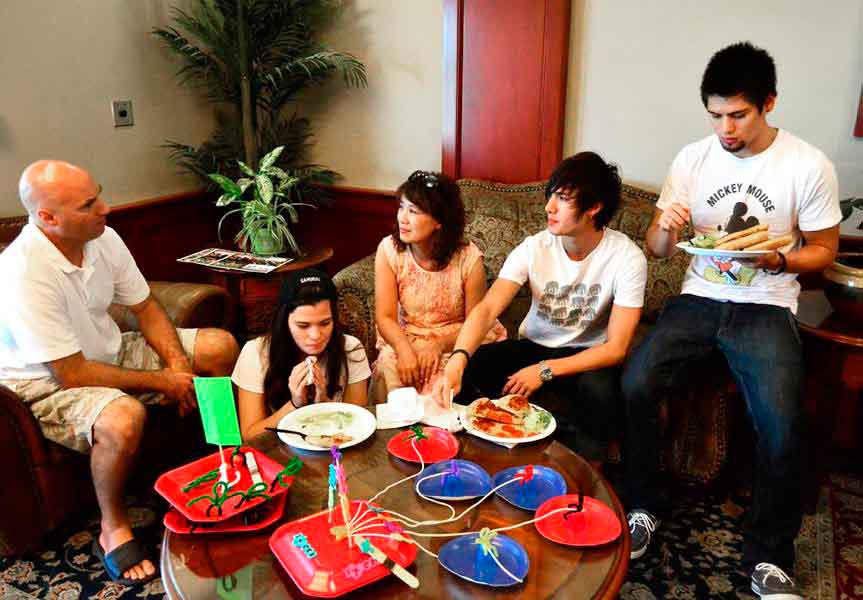 The Edmond Sun in Oklahoma reports on the annual Global Reunion camp for Third-Culture Kids at Oklahoma Christian University.

Mark, Caroline, Mayumi, Christian and Charlie Hancock moved to Dallas in 2010 after spending 17 years in Japan. They attended Global Reunion 2012. (Photo by Thad Ayers, via www.edmondsun.com)

(Though) coming back to America isn’t difficult to do physically, the emotional and cultural strain is something else. That’s especially prevalent for children, who are often called third culture kids.
Nancy Hartman and her husband Kent started a week-long camp at Oklahoma Christian University called Global Reunion seven years ago. The aim is to help children ages 13 and older and their parents figure out how to cope with the culture shock of moving back to America from other countries.
What happens, Nancy said, is parents are coming home, but their children are not. The children are often leaving friends, school, sports and a culture they are comfortable with for completely unfamiliar territory.
“They’re not glad and they’re not home because they just left everything they know,” Nancy said.
…
So Global Reunion, co-hosted by missionary care group InterMission (a missionary care group overseen by church members), OC and the Memorial Road Church of Christ, was started. This year the camp gives military, business and missionary families returning from 20 countries tools on how to cope with becoming American.

Read the full story.
Back in 2001, I interviewed one of the Hartman’s daughters, Heidi, about her experiences as a Third Culture Kid. (It was the first real interview I conducted as a reporter for The Christian Chronicle.)
In 2010, I interviewed Cherry Hart, the daughter of longtime Church of Christ missionaries Eldred and Jane Echols and one of the organizers of Global Reunion.