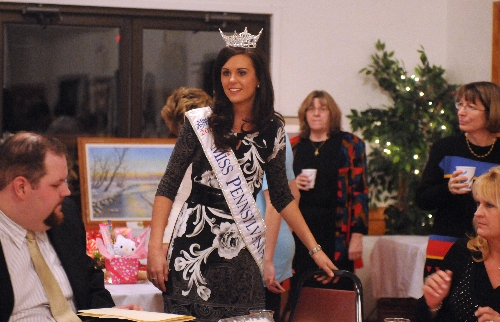 Miss Pennsylvania Courtney Thomas speaks Saturday at a fundraiser in Douglassville for Camp Manatawny. (Photo by Lauren A. Little, Reading Eagle, via www.readingeagle.com)

The Reading Eagle in Pennsylvania reports:

Courtney Thomas, Miss Pennsylvania 2010, spoke in Douglassville on Saturday to help raise money for a Christian camp.
Thomas, a senior at Drexel University, Philadelphia, spoke at Garrett Hall with patrons of Camp Manatawny.
The proceeds benefit campers who needed money for a 2011 summer camp. Camp Manatawny is operated by Delaware Valley Christian Camp.

Read the full story.
As The Christian Chronicle reported previously, Thomas is a member of the Brookville Church of Christ and will compete in the Miss America Pageant in January.
See a September 2009 feature on Christian camps that includes Manatawny. I visited Manatawny in 2009 and met Doug Edwards, who called me after the Chronicle’s item on Miss Pennsylvania appeared, hoping to contact her and invite her to speak at the fund-raising event.