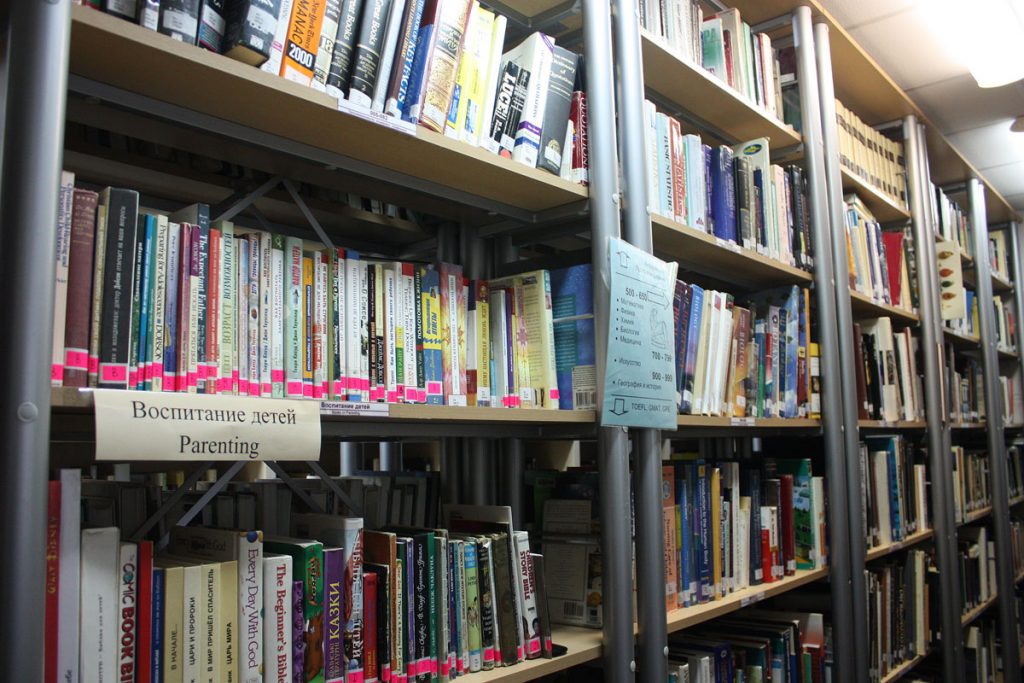 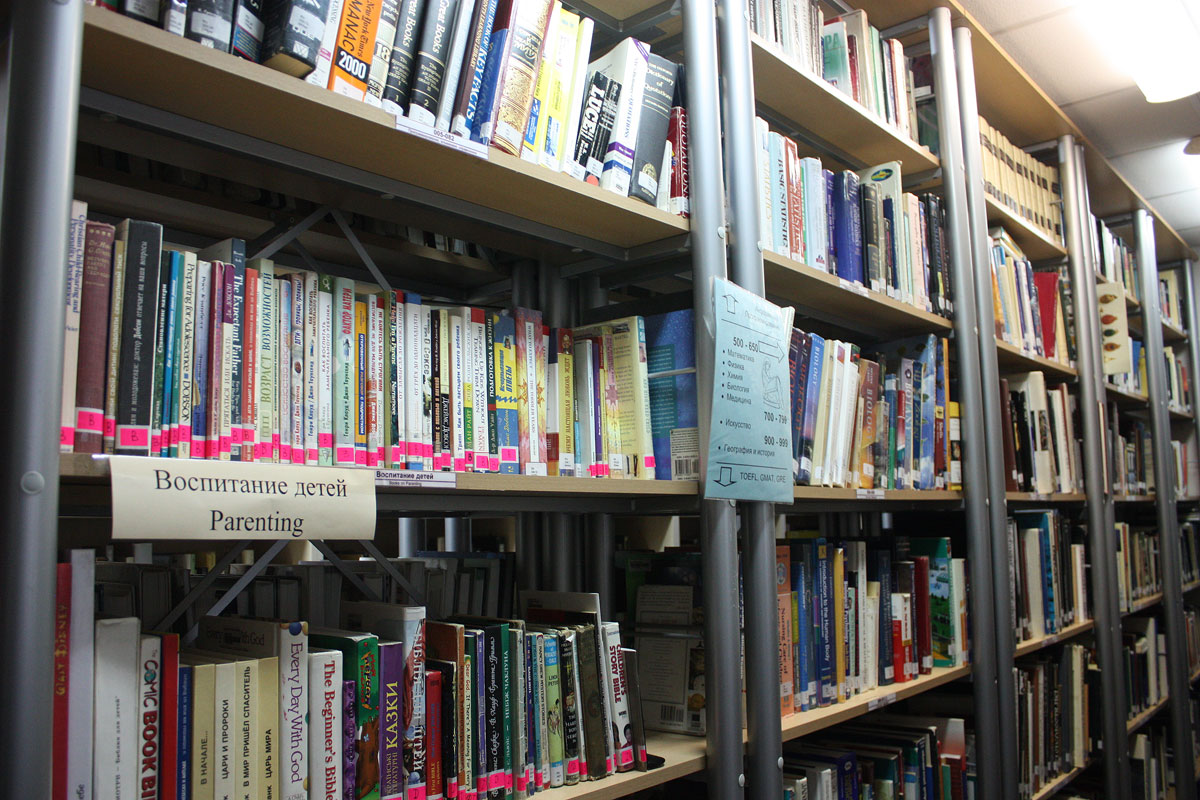 Books line the shelves of the Ukrainian Education Center in Kiev, Ukraine. (Photo by Erik Tryggestad)

Blogging live from Kiev, Ukraine
I’m sitting in the Boryspil International Airport waiting for a flight to Amsterdam — the second leg of my journey home from Ukraine after a 10-day reporting trip. (It’s a bit hard to think in here. For some reason, there’s a rock band filming a music video in the airport terminal. Ah, the joys of international travel.)
After an early-morning flight to Kiev from Ivano-Frankivsk, Richard Baggett of Eastern European Mission and I got a quick tour of the Ukrainian Education Center, or UEC, a church-supported ministry that serves the university community here in Kiev. Vitaly Samodin and his wife, Valeria Cherednichenko, serve as the center’s directors. They worship with the Nivky Church of Christ in Kiev. 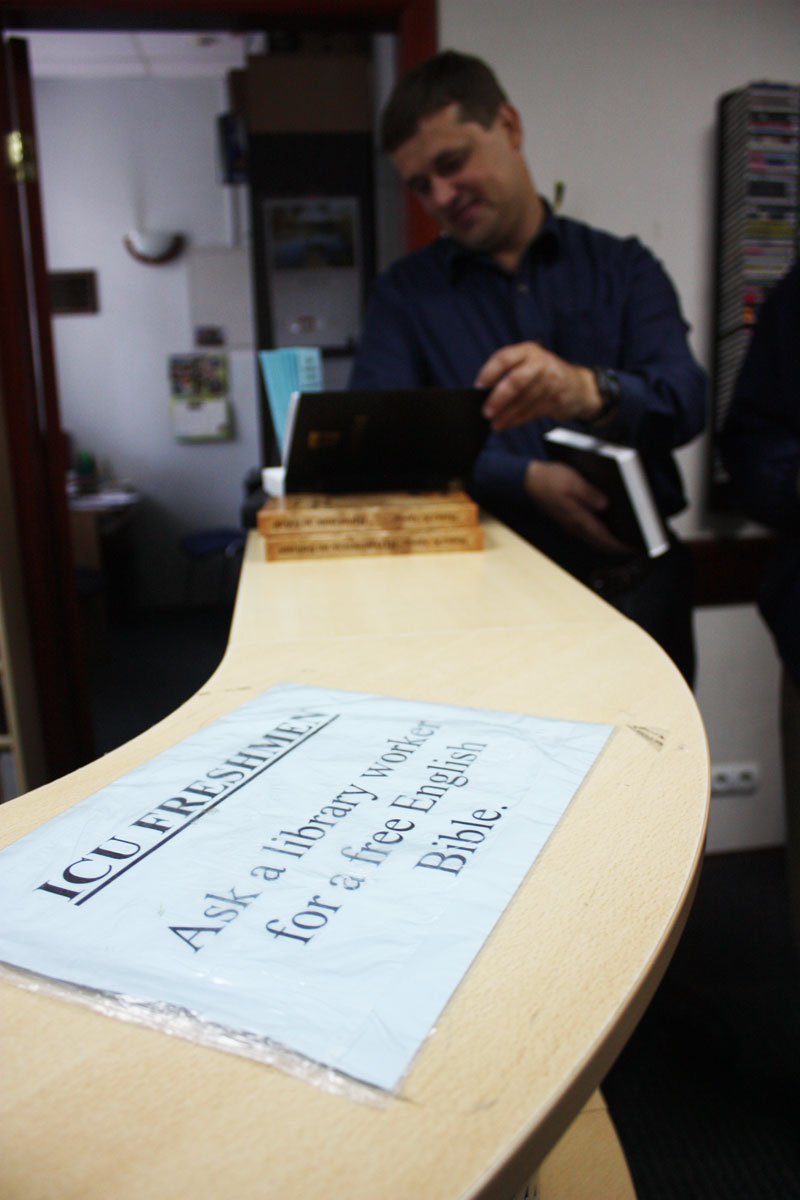 Vitaly Samodin picked us up at Boryspil and navigated Kiev’s rush-hour traffic (no easy feat) to show us the center, located within walking distance of a medical school, business university and polytechnic school. Every day anywhere from 50 to 100 students stop by the center to use its computer terminals and free wi-fi network, make tea in the kitchen or peruse its collections of books on Christian living.
Samodin, other UEC staffers and church members conduct English conversation lessons and Bible studies here. The center also hosts teams from the Let’s Start Talking ministry. The universities draw students from around the globe, and the UEC has become something of an international hub. (I met some believers from places you wouldn’t expect to find believers. More on that another time, perhaps.)
Most importantly, the UEC has resulted in transformed lives and baptisms, Samodin said. He shared several stories of students who came to the center after life dealt them a blow, including the loss of a parent. Now those students are active Christians who are sharing their faith with their families.
In Ukraine, “there are still lots of people who are genuine seekers,” Samodin said.
Samodin himself was a seeker when he came to the U.S. years ago as an exchange student. After returning to Ukraine, he enrolled in the country’s branch of International Christian University, a church-supported program based in Vienna, Austria. At the university’s Kiev branch, he was exposed to the Gospel by teachers including U.S. church members Chris Lovingood and Ken Kirby. (Both were classmates of mine at Lipscomb University. Lovingood and his wife, Lena, were the previous directors of the UEC. It’s a thrill to see their legacy living on.)
After the tour, as we waded back into Kiev’s bumper-to-bumper traffic, I caught a first glimpse of home — a restaurant in downtown Kiev modeled after the historic Route 66 that runs just north of my house in Oklahoma.
The real thing will be a welcome sight. 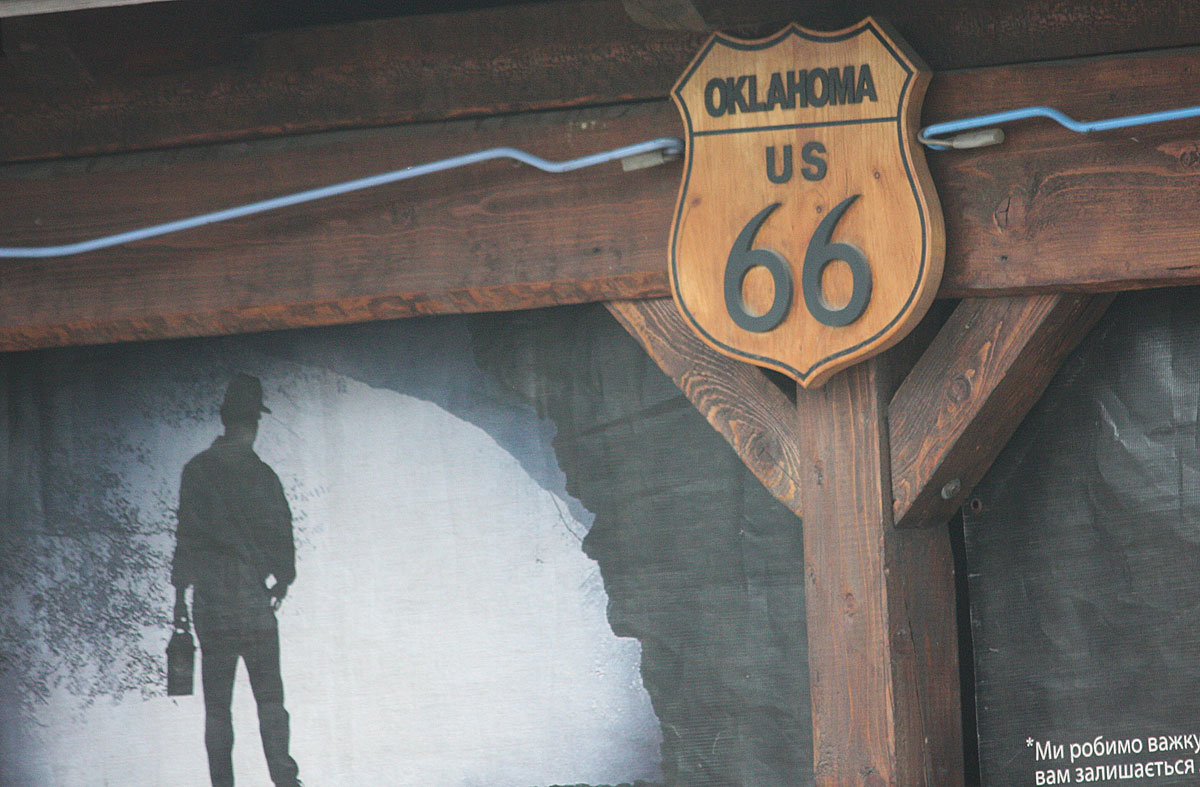 A sign for Oklahoma’s Route 66 beckons from a restaurant in downtown Kiev. Notice the Ukrainian writing. (Photo by Erik Tryggestad)