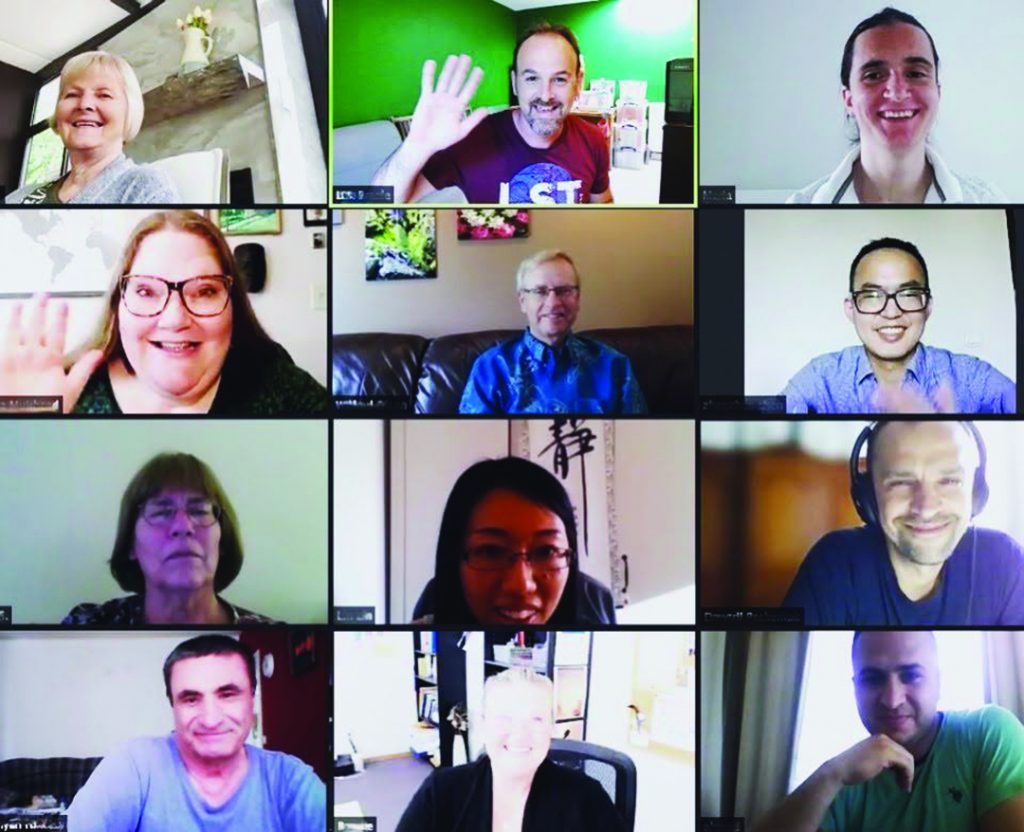 For over a year, flagship nonprofits, schools and publishers walked the gauntlet of remote work, sick employees and layoffs.

‘All our plans were wrecked, but God still used it.”

Ryan Lee, director of One Kingdom, was describing how the disaster relief ministry he leads responded to a global pandemic. But he spoke for many when he said, “We were on our heels a little bit in 2020.”

The ravages of COVID-19 seem to be winding down. Businesses are open again. In most parts of the country, masks are less common. Schools are preparing to reopen this fall to in-person instruction. Recovery is happening.

“All our plans were wrecked, but God still used it.”

For over a year, flagship nonprofits, Christian schools and publishers associated with Churches of Christ walked the pandemic gauntlet of remote work, sick employees and layoffs.

But now, most are emerging with renewed, though altered, focus.

Let’s Start Talking, which focuses primarily on international missions, took big hits, financially and to its staff. However, LST is in “a really good place,” said Craig Altrock, senior director who has been with the Hurst, Texas-based ministry since 1998.

Launching LST Connect, an online outreach, meant hundreds of readers and workers were meeting online even though traveling and meeting in person was not an option.

“It had been happening anecdotally in the past but was not something we had given a lot of attention to,” Altrock said. “There are lots of ways for people to do international work these days, and we already felt some strain before the pandemic.”

Pre-pandemic, the group sent 300 to 400 people per year on short-term missions with a budget of about $1.5 million. In 2020, that dropped to about $500,000. Donations declined slightly, but loss of program revenue was the biggest hit.

Layoffs reduced the staff from 14 to four, although a bookkeeper has been added back.

“We have had good numbers as things are opening up in the U.S., and our work with local churches is restarting.”

The board decided to sell a building LST owned. Altrock, his wife and three children all tested positive for COVID-19 during the Christmas holidays. Every member of the remaining staff or someone in their family has had it.

It was a hard year.

But Altrock said, “All those decisions were made so LST would have a future. We are very stable financially. We have had good numbers as things are opening up in the U.S., and our work with local churches is restarting.”

Altrock said LST will approach missions more strategically.  “We’re not trying to get back to normal. There isn’t a normal.” 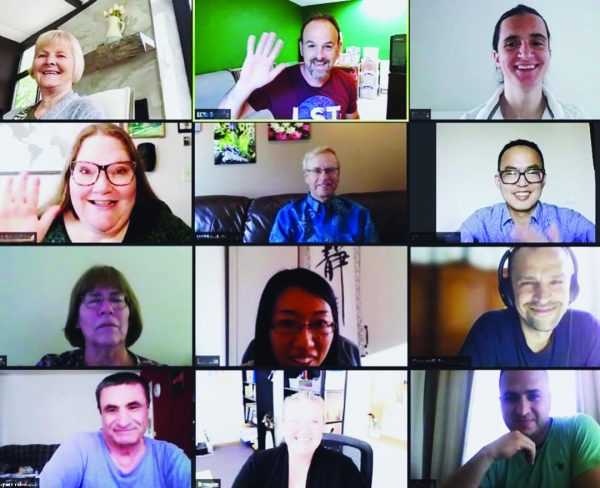 Herald of Truth also had fewer donors in 2020, but Greg Swindle, president and CEO, said, “God made it up in other ways. We had a lot of estate gifts, and some new churches came on board. And that’s what we’re trying to do -— build up more relationships with churches.”

Once known as a radio and television ministry, Herald of Truth had long since turned its attention to the digital world to stimulate evangelism in the U.S. 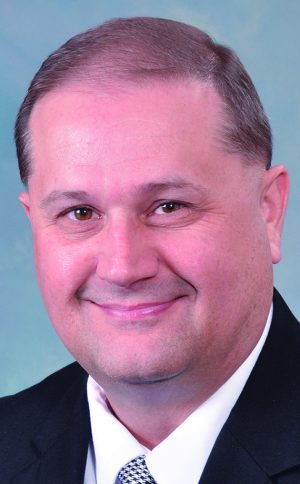 Swindle said Herald of Truth spends over $1 million annually on ministry, relying primarily on content shared through social media, smart phones, web and other platforms. It works with churches in major cities to share the Gospel.

Based in Abilene, Texas, Herald of Truth’s U.S. staff of eight is scattered across the country. Five others work internationally -— in Cuba, Africa, Central America and Spain.

Swindle, who was a missionary in Zambia before joining Herald of Truth three years ago, lives in Columbia, Tenn. No employees were laid off during the pandemic, he said, and the board decided not to accept government stimulus funds.

“Overall, it was very good for us,” Swindle said of the pandemic, and “actually accelerated our plans.” 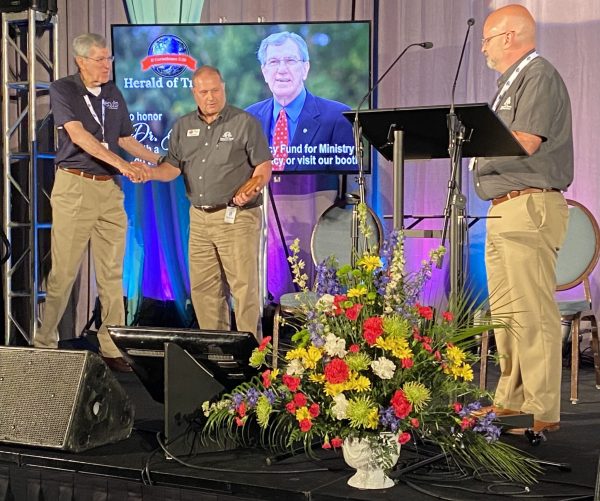 Elementary and secondary schools associated with Churches of Christ also benefited from the pandemic’s impact, according to Brandon Tatum, executive director of the National Christian School Association based in Edmond, Okla. 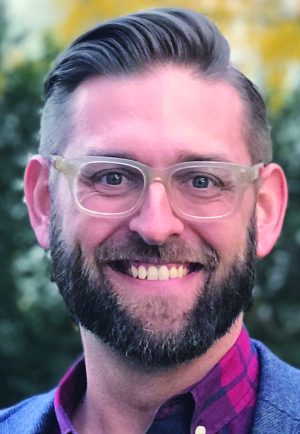 Many of the roughly 100 member schools remained open for face-to-face instruction in communities where public schools had to pivot to remote learning, Tatum said.

NCSA does not track employment numbers for member schools, but Tatum said the government-funded Paycheck Protection Program “saved a lot of jobs” as schools struggled to deal with other pandemic-related expenses, such as smaller class sizes, technology for remote learning and enhanced cleaning.

Tatum is optimistic that some families who moved their children to Christian schools will remain. Among the 52 accredited members, a total enrollment in May 2020 of 22,146 is expected to increase by about 800 students in the coming year. 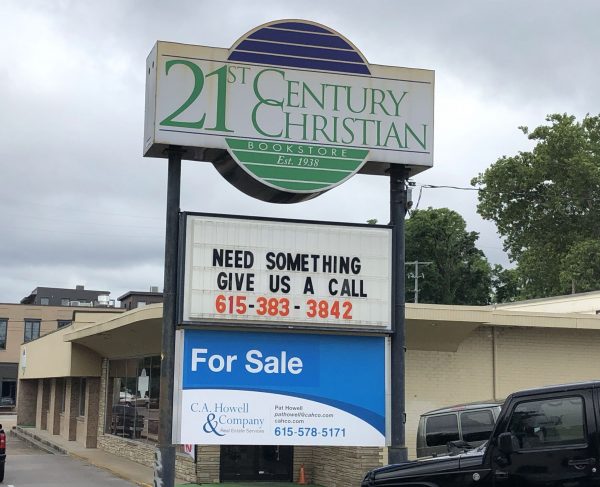 A “For Sale” sign can be seen at the 21st Century Christian Bookstore in Nashville, Tenn.

Bookstores already were in trouble

Perhaps no sector was harder hit by the pandemic economy than Christian books and publishing.

“Even before the pandemic, we were seeing declines in sales and in church membership and church existence,” he said. “The numbers of Churches of Christ were fewer in 2019 than in 2015 and 2012.”

The national directory of Churches of Christ published every three years by 21st Century Christian was last released in 2018. The survey preceding the planned 2021 directory had been scheduled for 2020.

“The directory is not going away,” McInteer said, “but we made the decision that with churches not meeting and people not being in offices, the numbers would be kind of meaningless. Would people even know how to respond, what their membership looks like? It wouldn’t be a great snapshot in time.”

Declines in churches and church memberships inevitably affect a publisher that develops and sells curriculum for Sunday School and Vacation Bible School. 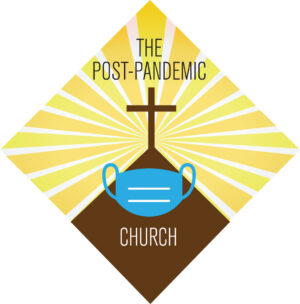 Click image to find more stories from this series.

And that impact is not limited to publishers closely connected to Churches of Christ, McInteer said, noting that religious retailers such as Cokesbury, Family Christian and Lifeway were closing bookstores years before the pandemic.

Then in March 2020, 21st Century Christian saw sales drop by more than 75 percent as churches beset by COVID-19 and the accompanying restrictions went online and cancelled orders. Curriculum sales fell over 80 percent.

Staff was reduced, and the Nashville retail store closed for a while. Although it’s open again, McInteer expects a smaller presence in the future because fewer people are buying books in stores.

Subscribers received the December 2020 issue in April of this year, and no 2021 issues had been received by mid-July. No one from Gospel Advocate was available to be interviewed for this story, but a customer service representative said 2021-2022 curricula will be shipped in August.

The timeframe for recovery varies from ministry to ministry.

Though 21st Century Christian is a business, not a nonprofit, McInteer said it’s always been a ministry.

“We’ve tried to be pretty transparent with customers as far as what we’ve gone through,” McInteer said. “We intend to continue to do what we’re doing as long as the Lord lets us.” 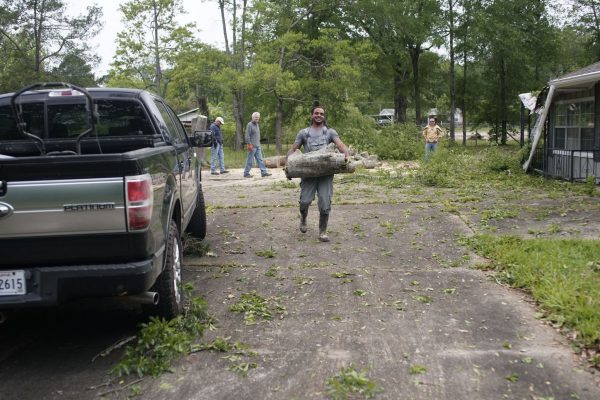 In spring 2020, One Kingdom volunteers work on tornado relief in the Monroe, La., area.

A new level of flexibility

The pandemic required a new level of flexibility for One Kingdom, Lee’s ministry at the White’s Ferry Road Church of Christ in West Monroe, La..

One Kingdom shifted its efforts to disaster relief in 2020. Hurricanes and tornadoes, including twisters in the ministry’s own community, didn’t go away during the pandemic.

The focus shifted to providing resources such as food and medicine that people needed to survive, Lee said. 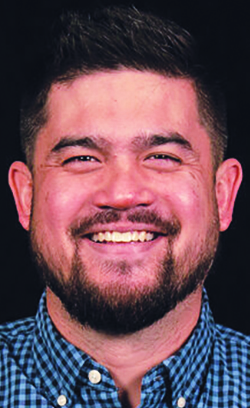 Besides disaster relief, One Kingdom ministries include biblical work and training and cultural development. World Radio, formerly a separate entity, remains a part of the organization with about 100 Christians preaching the Gospel worldwide via radio.

“We try to teach people about Jesus through everyday life,” Lee explained, “through agriculture, through radio broadcasts, teaching them the work they do is also worship.”

He joined One Kingdom in 2016 and became director in 2020. His wife and some of his six staff members got COVID-19, but all have made full recoveries. And no one was laid off, in part because several donors long ago allowed the organization to set up trusts to cover staff and overhead so that more than 90 percent of donations go directly to mission fields.

“We had one of our best fundraising years in our history, which was not something we expected,” Lee said. “I think everybody was able to empathize because we were going through the same struggle together.”

He and the other ministry leaders acknowledge their organizations will look different. They hope to be more agile, more responsive to circumstances and better prepared to achieve their missions.

Lee believes it will happen.

“We’re getting back to being on our toes instead of our heels.”

Chronicle receives blessings in the midst of pandemic 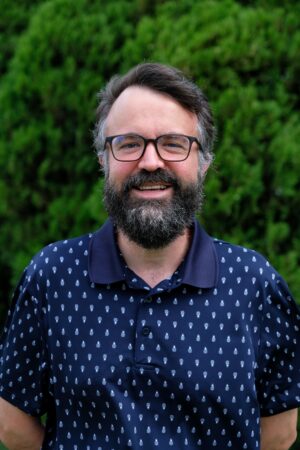 As the pandemic set in, I knew The Christian Chronicle would lose revenue since many of our advertisers buy space to promote events that had to be canceled. Our advertising manager, Tonya Patton, offered discounts so the ministries that advertise with us could keep their names — and their needs — in front of our readers.

An unexpected and incredible wave of generosity followed. Time and again, our donors stepped up to fill the funding gap and keep this newspaper going. Longtime supporters and new givers alike told us that in the midst of the pandemic, the ministry of the Chronicle was a tremendous blessing. We recently entered a new fiscal year on solid financial footing.

I’m extremely thankful to our hardworking staff, our dedicated board and all of our readers who blessed us during these troublesome times. — Erik Tryggestad, president and CEO, The Christian Chronicle 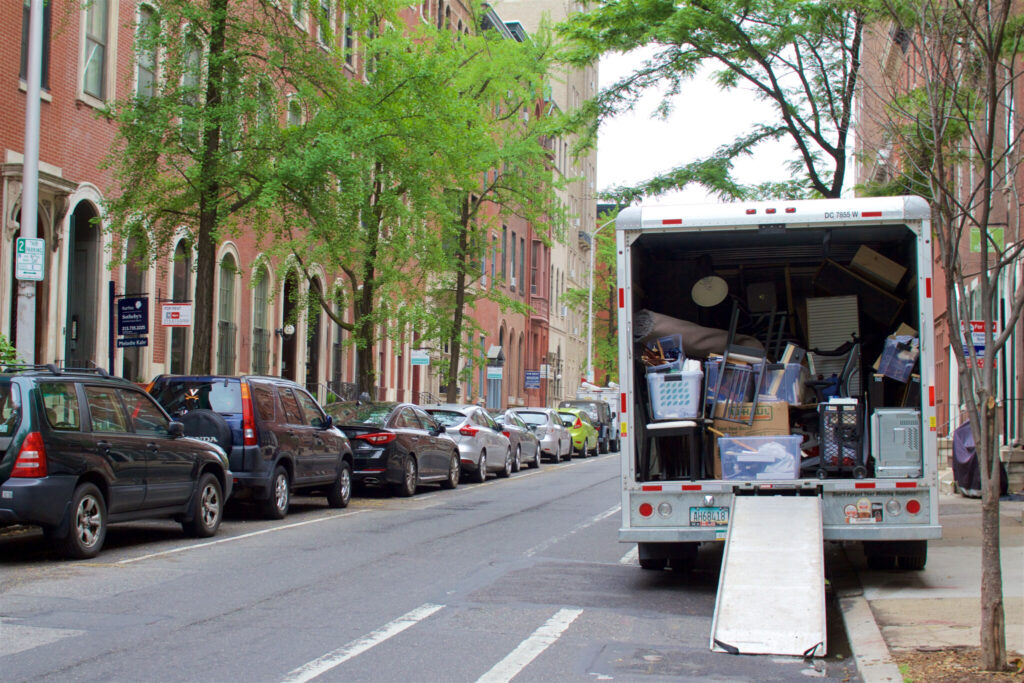 Visiting vs. virtual: Moving during a pandemic complicates hunt for church home