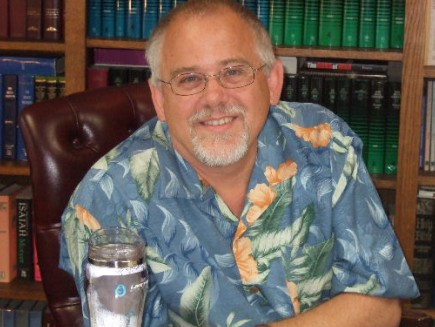 Beth Watson Drinnen
KNOXVILLE, Tenn. — Mark Smith, minister of Laurel Church of Christ, is not the kind of guy that gets lost in the crowd.
A friendly man with an easy smile, Mark has a penchant for Hawaiian shirts. “I have way over 100 of them,” he said. “Probably closer to 150.”
Some are shirts he’s bought himself.
“I buy every Hawaiian shirt that Sam’s comes out with – in all the colors it comes in,” he said, laughing.
One of his favorites, an orange-and-white floral with the University of Tennessee’s Power T, was given to him by a member of the congregation when he first arrived at Laurel.
Oddly enough, the member bought it in Florida. Mark started wearing the shirts while a minister in Orlando because he never felt comfortable in “more traditional, ministerial-type” clothing.
“Hawaiian shirts, to me, convey a message that says, ‘I’m approachable, I’m a regular person. We’re all in this together,’ ” he said.
“I think that some people see ministers as people who are great experts and who somehow have insights and knowledge that other people don’t have. I’m not any smarter than anybody else, I just have a calling to work with people; to try to get them to lead spiritually healthy lives. Besides, they’re comfortable!”
While most people love his offbeat style, not everyone appreciates it. Robin, Mark’s wife of 32 years, laughs and says, “I have absolutely no luck getting him out of his Hawaiian shirts. In all honesty, I have been threatening for years to turn him in to the ‘What Not to Wear’ show. I thought that moving to Tennessee would finally break him. But the church just embraced it.”
Although he wears more traditional clothing on the typical Sunday morning, he is quick to say, “We have a large group of college students, and I have promised them that when UT beats Florida in football, I will preach in my Hawaiian shirt the next day.”
Mark said one of the big struggles the campus churches faces is balancing the spiritual needs of all the members – youth, college age and those a bit older.
“We’re not totally there yet, but we’re close. We’re really working on it,” he said.
Mark and Robin must be doing something right. When the couple recently celebrated their one-year anniversary with the church, the congregation threw them a reception. Everyone wore Hawaiian shirts.
(Story and photo used with permission.)