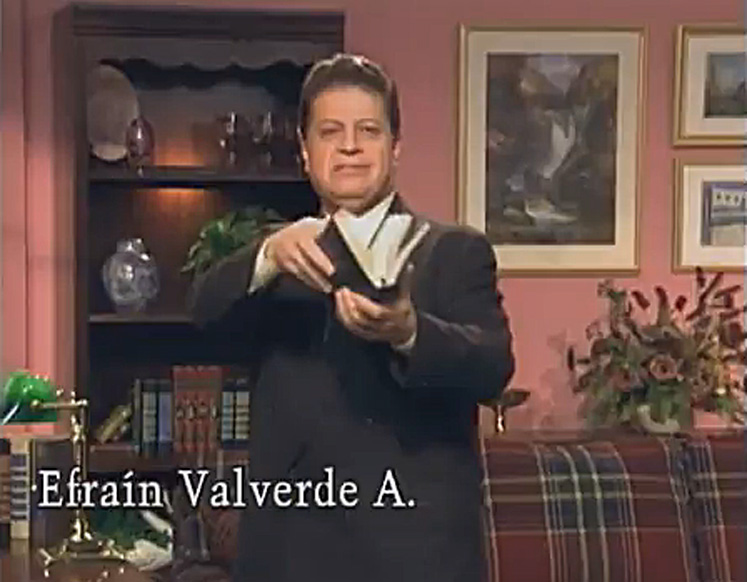 Update: Rex Morgan wrote a brief tribute to Efrain Valverde. (See below)
Efrain Valverde, longtime minister, writer and host of “Con La Biblia Abierta” (“With the Open Bible“), died Sunday, Sept. 4, after a long battle with cancer. Valverde, 74, was a member of the Hialeah Church of Christ in Florida.
A memorial service is planned today — Sept. 6 — at 8 p.m. in Miami Lakes, Fla. We will post more details as we get them.
Rex Morgan, of Hialeah-based Christian Productions International has worked with Valverde since 1989. Valverde appeared on 137 episodes of “Con La Biblia Abierta,” a Spanish-language program that features Bible studies and conversational-style discussions of issues Christians face. The program appears on televisions in 20 countries and all 50 states of the U.S., Morgan said.
Thousands of viewers have requested World Bible School study material as a result of the program, Morgan added. Church members will continue to air shows as a tribute to Valverde’s legacy.
A video produced by the Madison Church of Christ in Tennessee gives more details about the work of Valverde and Morgan.

Brother Efrain Valverde passed to be with the Lord on Sunday, Sept. 4. He is survived by his wife Enid, three sons and a granddaughter.
He became a Christian in 1966 and started the first Church of Christ in San Jose, Costa Rica, where he remained preaching until 1979. He and his family then moved to Venezuela in order to work as a missionary there. In 1982 he finished his work in Venezuela and came to work in the United States with the Spanish literature ministry and Western Christian Foundation in Wichita Falls, Texas. While there, he wrote Spanish books and tracts and translated others from English. Then, in 1985, Efrain joined with Rex Morgan, Carl James and others who had formed a mission team in Miami that came to be known as Miami Spanish for Christ.
Efrain put his writing skills to use as script writer for the television program “Con La Biblia Abierta” (“With the Open Bible”). He is also the teacher and host in each of the 137 episodes produced. Today the program continues on the air every week in 21 counties including all 50 of the United States. As a result, hundreds of viewers continue to enroll in World Bible School and local churches encourage friends and neighbors to tune in. A listing of broadcast networks and times can be found at the ministry’s blog
There is no doubt that this television program is known as a classic that will continue to reach the lost. It has helped us understand that the power of the Word entering into people’s lives through media can reach people that perhaps would never come to know Jesus otherwise. Christian Productions International, directed by Rex Morgan, will continue broadcasting these fruitful programs. This ministry also is empowering local evangelists with the DVD versions. A radio hour, “La Voz Alegre” (“The Happy Voice”) also is being produced in partnership with World Christian Broadcasting. It will reach all of Latin America. This radio hour will include lessons taught by Efrain Valverde.
We honor Efrain Valverde for his many contributions to this media ministry and ask everyone to keep his wife Enid in your prayers during this difficult time.