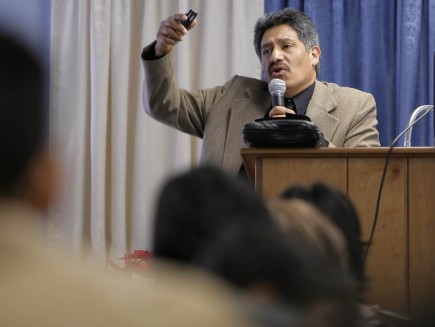 Bill Sherman
TULSA, Okla. — It’s been a long journey for Tulsa minister Jose Lozano, who left Mexico City as a young man in search of a better life.
He found that life, in a way he did not expect, when a co-worker at a factory in Oklahoma City started talking to him about Christ and invited him to church.
Lozano accepted that invitation, not realizing it would redirect his life, his family and his career.
Recently, surrounded by members of the Iglesia de Cristo (Church of Christ) that he founded 20 years ago, Lozano drove a shovel into the ground at First Street and Lewis Avenue, the first step in the construction of a new 250-seat church building for the Hispanic congregation.
Several Church of Christ congregations and individuals in the area are helping fund the project, designed to fit in with the art deco architecture of the historic Kendall-Whittier area.
“I think it’s going to be a really neat building,” said architect Taylor King of TriArch of Tulsa, designer of the project. “That area has had a lot of bad karma, but it’s really starting to clean up. There’s a lot of history in that area. This is a wonderful thing for Tulsa.”
Lozano started the church as a Hispanic ministry at Memorial Drive Church of Christ just after completing training at the Sunset International Bible Institute in Lubbock, Texas.
The church later met at the former Greater Tulsa Christian Academy, where it became self-supporting, and moved in 2000 to a small former library building at First Street and Lewis Avenue.
The 10th and Rockford Church of Christ helped the Hispanic congregation buy that building and the large lot it rests upon.
Plans for the new building were launched when the congregation outgrew the 100-seat library building, which it will keep for Bible classes and youth activities.
Bill Coday, an elder at the 10th and Rockford Church of Christ, said his congregation has supported the Hispanic church for many years.
He said the new building is expected to cost about $350,000, of which $250,000 already has been raised.
“There’s a lot of hands involved all over the Tulsa area, and that’s a good thing,” Coday said.
Lozano said his church members have pledged to work on Sheetrock and the interior, finishing it under the supervision of the contractor once the building is enclosed.
He hopes to be in the new building by summer.
He and his family became U.S. citizens on March 21, 1991.
“That was important for me spiritually and socially. I couldn’t be a preacher without obeying the law,” he said.
“When I preach the gospel, I tell people to immediately conform to U.S. immigration laws,” he said. “To become a U.S. citizen takes a long time and money, but they’re working on it.”
Oklahoma’s tough new immigration law has cut the Hispanic population in the state from about 150,000 to about 70,000 or 80,000, he said.
Many have moved back to Mexico or to other states, he said. “Some are afraid they will end up in jail.”
In addition to ministering at Iglesia de Cristo, Lozano is a chaplain for the Tulsa County Sheriff’s Department and a jail and prison minister.
He has helped found Hispanic congregations in three other Oklahoma cities: Tahlequah, Muskogee and Claremore.
REPRINTED WITH PERMISSION FROM THE TULSA WORLD