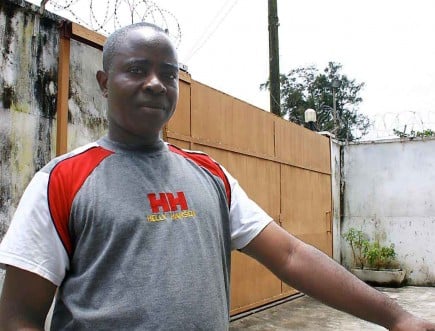 Erik Tryggestad
MONROVIA, Liberia — Like many Liberians, David Kolleh remembers a time when he looked at the dead bodies of his people with a sense of envy.
The 14-year civil war turned this West African capital into “a city where death was better than life,” he said. “Being alive was meaningless, as the order of life in Monrovia was violence and murder.”
Kolleh, 44, ministers for a church of Christ in Gbarnga, the provisional capital of Bong County, about 120 miles north of Monrovia. He endured more than a decade of fear, uncertainty and horror. In his struggle to survive he was separated from his family, arrested multiple times, beaten and threatened with death.
He witnessed starvation, brutal executions — even cannibalism.
Kolleh credits his faith with his survival, but said there were plenty of times when he felt abandoned and angry with God.
At those moments he saw God working through his family, friends and his infant daughter, who saved his life at least once.

Bornin the village of Dorstown, Kollehencountered churches of Christ through a radio program, Search the Scriptures.He was baptized at age 26 by Thomas Clinton of the Gaye Town church in Monrovia.

Heearned a diploma from the French Institute in 1988 and took a teaching job atthe Camp Schiefflin Military Barrack, a stronghold for soldiers ofthen-president Samuel Doe. Doe seized power in a military coup in 1980 and wona presidential election in 1985, though his opponents disputed the results. Bythat time, Doe was a “full-grown dictator,” Kolleh said.

Hewas living in the barrack on Dec. 24, 1989, when the National Patriotic Frontof Liberia (NPFL), led by Charles Taylor, began its campaign against Doe’sforces.

Kollehknew he would be forced to fight if he stayed but feared reprisal if he askedto leave. He didn’t play cards or drink with the officers and was considered“unsociable,” but he conducted Bible studies with many of the soldiers’ wivesand children.

OnMay 8, 1990, a colonel in Doe’s army commended Kolleh for his service andgranted him clearance to leave.

Fourmonths later Doe was captured and killed by a splinter group of the NPFL. Hisbrutal execution was videotaped and circulated widely.

ForKolleh and his wife, Naomi, life in Monroviawas hard. Bodies lined the streets. Food was scarce. The couple eventuallymoved to Gbarnga, in Bong County, controlled by Taylor’s forces.

“Livingamong rebels was a real challenge,” Kolleh said. “They behaved as if they werefrom a different world.”

Fightinglater forced the Kollehs from Gbarnga. They were on the run when Naomi gavebirth to their first child, Winnie. Providing for a wife and daughter seemedimpossible, and Kolleh said he became frustrated with God. Then a friend ledthem to a United Methodist church and cared for their needs.

Theconflict forced the family to move again, and it wasn’t long before they werecaught at a makeshift checkpoint where rebels were recruiting fighters byforce. Kolleh took Winnie from her mother before soldiers separated the couple.

Babyin hand, Kolleh stood before what he called a “death squad.” A “dirty anddesperate fighter” approached him.

“Hetook out a human skull and set it on my head. He warned that if it dropped, Iwould likewise drop.”

Winniestarted crying. Kolleh described it as a terrible, bitter cry that silenced thesoldiers. The recruiting officer ordered him set free to find the baby’smother.

Kolleh’smost gripping story of survival began at 4 a.m. Oct. 30, 1994. He was awakenedat gunpoint by a soldier who wanted him to carry looted items to the town of Ganta. That meantcrossing territory controlled by the Liberia Peace Council (LPC), a hostilesplinter group.

Twentyminutes after passing the bank of the Beh River,gunfire erupted and Kolleh’s protectors fled. He lost consciousness and awokeunder two dead bodies. He heard LPC fighters counting the dead. One said, “Weneed the hearts of two men for this evening’s meal.”

Kollehbegan reciting Psalm 27 in his head: “The Lord is my light and my salvation —whom shall I fear?”

Onefighter searched Kolleh’s pockets and found his New Testament. Another kickedhim in the head, causing him to cry out. The men laughed and used the pages ofhis Bible as rolling papers for opium. They asked him why God hadn’t saved him.

Kollehwas imprisoned at an LPC camp. He watched in terror as the fighters performedthe ritual killing of another prisoner, removing his heart and intestines andboiling his flesh. “I wish the earth had swallowed me up to avoid seeing suchwickedness,” Kolleh said. “They assured me the next day was mine.”

Latera priestess of juju — the Liberian term for sorcery — questioned Kolleh. Hetold her he was a preacher. She hit him and accused him of provoking evilspirits. He stood silently in prayer.

Finally,she told him to leave the camp or be killed. He received no explanation for hisrelease, but “it was clear that my presence was causing serious damage to theiroracles,” he said.

Aftersurviving 14 years of war, any Liberian is qualified to write a book on humansuffering. Kolleh has done just that. “My Journey Through the Valley of Death”is the title of his unpublished manuscript. The work details his family’sstruggles and his efforts to rebuild churches of Christ in Gbarnga.

Kollehpreaches for a congregation of about 105 members. He also hosts a local radioshow, “The Restoration Broadcast,” and has plans for a rural evangelism programand a preaching school in Gbarnga.

Healso works with the church of Christ in Suakoko, atown where he and his family found shelter during the conflict.

FungbehKarmue, who works with the Suakoko church and eight other churches in Bong County,also has harrowing stories of survival during the war.

Karmue’swife, Neyor, lives in Jacksonville, Fla., and plans to reunite with her husband in Liberia soon.She attends the Argyle church, Jacksonville,where one Sunday she met visitors Don and Martha Bryant, members of the QuailSprings church, Oklahoma City.

TheBryants were encouraged by Neyor Karmue’s story and visited Suakoko earlierthis year. They met Kolleh and caught his vision for rural evangelism.

“Mostof the focus for evangelism has been in the city of Monrovia,” Martha Bryant said. “The ruralareas are in need of facilities which will house a place of worship, a schooland a clinic.”

Kollehsaid he was encouraged by the Bryants’ interest in helping the Liberian people,now facing extreme poverty because of the war. The suffering isn’t over.

Reflectingon his own struggles, he realizes that when he questioned God about why he wassuffering “I only found myself becoming a victim.”

“Whenbelievers suffer, they should count it as blessing and remain unmovable,” hesaid, “for our labor is not in vain.”