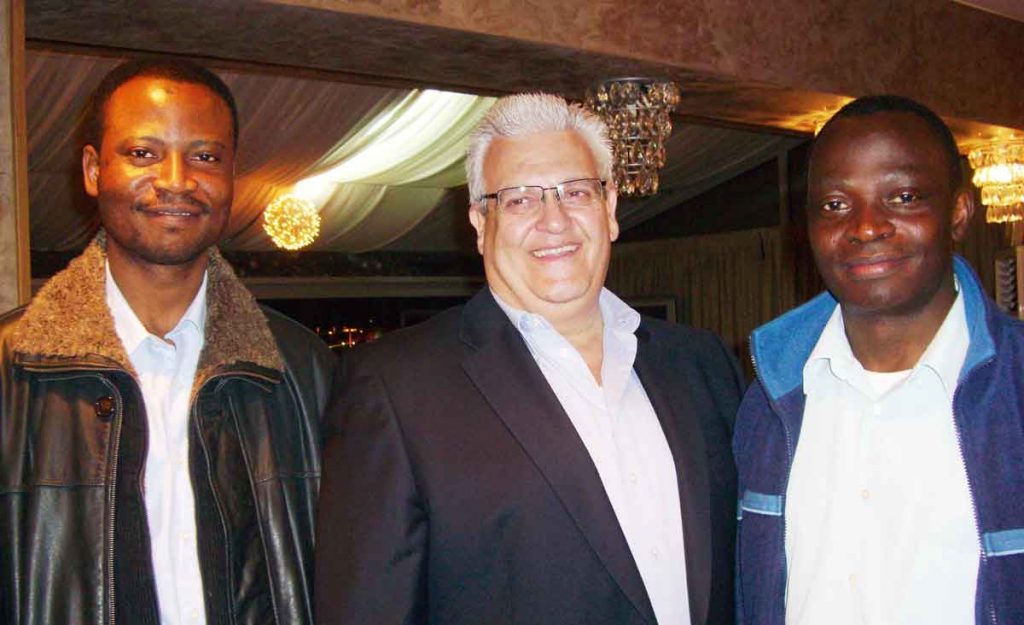 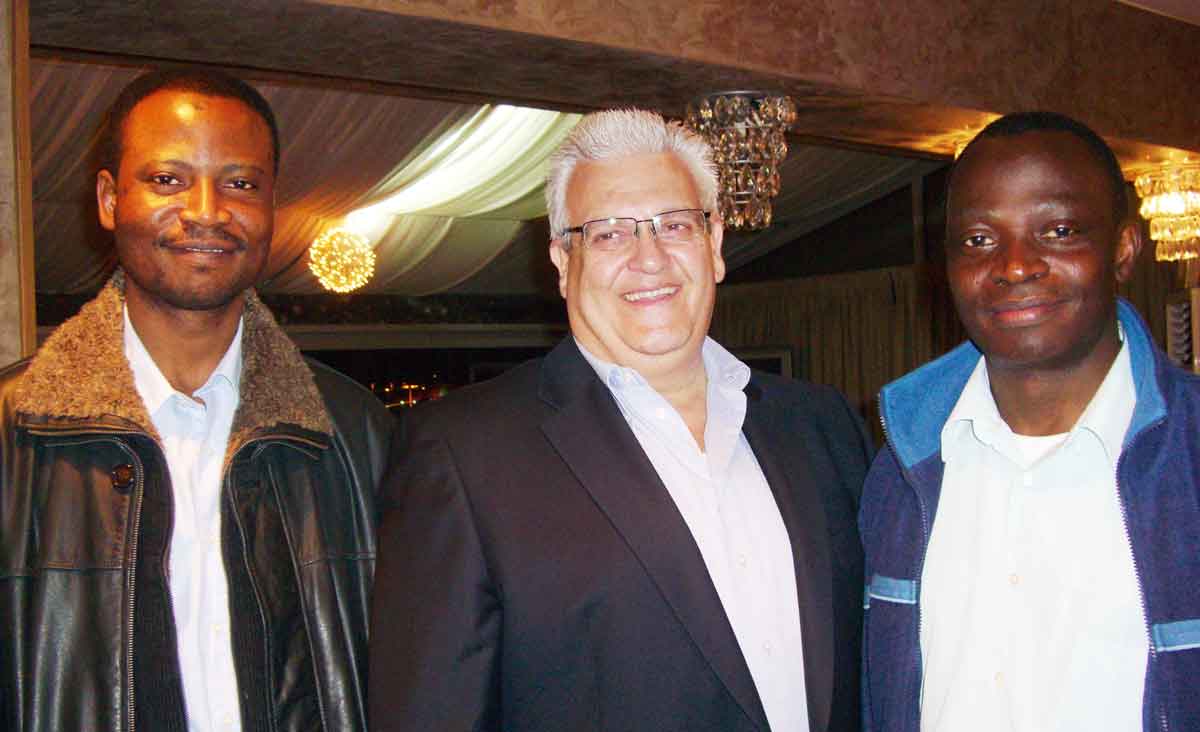 Adebowale Ajagunna, left, stands with Alexander Melirrytos and John Adesoye at a celebration dinner in Heraklion, Greece. The dinner was in honor of Ajagunna’s completion of his doctorate degree. (Photo provided)

A global community of church members — in Africa, Europe and the U.S. — mourns Nigerian minister Adebowale Ajagunna, known as “Debo” by his friends.
Ajagunna, who worked with a Church of Christ in Greece, was shot to death May 1 in Ikare-Akoko, Nigeria. Robbery is the apparent motive.
The Nigerian native served a church in Heraklion, the largest city on the Greek island of Crete. The church is composed of expatriate converts, many of them from Nigeria. (See our 2007 story detailing the conversion of the church’s lead evangelist, John Adesoye, and a 2008 news brief about the congregation.)
Ajagunna, who moved to Greece in search of employment and earned a doctorate there, returned to Nigeria last year to be with his wife and three children. He was praying with members of his former congregation in Ikare-Akoko, a city in the southwestern Nigerian state of Ondo, when armed robbers entered the church building.
“Everyone ran for their life,” said Eleni Melirrytos, a member of the Omonia Church of Christ in Athens, Greece, and longtime friend of Ajagunna. “There was a pregnant lady who got shot and was asking for help. Debo had already left the room but came back to … help her. That is when he got shot.”
Ajagunna died from his injuries. The pregnant woman (and her unborn child) survived the attack, Melirrytos said.
Melirrytos and her husband, Alexander, make regular visits to the church in Crete and work with the Nigerian Christians there. Eleni Melirrytos provided some additional details about Ajagunna:

Debo was a faithful and joyful Christian man.
Debo came from Nigeria a few years ago searching for work and to further his education. We met him five years ago. Debo worked side-by-side with John Adesoye for the newly-established congregation in Heraklion, Crete. Both Alexander and I visited often and encouraged the church. Debo would always reconfirm his appreciation for the time and love it took for us to travel to the island and minister to the congregation. He was a very joyful and kind person.
Tom and Cheryl Black, mission workers to Sophia, Bulgaria, have joined us and visited often the congregation — and encouraged them in many ways. In March 2010, along with the Blacks and the brothers and sisters of the Crete congregation, we organized a celebratory dinner to share the joy and success of Debo’s graduation with his doctorate degree.
Each time we called him “doctor” he would put his head down and say, “Praise God.”

Eleni Melirrytos is collecting funds for Ajagunna’s wife and children. Send her a message through her website, “Cook with Eleni,” for more information.