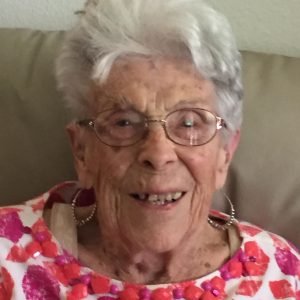 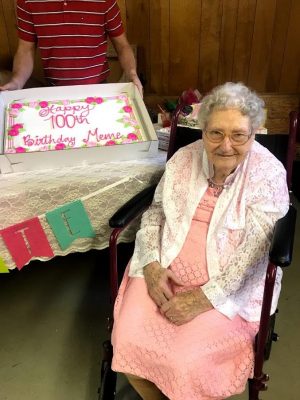 Adath Hudson was born in the lovely and rural Ozark mountain community of Mt. Judea, Ark., on June 2, 1919, and she has lived there all her life. She was baptized in July 1933 at the end of a revival meeting and has worshiped with the Mt. Judea Church of Christ for 100 years. This congregation was established in 1870 by her great-grandfather, and her father was an elder in the congregation for many years.

She celebrated her birthday by attending worship at the Mt. Judea Church of Christ followed by a potluck meal and reception. Among the nearly 200 visitors she received that day were her two sons, five grandchildren, eight great-grandchildren, her 96-year-old sister, as well as many of her nieces and nephews.

Adath has been a homemaker and farmer most of her life and a wonderful example of a faithful Christian. Her tip for longevity is eating pinto beans and cornbread every day. Happy Birthday, Adath!

Virginia Rae Jenkins Niles was born July 29, 1926, and passed peacefully with beauty and grace into the arms of Jesus on June 9, 2019. She was born on the family farm in Beaver County, Okla., and had five brothers and sisters. In 1946 she married Harold Dean Niles, her high school sweetheart, and they were married 72½ years. Together they had four children, eleven grandchildren, and twenty-six great-grandchildren.

Virginia worked for Oklahoma Christian College as secretary to the dean of students until her retirement in 1992. She was also the sponsor for Women of Gamma Rho social service club and continued that role for many years after retirement. Virginia had a passion for mission work in Sibiu, Romania, and she taught youngsters and ladies about Jesus. She cared for and served her family, friends, and others with a special spirit. 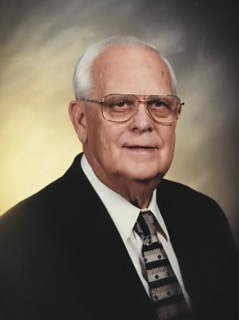 Dempsey Simpson, 90, passed into eternal glory with his Lord and Savior on Monday, July 15, at his home in Fair Oaks Ranch, Texas, with his loving wife and family at his bedside. Dempsey lived a life of love and service to God and others, particularly to vulnerable mothers and children.

Dempsey was born on March 23, 1929, near Sulphur Springs, Texas. He earned his bachelor of science from Sam Houston State College and a master’s degree in education from East Texas State Teachers College.

He began his teaching career in vocational agriculture at Boles Home High School in 1949. He married the love of his life, Jean Davies of Quinlan, Texas, on June 2, 1951. They celebrated 68 years of marriage this year. Dempsey taught at Boles for 15 years, managed their agriculture program, preached on Sunday, and with Jean served 8 years as house parents for teenage girls. During this time, they were blessed with four children: Robbie, Diana, Pamela and Randy.

Dempsey’s hard work, dedication and energy led to his selection as the superintendent of Medina Children’s Home beginning in March, 1964. Under his careful and diligent leadership and hard work, bills were paid, and MCH began growing rapidly. He had a desire to make it possible for families to stay together and was instrumental in adding more group care cottages and a planned program for single parents with children. During his time he also served as an elder at the College Avenue Church of Christ.

When Dempsey retired from MCH in 1984, he left a strong organization that was blessed with a solid financial foundation for the future. In 1992 he was named Administrator of the Year by 85 Christian Child Care agencies at their yearly conference. He moved to Abilene, Texas, and continued to serve as executive director of development and public relations, faithfully continuing to tell the story of Medina Children’s Home to individuals and churches for five years. He was a member of the University Church of Christ for 30 years. As his health declined, he and Jean moved to Fair Oaks Ranch to be near their children. All of his career he exemplified James 1:27: “Religion that God our Father accepts as pure and faultless is this: to look after orphans and widows in their distress….”

The Christian Chronicle appreciates and acknowledges generous gifts received in honor of the Lynn and Joy McMillon Endowment fund and in memory of Marge McGinley and Jim Vercelli.