Thank you for praying specifically for the Lord to meet the Perrins’ health and financial needs. The journey of patient endurance continues! As has been shared previously, after much prayer and six major surgeries, Bryan has come from Kentucky to Minnesota to await a heart transplant at a Mayo Clinic hospital. Because of Bryan’s rare blood type, it could still be months before he receives a match.

The family has been in major transition this entire year. In August Bryan was moved to the “Gift of Life Transplant House,” which happens to be across the street from the Rochester Church of Christ and just a few blocks from Mayo.  Someone needs to be with Bryan 24/7, with a family member staying with him at night. The family has moved in with the local preacher, Steve Sikes and his wife Patti.

On Sundays when he has enough energy, Bryan Perrin worships with his family.

The Perrin family is so thankful for the outpouring of cards and support they have received on this journey. Your prayers are certainly making a difference and his doctors are saying they are amazed he is not in cardiac ICU by now. Their financial needs continue. Bryan’s medical journey has left them with only the money from his minimal social security disability check and your support.

The Rochester Church of Christ is asking you and your church family to continue to pray for the Perrins, encourage them with cards, and help them financially. If you need your check to be tax deductible, please write it to the Rochester Church of Christ with a note indicating that your gift is for the Perrins. Otherwise, you may write your check straight to the “Perrin Family Benefit Fund.” Thank you!

You can keep up with the Perrins’ ongoing updates of their journey here.

Ray D. Fullerton Jr., 97, passed from this life on Aug. 26, at home in Jarrell, Texas, surrounded by his wife and family.

Ray was born on Jan. 31, 1921, in Tyler, Texas, to R.D. Fullerton Sr. and Ruth Wiggins Fullerton. He was the oldest of four children and grew up in Kingsville, Texas.

After graduating from high school, Ray attended Texas A&M and the University of Texas where he earned a bachelor’s degree in 1942. Afterward, he enlisted in the U.S. Army and completed officer candidate school. He and Mary Margaret Baucom were married on Aug. 31, 1943, in Corpus Christi. Shortly thereafter, he was sent overseas. Six weeks after D-Day, he and his unit, the 50th General Hospital, entered France. He served as the hospital’s personnel officer until World War II ended.

After the war, Ray and the family moved to Abilene where he became an instructor in the business department at Abilene Christian College and supervised two boys’ dorms while taking post-graduate classes. In 1950, he returned to the University of Texas where he earned a master’s in business administration.

Upon returning to the United States in 1972 Ray and Mary Margaret settled in Vails Gate, N.Y., where Ray preached until they returned to Texas in late 1976. They settled in Georgetown and continued their ministry with Ray preaching in Troy, Leander and the Briggs and Strickland Grove communities. After retiring from the ministry they joined the Georgetown Church of Christ where Ray was active in mission work for many years.

On July 3, 2002, Mary Margaret, his wife of 59 years, died. Through mutual friends he met Ronda Huntsberger at the Georgetown Church of Christ. They were married on March 11, 2006. Ray’s children extend their love and thanks to Ronda for the love, joy and care she brought to Ray during their 12-year marriage. 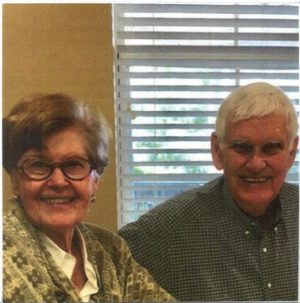