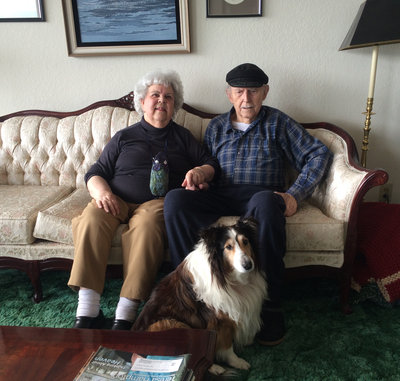 Harold and Marcilee JonesOnce upon a time in the little village called Los Angeles in the state of California, there was a boy named Harold Jones and a girl named Marcilee Hanna.

Now, on a certain Sunday these two people just happened to attend an open house at Pepperdine College before it was called a university, Harold was an alumnus, and Marcy as a future student.

Harold was on leave from the Merchant Marine, and Marcy was with a Christian young people’s group from Alhambra, Calif. After a meeting of singing and worship in the chapel, Harold and Marcy saw each other for the first time. This meeting was set-up by Harold’s sister-in-law and was called a blind date. Did Harold and Marcy both like what they saw? Oh, yes!

After that, Harold and Marcy were together as much as possible, but Marcy had to finish high school. In a little while the two decided they were meant for each other and had a beautiful fairy tale, storybook wedding at the Southwest Church of Christ in the village of Los Angeles.

Somehow the idea of attending Pepperdine faded away, for now Harold heard of a place called Alaska. It sounded great. For there he could have the sea that he had grown to love and also have a family.

So they boarded a Greyhound bus in Los Angeles, and, after an uneventful land and sea trip, landed in a town called Juneau. There, during the many ups and downs of mostly financial difficulties, they had three beautiful children: Anita Rae, Christopher Lee and Anthony Lynn. During their long marriage, they also had six Shetland sheepdogs and four cats whose origins were known as the alley.

Harold decided to go into the fishing business in Juneau. So with Marcy’s complete faith and help, they bought a boat named Tacora and fished out of Pelican, Alaska, for approximately 20 years.

Then they heard of shrimp fishing in Kodiak, but their boat was too small for such an adventure. So they purchased the fishing vessel Tradewind. As time progressed, they sold the Tradewind and wound up with the fishing vessels Marcy J and Anita J. Soon they decided two boats were one too many, so they sold the Anita J and concentrated on improving the Marcy J. The Marcy J did a great job for them for 20 or so years, but it was finally time to sell the boat and retire.

They traveled some – Germany, France, and Holland – and sailed from Alabama through the Panama Canal back to Kodiak. That was quite a trip! An engine failure had them on a towline behind the fishing vessels, John and Olaf, in San Diego.

At one time Harold joined with nine other fishermen and formed a company called All Alaskan. This was a successful venture, and during that period he owned the Star of Alaska as All Alaskan Seafood’s, as well as processing vessels with the same name.

Now with Harold in his 92nd year and Marcy in her 87th year, they look forward to their 70th wedding anniversary on Sept. 20, 2016. It has been a long, sometimes financially difficult, 70 years. Have they ever yelled at each other, then kissed and made up? You bet! If they had it to do over again, would they do it the same way? Oh, yes! 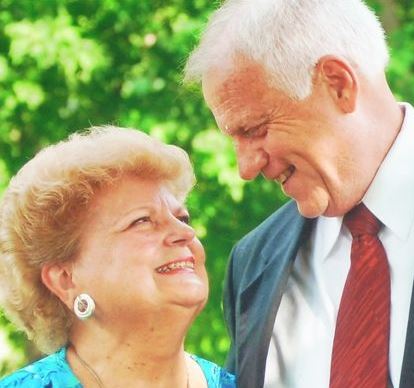 They were married at the Wilshire Church of Christ in Oklahoma City on Dec. 29, 1966. Both graduated Oklahoma Christian University, Wendell with a B.A. in Biblical Studies and Rochelle, a B.A. in Education and Language Arts. Rochelle received her Master’s Degree in Reading Specialist Certification from Illinois State University in 1989.

While living in Texas, Rochelle was involved in speaking, lobbying and debating on the floor of the Texas Legislature for Christian women’s rights and in opposition to the controversial Equal Rights Amendment Bill.

She has been involved in many levels and aspects of education, including writing Christian curriculum for pre-schools, teens and women, and teaching in private pre-schools and at the elementary and university public school levels. She taught at Illinois State University (ISU) for 22 years (including an ISU/Loyola University partnership program) and served as adjunct professor at Eureka College.

She continues to direct and teach Thursday School, a pre-school provided by the Cooksville Church of Christ and serves as president of the Towanda District Library Board of Directors.

Wendell was employed by State Farm for 34 years and has served various roles in Kansas, Oklahoma, Texas and Illinois churches. He currently preaches for the Cooksville Church of Christ and does volunteer work through the chaplain’s office at Pontiac Correctional Center.

Both Wendell and Rochelle have extended their passion to serve beyond the borders of their state and country through both foreign and domestic mission trips.

They have been blessed with three children, Alicia, Anissa and Brandon, as well as nine grandchildren.
Memorials
Imogene Fanning Baker
1919 – 2016

Imogene Fanning Baker passed from her earthly life on Aug. 3, 2016, in Bloomsburg, Pa., at age 97. Born June 10, 1919, Imogene was the third child
of Inez Palestine Horton and Henry Brooks Fanning.

She was preceded in death by her husband of 52 years, Harold Leon Baker, her parents, one brother, and two sisters. She is survived by one son, Jerry Van McGlawn Baker (wife Becky), of Madison Heights, Va.; two daughters, Priscilla McGlawn Baker Hobby of Paragould, Ark., and Esther Lenore Baker Fatula (husband Kenneth) of Berwick, Pa.; 10 grandchildren and 20 great-grandchildren.

Imogene was raised outside of Cullman, Ala., on her parents’ 60-acre farm. She was characterized by having a zest for life, an impish sense of humor and an unconquerable attitude, which she displayed for the rest of her life. From a modest life of caring for livestock and picking cotton but possessing a thirst for knowledge, she graduated from high school at age 16 and, with a $100 loan from her grandmother, set off to Nashville, Tenn., where she enrolled in and attended David Lipscomb College. After graduation she taught fifth and sixth grade in Alabama, and Dasher Bible School in Valdosta, Ga., where she met Leon Baker, who was on leave from the U.S. Navy visiting her sister. Imogene and Leon married on Sept. 12, 1946. After Leon obtained a position with the National Security Agency, they moved to Washington, D.C., and Imogene gained employment with the General Accounting Office.

In 1947, after the tragic death of Imogene’s younger sister and her husband, their children, Priscilla and Jerry, were immediately adopted by Imogene and Leon. They settled their new family in Arlington, Va.; Imogene became a full-time homemaker and in 1949 gave birth to a daughter, Leonore. Initially, the family attended the Alexandria Church of Christ and later worshipped with the Falls Church of Christ. Imogene had a passion for studying, writing and teaching. While fellowshipping at Falls Church, Imogene taught Bible classes to numerous women and teenage girls. A wider audience was reached by her “Christian Woman” radio broadcast funded by Falls Church and through articles published in “Power for Today,” “Christian Woman,” and “Teenage Christian.” She and Leon always reached out to those needing help, and Imogene made gallons of soup for the sick and recovering and provided comfort and counseling to anyone in distress. As an “older woman” faced with the difficulties of aging, she and Leon were faithful servants of the Lord at Seven Hills Church of Christ in Lynchburg, Va., where she was loved, honored, and ministered to as she had done for so many. Her life was devoted to Christ and family.

The family wishes to thank all those who have lovingly cared for and remembered Imogene even when she could not remember you. In lieu of flowers, please consider a gift to World Christian Broadcasting, www.worldchristian.org/ or The Christian Chronicle, www.christianchronicle.org in her memory.

Raymond GriffinRaymond LaVal Griffin began his life’s journey on Jan. 20, 1933, in Houston, Texas. He was the only child of Bethel and Raymond Griffin.

His family moved to San Francisco, Calif., in 1942, but soon relocated to Los Angeles. Their church home was at 40th Street and Compton Avenue, currently the Figueroa Church of Christ, where Raymond later served as a beloved elder.

Raymond attended Los Angeles public schools and graduated from David Starr Jordan High School in 1951. He excelled in many activities and sports. He received an Associate of Arts degree from Compton College and earned a Bachelor and Master of Arts degrees from Pepperdine University.

In 1953, Raymond met his future wife, Maybelline Rossum, and they were married in 1956.

Raymond and Maybelline became the parents of two daughters, Rayvalline Lachance and Bethel Melody. In 1999, Melody’s only child, Amber, died of cancer at age 17. Rayva died of pancreatic cancer in 2015.

Raymond began his profesional career at Lockheed Aircraft in Burbank as a machinist. Soon he was drafted into the U.S. Navy. He served on the USS Bon Homme Richard Aircraft Carrier, stationed in Alameda, Calif., and toured Japan for eight months. After serving active duty, Raymond continued in the Navy Reserve.

Because of a layoff at Lockheed, Raymond began working for the Los Angeles School District and continued his education. He later became employed as one of the first City of Los Angeles Traffic Control Officers, which led him to a career in law enforcement.

In July 1968, he graduated from the Los Angeles Police Academy and was assigned to the Newton Street Division. He served as one of the first Community Liaison Relations officers.

In 1974, he trained and received the Certificate for Appointment as a Federal Drug Enforcement Agent. He also received a certificate in training from the U.S. Criminal Justice Training Federal Bureau of Investigation (FBI). Raymond retired from the Redondo Beach Police Department as a juvenile officer, a member of the elite SWAT team, and an instructor of the DARE program in Redondo Beach Unified School District. 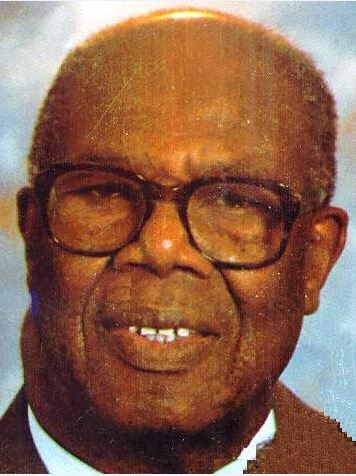