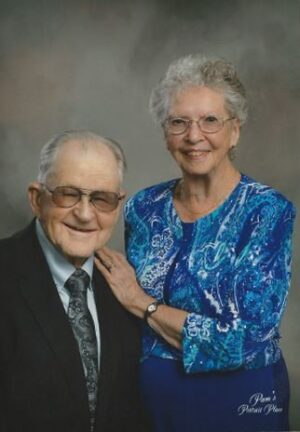 Howard and Dorothy (Sarchet) King are celebrating their 75th wedding anniversary. They were married May 12, 1946, in Agra, Kan., after Howard had completed his service with the Navy during World War II.

Howard attended Fort Hays State College and began teaching industrial arts in Dighton, Kan., and later moved to Scott City, Kan., where he taught for more than 25 years. He retired from teaching and purchased King’s Aluminum and Glass, which they owned for 10 years. He was also a rural mail route deliverer. He loves to do woodworking, and has continued making segmented bowls as his hobby.

Dorothy was a busy mother, volunteering for leadership roles in Cub Scouts, Girl Scouts, Welcome Wagon, Pink Lady and teaching Bible classes. She was also a seamstress extraordinaire. She made all the clothes for her family and also costumes for many high school musicals.

They have seven children: Ken, Jim, Ron, Carmen, Karen, Carla and Jeff.  They also have 12 grandchildren and 12 great-grandchildren.

They have been members of the Church of Christ in Scott City for 70 years, where Howard served as an elder. They are a wonderful example of a loving, Christian couple. 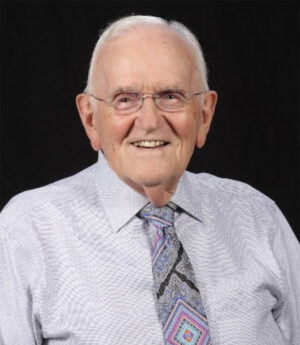 Kenneth Joines was born Dec. 27, 1935, near Belton, Ky., to Guy and Truly McElwain Joines. He grew up there, graduating from Hughes-Kirkpatrick High School.

In his senior year, he met Janrose Forgy, and they married the following December while he was a student at David Lipscomb College. It was during the following year, while still 18 years of age, that he answered the call to become the full-time preacher for the church at Butte, Mont.

He preached for Goodman Oaks for 29 years. During his ministry, Goodman Oaks grew to become the largest congregation of Churches of Christ in Mississippi. Following retirement in 2004, he remained at Goodman Oaks while doing interim work for the Woodland Hills Church of Christ in Memphis, twice in Sebring, Fla., and twice in Lake Placid, Fla., as well as preaching by appointment in states from Florida to Alaska and from Texas to West Virginia.

An avid big-game hunter, he enjoyed numerous trips to Colorado and Wyoming where he took bull elk and antelope as well as numerous mule deer. He was commissioned a Kentucky Colonel by Governor Louie Nunn and served two terms as president of the Whitehaven Civitan Club. For several years he served the Shelby County Juvenile Court as Auxiliary Probation Officer, working with numerous young men in rehabilitation.

In 2012, his first wife, Jan, died of pulmonary fibrosis. Two years later he married Sue Noto, a member at Goodman Oaks. Many times he observed, “It is almost unbelievable that God gave me two of the very best women to walk and work beside me. I am blessed and have never been happier.” Ken died April 2, 2021.

Ken was preceded in death by his parents and by his older brother Virgil, sister Marjorie Rhoads, and son-in-law Robin Enochs.

He is survived by his wife of six years, Sue; son Mike of Seattle; daughters Laura of Denver, Pam (Steve) Peraza of Abilene, Texas, and Jennifer Enochs of Tupelo, Miss.; as well as stepsons Joseph (Bethany) Noto of Bono, Ark., and Matthew (Christina) Noto of Olive Branch Miss. He is also survived by his sister Shirley (Eugene) McPherson of Greenville, Ky., and  brother Jimmy (Mary) of Snellville, Ga., as well as four granddaughters, one grandson and two great-grandchildren. 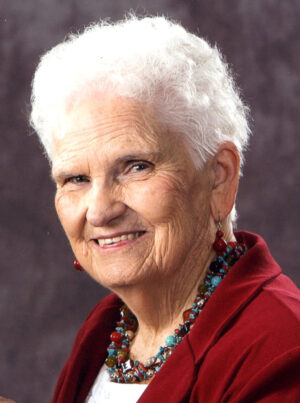 The couple began planting churches in the Northeast, including Levittown, Penn., Salisbury, Md., and Collinsville, Ill. They then spent 20 years as missionaries in Cameroon, West Africa. They later worked in Belize.

The couple also lived in Onalaska, Texas, until they retired to Wichita Falls. Throughout Barbara’s life, her genuine love for literally everyone she met endeared her to many and led her on countless unscripted adventures!

Barbara was preceded in death by her parents and her sister Lee Myers.

Barbara is survived by her husband of 67 years, Windle; her two sons Carl Kee and wife Pat of Lubbock, Texas, and Paul Kee and wife Janet of Cameroon; her daughter Alicejoy Taylor and Joe of Wichita Falls; a brother Bud McFarland and Sarah, of Edmond, Okla.; five grandchildren, six great-grandchildren, as well as many beloved nieces and nephews; and a large spiritual family around the world.

Memorials in Barbara’s name may be made to the Cameroon Mission Fund through the Faith Village Church of Christ, 4100 McNiel Ave, Wichita Falls, TX 76308. 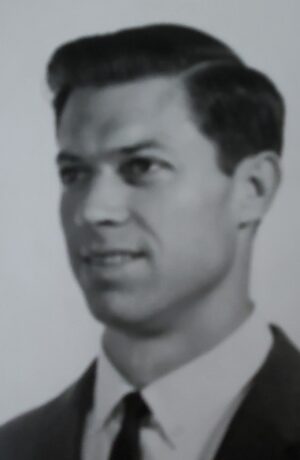 Ken was born Sept. 3, 1936, in Comanche, Okla., in a two-room shack. He was named after two of his mother’s favorite singing cowboys: Kenneth Maynard and Gene Autry. Ken grew up dirt poor but became a self-made man, accomplished in education, church ministry, athletics, and music.

Ken graduated from Addington High School in Oklahoma and earned bachelor’s degrees in physical education and Bible from Harding College in Searcy, Ark. He earned his M.Ed. and Ed.D. in health and physical education from Temple University in Philadelphia.

While at Harding, he met the love of his life, Lucia DuBois, while working in Patti Cobb Cafeteria. Before either one completed school, they married at the College Church of Christ in Searcy on May 26, 1957.

He is survived by his children

Family and friends gathered Saturday, May 1, for a memorial service at Memphis Funeral Home and Memorial Gardens where they paid tribute to an amazing father, husband, brother, uncle, and Christian man. You may read his full obituary on their website.

Showcase the lives of your loved ones — birth and wedding announcements anniversaries, memorials, honors for longtime ministers and workers and more.