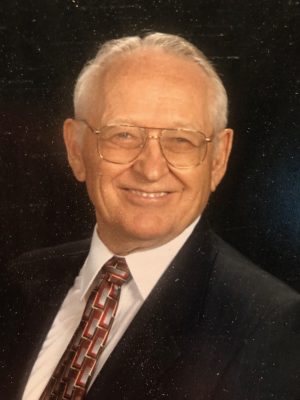 Ermal Eugene “Gene” Catterton, age 92, passed away May 4, 2020, in Fort Myers, Fla., with his wife, Barbara, by his side. He was born on Sept. 8, 1927, in Indiana to Ermal Dale Catterton and Robbie (Smith) Catterton. The family soon moved to Arkansas where his parents were schoolteachers and farmers. He served in the Navy at the very end of WWII in the Philippines. He married his high school sweetheart, Fayrene Imboden in 1947.

He was invited to participate in a post-graduate summer program at Stanford University in 1962, and he directed the writing of two high school math books in the late 1960s. Gene taught math and science for thirteen years in Weiner, Hickory Ridge, and Wynne, all in Arkansas. Then he moved into administration for his remaining years, retiring in 1987.

Gene and Fayrene lived in Wynne, Ark. for 42 years, where he was active with the Kiwanis Club; he chaired the Red Cross blood drive for seventeen years, and Fayrene volunteered; Gene was Wynne’s Distinguished Citizen in 1984. He lived in Gainesville, Fla. from 2002-2008, then in Mayfield, Ky., until his death.

His deepest love was for God. He ministered as an elder at the Wynne Church of Christ for nearly three decades and for four years at the University City Church of Christ in Gainesville, Fla. Gene and Fayrene loved to travel, and in their retirement years they visited 49 states and several foreign countries, mostly during their years with Sojourners, a Christian service organization. After 58 years of marriage, Fayrene died in 2005. In 2008, Gene married Barbara Holland and continued his love for travel and serving God as he and Barbara also participated in Sojourners.

A memorial service will be held at the Wynne Church of Christ in Wynne, Arkansas, when it is deemed safe to do so. Memorials may be directed to: Paragould Children’s Home, 5515 Walcott Road, Paragould, AR 72450, or to Sojourners at https://sojourning.org/. 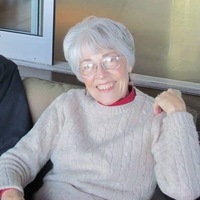 Vera Jeanne Petty Carrizal of Round Rock, Texas, passed from this life on Wed., June 10, 2020, at the age of 79. She was preceded in death by her parents Gene and Mabel Petty; her brother, Jim Petty; and her grandson, Thomas Wiginton. She is survived by her husband Steve Carrizal; brother and sister-in-law Charles and Olaine Petty, sister and brother-in-law Janice and Glenn Wall, sister Kathleen Judd, and sister-in-law Kay Petty (wife of Jim Petty); son and daughter-in-law Steven and Debbi Carrizal and daughter and son-in-law Janice and Chris Wiginton; grandchildren David (Lauren) Carrizal, Rebecca Carrizal, Kaylee Wiginton, Tyler Wiginton, Anna Carrizal, and Alison Wiginton; and many Carrizal and Petty nieces and nephews as well as countless other family and friends.

Born on April 11, 1941, in Marshall, Texas, to Gene and Mabel Petty, Vera Jeanne was the second of five children and the oldest of three daughters. Because of her dad’s work, her family lived in a variety of places including East Texas, Indiana, Maryland, Oklahoma, Texas Panhandle, Kansas, and Germany, finally settling in the Denver suburb of Westminster where she graduated from high school in 1959. From there, she went to Abilene Christian College, graduating in 1963 with an education degree.  After graduation, she was part of the group known as Exodus Bayshore that moved to Long Island, New York, to plant a new church.

After two years, Vera Jeanne got engaged to Steve Carrizal, who was attending the Sunset School of Preaching in Lubbock, Texas.  They married in Thornton, Colorado, on August 14, 1965.

Their life of ministry together took them in Texas to Littlefield, Houston, Corpus Christi, and then finally to Round Rock where they settled into the couple so many at Round Rock Church of Christ will remember — Steve and Vera Jeanne. In each city, along with supporting Steve’s ministry, she had her own career of a variety of professions: teacher at multiple schools (New York, Littlefield, Corpus Christi, and Round Rock), draftsman at Naismith Engineering (Corpus Christi) and Steger Bizzell Engineering (Georgetown), and seamstress (wherever she lived).

The most recent version of their life of ministry together has been working with two senior living communities in Round Rock. In each of these places their love for new people abounded. While Steve was pastoring through visits and leading worship services, many will say that Vera Jeanne impacted the most people as she used her sewing skills to provide a ministry of her own.

For the better part of the past decade, Vera Jeanne battled through myelodysplastic syndrome maintaining a hopeful perspective on life. She made new friends over the years at Texas Oncology and inspired all of us with her determination and energy. She lived a beautiful life, shaped by the transforming love and amazing grace of God. 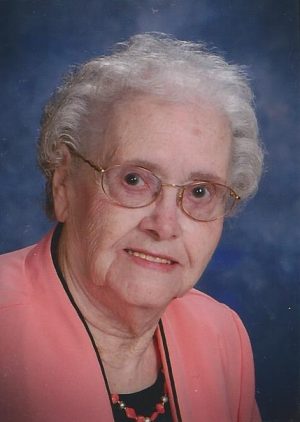 Raised in a Tennessee Christian family, she was baptized when almost 15 and was soon teaching Bible classes. She said of her late husband of 54 years, E.R. Bruce, “I didn’t marry a preacher but after moving to Michigan, where congregations were small, few and far between, so were preachers, so he was encouraged to speak and he became a preacher. I became a PW and raised a family of PKs.”

For 54 years she taught Bible correspondence courses to thousands of students worldwide. Still an active member of Exchange Street Church of Christ, she helped begin their Meals on Wheels, and from age 75 to 90 was a World Bible School ministry leader. At 92, she began a benevolent sewing club in her home and at 95 she began a weekly ladies’ Bible study in her home, both of which continue at the church building. 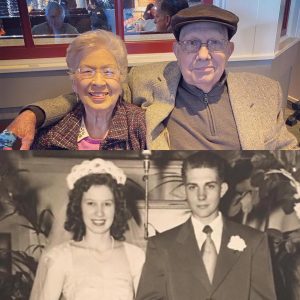 Floyd and Juanita Davis of Shawnee, Okla., celebrated 70 years of marriage on June 25, 2020. Floyd was a deacon and regular song leader for the East Main congregation in Shawnee, led singing for gospel meetings in the area, and conducted congregational singing classes for many years. Juanita was a faithful teacher of God’s word in Sunday school, VBS and personal Bible studies.

Their children are Steve Davis (deceased), La Nita Lough and Melody Winn. They have seven grandchildren and ten great-grandchildren.

Floyd and Juanita worship with the Highland Church of Christ in Tecumseh, Okla.

The Christian Chronicle appreciates and acknowledges generous gifts received in honor of Dale “Chip” and Connie Bettes and Lynn McMillon and in memory of Johnnie Sanchez.