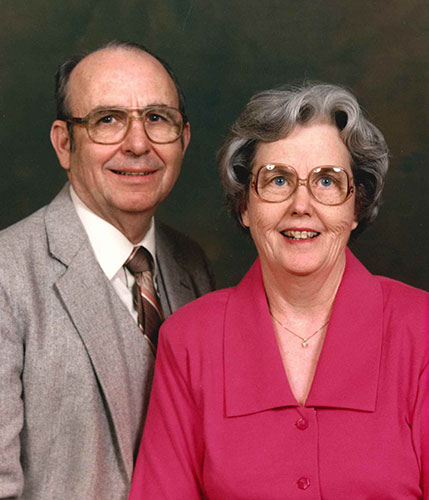 Submitted
Clarence Obert Henderson, 88, died on Sept. 1, 2014, the anniversary of his 62-year marriage to Juanita McGuire Henderson, who passed away May 6, 2013. His death followed a heart attack at his home in Hood River, Ore. Preaching and teaching college business were his chosen occupations, based on a desire to serve.

He preached for churches in Marfa, Texas; East St. Louis, Ill.; Walnut Ridge, Ark.; Pullman, Wash.; and Loveland, Colo. As a professor of business, he taught at Colorado State University, Washington State University, Harding University, and Columbia Christian/Cascade College. While at Harding in the 1970s, he began the “Campaigns Northwest” program which brought college students to churches for summer mission work.
Born in Willow, Okla., on Nov. 14, 1925, he was the youngest child of Clarence Andrew and Birdie Lola Rogers Henderson. His parents and siblings — Odell, Odessa, and Orman — preceded him in death.
After graduating from high school in Salem, Ore., he was drafted in World War II. He held the rank of Army tech sergeant and served as a medic in the Philippines. A 1950 graduate of Harding College, he later earned his master’s degree in business at Washington State University and his Ph.D. from the University of Oregon.
Henderson’s favorite hobby was raising a large vegetable garden and sharing the produce with others, but spare time was also filled with Bible study, teaching, reading, cabinet building, woodworking and fishing. Together with Juanita, he delivered Meals-on-Wheels for 22 years. Teaching classes at church, being an elder and mowing the church lawn were a few of his volunteer jobs.
Having the family around his table was his only wish for birthdays and holidays. He is survived by his children Cam Henderson (Andrea) of Beaverton, Ore., Brent Henderson (Cathy) of Hood River, Ore., Karen James (Ken) of Wasilla, Alaska, Vern Henderson of Redmond, Ore., his nine grandchildren and two great-grandchildren.
Memorials may be made to Healing Hands International or Smile Train.