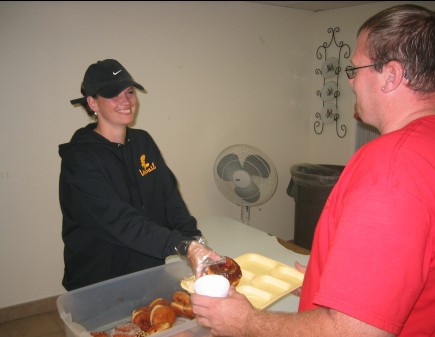 Joy McMillon
For Kathy Weiss, working with the Wednesday soup kitchen at her home congregation is more than a service project.
It’s her passion.
Weiss, a mother of four and a part-time U.S. postal carrier, has been in charge of serving free meals at the church in Lapeer, Mich., for the past four years.  She plans menus, purchases the food, cooks and serves.  More importantly, though, she cares deeply about the people who come to the kitchen.
So much so that she can’t imagine ever wanting to quit.
“It would leave too big an empty place in my life,” said Weiss, who oversees the eight-year-old Soup Kitchen project. “Once you see how much it’s needed and appreciated, you’re hooked.”
The Lapeer church, now comprised of 220 members, began on the campus of Michigan ChristianYouth Camp in Attica, Mich., and celebrated its 50th anniversary lastmonth.
It is part of a group of five churches that offer soup kitchens on the other week days: Trinity United Methodist, Grace Episcopal, St. Paul Lutheran and First Presbyterian churches. They purchase food from the Food Bank of Michigan for the project.
The need for food in the area has increased due to the downturn in the economy, according to Sue Brady, director of Love in the Name of Christ, a clearinghouse for Lapeer County churches.
“We have families who go to a different soup kitchen each night, and it’s going to increase more because the dollar isn’t going as far,” Brady told the Lapeer County Press.
On average, officials estimate five churches serve more than 300 meals a week and over 1,000 a month in Lapeer County, according to Ann Pfeifle, chairperson  of the Lapeer Inner Faith Community.
At the Church of Christ, Weiss estimates that they serve anywhere from 20 to 60 each Wednesday night.  Early in the month, when people get their Social Security checks and their food stamps, the numbers are lower, but as the month continues, the numbers increase.
The types of people coming for help also are changing, according to Jerry Brackney, an elder and family life minister.
“We have had core people who are out of work and on assistance for a long time, including senior citizens on a fixed income,” he said. “Their numbers are increasing, but now we are having whole families coming in where both parents have lost their jobs.”
The soup kitchen requires about 10 volunteers weekly. In addition to four adults who rotate as head cooks, the church’s youth are a vital part of keeping the soup kitchen running. One Wednesday per month the teens help with food preparation and serving, another Wednesday night the pre-teens serve the meal and clean up afterward.
“Teens began the  program,” Brackney said.
Eight years ago, after visiting a soup kitchen at an inner-city ministry in Texas, they came home from their annual mission trip and wanted to start a soup kitchen at their church.
“This work isn’t as simple as serving a meal,” said Weiss, who does most of her cooking at home. “There’s so much more if you will just dig a little deeper. Many of their lives are filled with multiple problems and (they) appreciate a listener.
“People spill their hearts out to us,” Weiss said, adding that all volunteers try to get to know the soup kitcheners as individuals and help them in every way possible.
“We celebrate their birthdays with them, and we pray with them,” said Brackney. They also invite them to Bible class on Wednesday evenings, and several have visited. One has been baptized and is a part of the church.
“We’re not just a soup kitchen,” said Weiss.  “We want to share Jesus with them, too.”
Soup kitcheners are sent home with a sack lunch on Wednesday nights. On Thursdays, they can pick up a box of food and a winter coat, donated by church members.
“You just feel so great to be able to provide these little thing for them,” said Weiss, who heads up the church’s benevolent program.
The Weiss family participates in the soup kitchen as a team, viewing it as an opportunity to serve their community. Her children help cook and serve, and her husband, Ron, a policeman, uses part of his day off to sit down and talk with the guests.
Their service has impacted Weiss’s children. “My kids not only know that Wednesday is for church, they know it’s the day for soup kitchen, and they wouldn’t miss it,” she said.
“I think my kids will be doing this someday, too.”
Working with the soup kitcheners has not only met the needs of others, but it has also blessed the members, according to Brackney, who has been a minister at Lapeer since 1972.
“If we don’t serve and grow, then we aren’t doing what God has called us to do,” he said. “If people just sit on a pew and drop a few dollars in the plate each week, they aren’t going to grow.”