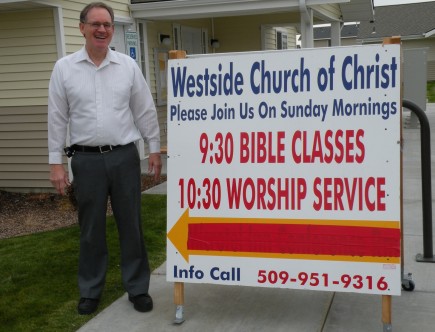 Membership in decline: Why some stay and some leave

Bobby Ross Jr.
Editor-in-Chief
AIRWAY HEIGHTS, Wash. — In raising their four children, Patrick and Sara Newbill always made church a priority.
The Newbills prayed that their daughter and three sons would grow up to be strong Christians.
The parents sent each child to a university associated with Churches of Christ.
“We really wanted them to remain true and faithful to the Lord,” said Patrick Newbill, minister of the Westside Church of Christ, a 40-member congregation planted about five years ago in this suburb west of Spokane.
“We just saw the influence of the world and just how being stronger in the Lord is so important,” he said. “We hoped that they would be able to meet mates that would be of the same mind and the same heart. Up here in the Northwest, the church is pretty weak.”
Despite their parents’ best efforts to keep them in Churches of Christ, two of the Newbills’ children have left the fellowship.
“Being burned out on the Church of Christ environment drew me to open my mind a little,” said Ben Newbill, a graduate of Cascade College in Portland, Ore. He attends City Bible Church, a Portland megachurch that draws roughly 5,000 worshipers to its three locations.
His father grieves over his son’s decision.
“If you’re going to be faithful to Christ, you’re going to be faithful to his church,” Patrick Newbill said. “We know there are certain practices that we are commanded to do. It is a heart- wrenching thing to see our young people go the other way.”
Still, the minister said he can see why young people sometimes leave: “I think we’ve kind of let them down in a lot of ways. Our younger generation, our younger families, they need to be encouraged. They need to be able to have songs and a service that might be a little more contemporary or spirited.”
•

Each family is different, each story unique. But in many ways, the Newbills’ experience epitomizes that of many families who have struggled with children leaving the fellowship.
Just a few years removed from serving in the U.S. Marines during the Vietnam era, Patrick Newbill first came in contact with the Church of Christ in his early 20s.
He studied the Bible with young ministers who were starting a congregation in Cheney, Wash., and met Sara, his future wife, who was involved with the church plant. He found himself drawn to the Restoration idea of a simple, timeless faith.
“I think it was just going back to what the early Christians did and how that we can do the same thing today,” said Patrick, who was baptized in 1976. “That inspired me.”
He decided to become a preacher, moving with Sara to Dallas to attend Preston Road School of Preaching. In 1981, the Newbills returned to the Northwest as Patrick began his first full-time ministry in Idaho.

In his earliest memory of church, a pint-sized Tim Newbill sits on his mother’s lap and listens to the preacher.
“At the end of the sermon,” said Tim, now 24, “the preacher would give a piece of candy for counting how many times he used the word ‘Jesus.’”
Tim remains in the Church of Christ. A computer programmer, he worships with the Downtown Church of Christ in Searcy, Ark., where he attended Harding University.
“My parents gave me a solid foundation to begin to explore the Bible for myself,” he said. “It wasn’t until college that it solidified, though.”
Tim said he made a conscious decision to stay in the Church of Christ.
“I’ve attended different types of religious services — Islamic, Buddhist, Greek Orthodox, various Christian branches, et cetera — and I’ve certainly become more open to working with people rather than condemning them,” he said. “I just feel drawn to the Church of Christ and will most likely work out my faith from there.”

As early as age 5, Jon Newbill, 31, recalls joining his dad at the front of the auditorium and helping lead “Jesus Loves Me.”
Jon, a surveyor who lives in Spokane, credits his parents with instilling in him a strong faith. The Church of Christ, he said, played a “huge and positive part” in his upbringing.
But Jon, who began college at Oklahoma Christian University before finishing at Washington State University, left the Church of Christ and attends the Living Faith Church.
“It does have a lot of similarities to the Church of Christ, but it is instrumental and is slightly different,” Jon said. “I have no real issues or concerns about the doctrine or beliefs of the Church of Christ, although sometimes I feel that people who attend feel that when they get to heaven they will only see people there that attended the Church of Christ.
“I still maintain my same beliefs but feel that I can worship God in a pleasing manner in a building with other believers that does not have the Church of Christ sign out front.”

Julie Neely, 27, flashes back to a time when her mother taught Bible class and rearranged the Sunday school bulletin board. Church, she said, “was a huge priority in my parents’ life and still is.
Julie, who earned an education degree from Harding, remains in the Church of Christ. She, her husband, Benjamin, and their two young children attend the Vandalia Church of Christ in Ohio.
“I am thankful I married someone who has the same beliefs as me so we can support each other in the faith,” Julie said.
“This is not my dream church, but my husband and I are trying to help them grow because there is so much potential,” she said of the 100-member Vandalia congregation. “They are a small but loving congregation. They have a hard time with change.”
Julie said she “will always be a part of the Church of Christ” because she wants her children to enjoy the same experience she did.

As a boy, Ben Newbill, 29, attended services every Sunday morning, Sunday night and Wednesday night and enjoyed “singing loudly with friendly people who genuinely cared about my well-being.”
After graduating from Cascade, he worked with a Church of Christ start-up for about four years, but he left in frustration. In Churches of Christ, he said, he encountered “consistently closed-minded attitudes across the board.”
“Leaving the Church of Christ environment was difficult but also refreshing,” he said.
City Bible Church is “growing like crazy,” he said, particularly among 20-somethings. He likes the church’s emphasis on missions, helping the needy and being personable.
At the same time, he acknowledges that he’s not overly comfortable with speaking in tongues or worship assemblies that sometimes feel like a concert.
“I’m very satisfied with the current church situation and not looking to return to a Church of Christ,” said Ben, who is married with a young daughter.
His choice of churches has strained his relationship with his father.
“You’re just not as close to people who are going to walk away from the church,” Patrick Newbill said. “You’re definitely saddened by it. … And I think I have blown it a little bit in that I’m too direct and sometimes too offensive.”
But the family all came together for the recent wedding of Tim Newbill and his bride, Rachel Cervas, a member of the West Houston Church of Christ.
“We celebrated this event with all four children,” Patrick Newbill said. “We still love each other despite our differences in church attendance.”

Filed under: By The Numbers National