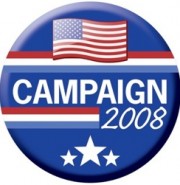 Members in all 50 states weigh in on presidential race

Bobby Ross Jr.
Bruce Bates votes red in a blue state.
Leslie Kenney votes blue in a red state.
But both say Christians should be more concerned about the broken state of the world than the state of U.S. politics.

“Our challenge has been to plant and grow a church in a blue state when typically we have been a red state movement and culture,” said Bates, minister of the Blackstone Valley Church of Christ in Cumberland, R.I.

Kenney, whose husband, Steve, preaches at the Fellowship Church of Christ in Russellville, Ky., said: “I strongly believe the pulpit is not the place to promote political ends.”
Bates and Kenney were among dozens of church members — in all 50 states and the District of Columbia — who responded to a recent political questionnaire by The Christian Chronicle.
While not a scientific survey, the questionnaire gauged members’ views and attitudes on the 2008 presidential campaign that has dominated the nation’s headlines.
Among the findings:
• Members polled favor Republican John McCain over Democrat Barack Obama by a roughly 2-to-1 margin, with many still undecided and Democrat Hillary Clinton drawing little backing.
Despite McCain’s favored status, most of his Church of Christ supporters described him not as their top choice but as “the lesser of three evils,” as Michael Moore, a member of the Mid-Valley Church of Christ in Sandy, Utah, put it.

“Not because I like him,” Charlie Harrison, minister of the Brunswick Church of Christ in Maine, said of his planned vote for McCain. “I consider him to be the person I can live with as president,” added Harrison, who listed the war in Iraq, the economy and “so-called gay rights” as issues important to him.

• On the other hand, a number of members told the Chronicle they are reassessing their political leanings in light of the war in Iraq and concern about issues such as health care, poverty and immigration.
In past presidential elections, a majority of conservative Christians — including Church of Christ members — have voted Republican because of that party’s opposition to abortion and same-sex marriage, according to national surveys.

“I discovered last year that God isn’t a Republican,” quipped Michael Lewis, minister of the Dalton Gardens Church of Christ in Coeur d’ Alene, Idaho, and an Obama supporter. “Seriously, I voted for Bush the last two times and want to try another approach.”

Likewise, David May, a member of the Eagan Church of Christ in Minnesota, said he is leaning toward Obama despite reservations about him.

“My faith has kept me voting on the Republican side because of the abortion issue,” May said.
“It is a hard year, weighing immigration issues against abortion, but I am becoming more convinced that Congress is not the place to fight the abortion question — it is in the hearts and minds of our neighbors.”
HOW WOULD JESUS VOTE?

Still, members such as Rosa Hurst of the Campus Church of Christ in Norcross, Ga., question how a Christian could support Democratic candidates who advocate abortion rights and gay marriage.

“I know Christians who vote for Democrats, and I have a hard time understanding how they could do this,” said Hurst, who preferred former Republican presidential candidate Mike Huckabee, a Southern Baptist pastor, but plans to vote for McCain.

Paul Johnson, a member of the Lander Church of Christ in Wyoming, said: “I do not believe that a Christian can ever totally agree with any ‘secular’ party, and this is especially true of the Democratic Party.”

Johnson cited Democrats’ support of “alternative lifestyles” as one example.
“Christ said to accept the sinner, not the sin,” he said. “We must reject anything that says we have to accept the sin.”

But issues such as the environment, health care, the cost of prescription drugs, the economy and the Iraq war concern Philip Sturm, a member of the Lynn Street Church of Christ in Parkersburg, W.Va. He backs Obama.

“Older Christians are still hung up on the abortion and gay rights issues, though in spite of promises, the Republican administration, Congress and the Supreme Court have made no progress in these areas,” Sturm said.
GOD’S PARTY?

Robert Randolph, who worships at the Brookline Church of Christ in Massachusetts, said the Democratic Party is more in line with his commitments as a Christian.

Randolph, an Obama supporter, mentioned the war in Iraq and poverty in America as issues that will influence his vote.
“I have wondered a long time how one could be a Republican and be a Christian, but I have kept the concern to myself,” Randolph said in response to the opposite question. “It is nonsense to identify a political party with the will of God. We ought to know better.”

Both major parties have “become corrupt, morally and ethically,” said Michael Swanson, a Republican voter who is youth minister at the Rio Rancho Church of Christ in New Mexico.

As Swanson sees it, “Christians have touted the virtues of the Republican Party and the Moral Majority, all of which have let us down.”
“It seems the only allegiance we should really have is to Jesus, and to filter all political decisions through that paradigm, not on the false hopes and promises of wicked men and women,” Swanson said.
Bill Litman, a minister who lives in Lebanon, Pa., said: “As I grow older, I find myself becoming more and more confident that Jesus will use any political outcome to his own glory and the ultimate benefit of his people. That means I don’t have to become a missionary in a foreign land out of protest just because my candidate didn’t prevail.”
WHERE REAL HOPE IS FOUND
Bates, the Rhode Island minister, said there’s no doubt that Christians want to vote for someone who “stands for God.” The tricky part: Figuring out who that is.
“Many felt like they were getting that last time and have been disappointed,” Bates said. “I think mainly I’ve tried to emphasize that our only hope for change is in Jesus.”
Kenney, the Kentucky preacher’s wife, said she tries to keep any political involvement on her part behind the scenes, “so my views may not cause another to make wrong judgments about Jesus.”
“I think Jesus would seek and save the lost, the hurting, the troubled,” she said. “He would seek the aborting woman. He would help the gay. I don’t see him using political ends to change these people.”
Under federal law, churches cannot endorse political candidates, or they risk losing their tax-exempt status.
But members interviewed by the Chronicle said that’s not the only reason congregations should exercise extreme care when dealing with the subject.

“Whenever any flag is wrapped around the cross of Christ, the cross of Christ is devalued,” said John Moore, preaching minister at the Patchogue Church of Christ in New York. “Surely we are to contribute mightily to the kingdoms of this world, but our supreme allegiance is to another that is very much present and yet to come.”

At least one congregation — the Laurel Church of Christ in Maryland, just miles from the nation’s capital — designated its building as a “politics-free zone.”

“Personally, I love politics. I love living in the D.C. area and being able to walk out my back door and be standing in front of the White House or Capitol building in an hour,” Laurel preaching minister Michael Ray said.
“But I just wish more of us would be as excited about telling our neighbors and friends about our Savior as we are about telling them who we think they should vote for this year.”