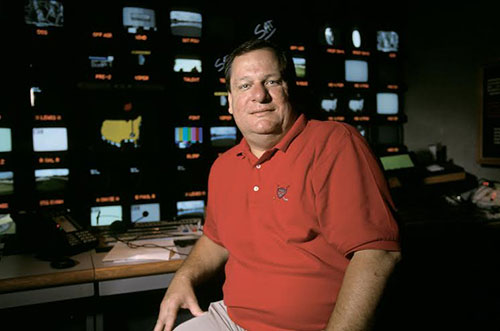 Masters of media at Amen Corner

As Abilene Christian University announcer Grant Boone attended a press conference involving golf legend Jack Nicklaus before the start of this week’s 80th Masters tournament, he found himself standing next to another ACU alumnus, Doug Ferguson, a longtime writer for The Associated Press. 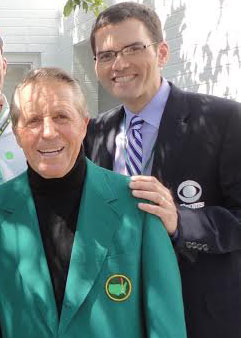 Grant Boone poses with Gary Player. (PHOTO PROVIDED)Boone will spend the next few days sitting next to Billy Ray Brown, another brother in Christ, doing a broadcast for Masters.com, CBS.com and DirecTV from perhaps golf’s most famous set of holes — Nos. 11, 12 and 13, known as “Amen Corner” at Georgia’s Augusta National Golf Club.

Yet another Christian and ACU graduate, Lance Barrow, is the coordinating producer of golf (and NFL) events for CBS Sports, which means he’s ultimately in charge of the television broadcast of golf’s first major tournament of the year.

It’s quite the media presence for members of Churches of Christ at one of the biggest sporting events of any year, and it’s something none of them take for granted, Boone said.

“The Masters is one of those rare events that manages to exceed the highest expectations,” Boone said. “It’s always a thrill to come to Augusta National. It is a dream for a golf announcer.

“It is rather odd how many guys from ACU are involved in golf media,” he added. “It’s just bizarre. It’s not like a school like Syracuse or Missouri, which have a great history of pumping out legendary broadcasters. To have a tiny school like ACU, and to have the producer of the Masters television broadcast, Lance Barrow, and the most widely read golf writer in the world, Doug Ferguson, then me at the Golf Channel and CBS, I can’t imagine what the statistical odds would be.”

Barrow, who attends The Hills Church of Christ in North Richland Hills, Texas, worked his first Masters for CBS Sports in 1977, the same year he graduated from ACU. He worked his way up to coordinating producer and is one of only two men ever to have produced the Masters telecasts. He also serves on the ACU Board of Trustees. 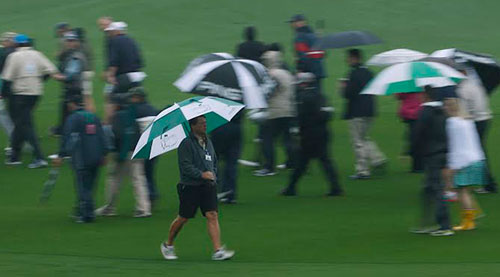 Doug Ferguson caught in the rain at the Augusta National Golf Club in 2014. (PHOTO PROVIDED)

In 1998, Ferguson – known to players and fellow media members for often wearing Hawaiian-style shirts while working – was named as the AP’s primary golf writer, a job that has him on the road for more than 30 weeks a year. When he’s at home, he attends the San Jose Church of Christ in Jacksonville, Fla.

Boone, a member of the Highland Church of Christ in Abilene, works full-time in ACU’s athletic department and serves as the radio and television voice of the Wildcats when he’s not enjoying the opportunity to work on freelance golf broadcasting assignments.

It’s Boone’s fifth year working at Amen Corner, a stretch of holes that usually play a key role in determining the champion. A Sports Illustrated writer gave Amen Corner its name in a 1958 article describing how Arnold Palmer had played those holes en route to the title. Among the features of Amen Corner is famed Rae’s Creek, in which many a golfer has lost a ball. 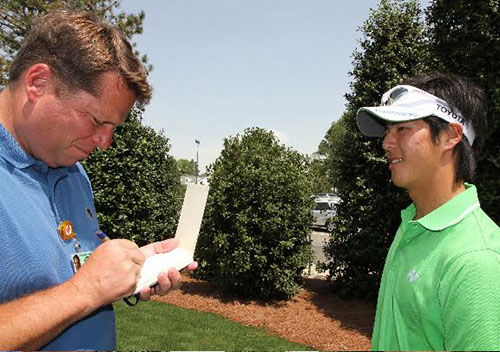 “There is no other stretch of golf like Amen Corner,” Boone said.

“People have watched those holes since the first years of the tournament. The holes are breathtakingly beautiful and so treacherous and pivotal in determining the winner. You rarely have ho-hum around Amen Corner. It is a joy to broadcast those three holes.”

Brown is a former PGA Tour pro who won three events and played in five Masters. He’s in his sixth year of working the broadcast side at the tournament. Unlike his fellow church members in the Masters media, he didn’t attend ACU, but instead went to the University of Houston. He also works for NBC Sports and the Golf Channel.

“As I walk around the course, I don’t ever take this for granted. I played there so many years. Television just does not do it justice. I like the golf course.I like all it entails. It’s a privilege to be able to do this.”

Brown said the key to broadcasting – particularly at Augusta National – is to be quiet.

“I learned quickly that you keep your mouth shut,” Brown said. “The less said, the better. You really don’t have to be concerned with the tidbits. You’ll see very few graphics about anything.

“Let the pictures tell the story.”