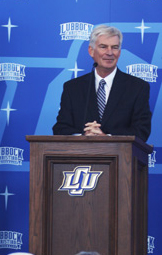 Lubbock Christian University President Ken Jones has assumed the role of chancellor and CEO.
The Lubbock Avalanche-Journal reports that Jones is expected to remain in that role for the next year while LCU searches for its next president:

Lubbock Christian University’s president today will become the first man in decades to take the title of the school’s chancellor, thus marking a gradual transfer of the presidency to a yet unknown successor.
Ken Jones, who began as LCU’s president in 2003, will continue overseeing the day-to-day operations of the university for the next year until a selection committee completes a nationwide search for his replacement.
In his new capacity, which he hopes to fully transition to by May 2012, Jones will play a more ambassadorial role in a position the school has not filled since 1974’s brief four-month chancellorship of its founding president, F.W. Mattox.
“It’s something that’s unique because of the unique talents and abilities of Ken Jones,” said Jerry Harris, chairman of LCU’s board of trustees. “Ordinarily, this could not happen, except you’ve got a man like Ken Jones that is so well respected by the community.”

Oklahoma Christian University President Mike O’Neal earlier announced plans to step down by June 2012, so at least two major universities associated with Churches of Christ will be seeking new presidents at the same time.
Read the full story.