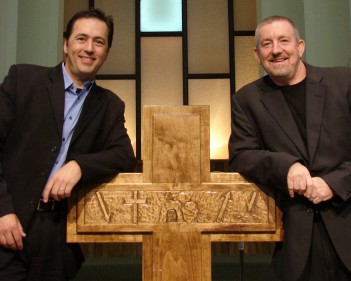 While controversy swirled around Phil Robertson Wednesday evening, the “Duck Dynasty” patriarch was at his longtime church, praying for a young woman who suffers from cancer, the TV star’s pastor told CNN in an exclusive interview.

“Phil led us in prayer,” said Mike Kellett, senior pastor of White’s Ferry Road Church of Christ in West Monroe, Louisiana. “There were greater things on our minds than the firestorm of controversy about this article.”

Asked how Robertson is taking the fierce criticism of his remarks on homosexuality, Kellett said, “He’s very calm, and very confident that if he serves the Lord, God will take care of everything.”

Robertson, 67, was suspended by the A&E network on Wednesday after the publication of comments in GQ magazine.

Kellett said his church backs Robertson, whose family is nearly royalty in West Monroe, a city of 13,000 in northern Louisiana. “We support the Robertson family, and strongly believe in our Bibles and in Jesus Christ as lord.”

The pastor said he agrees with Phil Robertson’s comments about homosexuality and is concerned about his critics’ treatment of Christianity.

“I think it’s unfortunate that when you quote the Bible people get upset about one particular sin that always seems to get a lot of attention,” Kellett said. “But sometimes the Bible is going to rub folks the wrong way.”

See our 2008 Churches That Work feature on the White’s Ferry Road church, our 2009 feature on Phil Robertson (prior to his “Duck Dynasty” fame) and our 2012 behind-the-scenes feature on the A&E Networks hit.