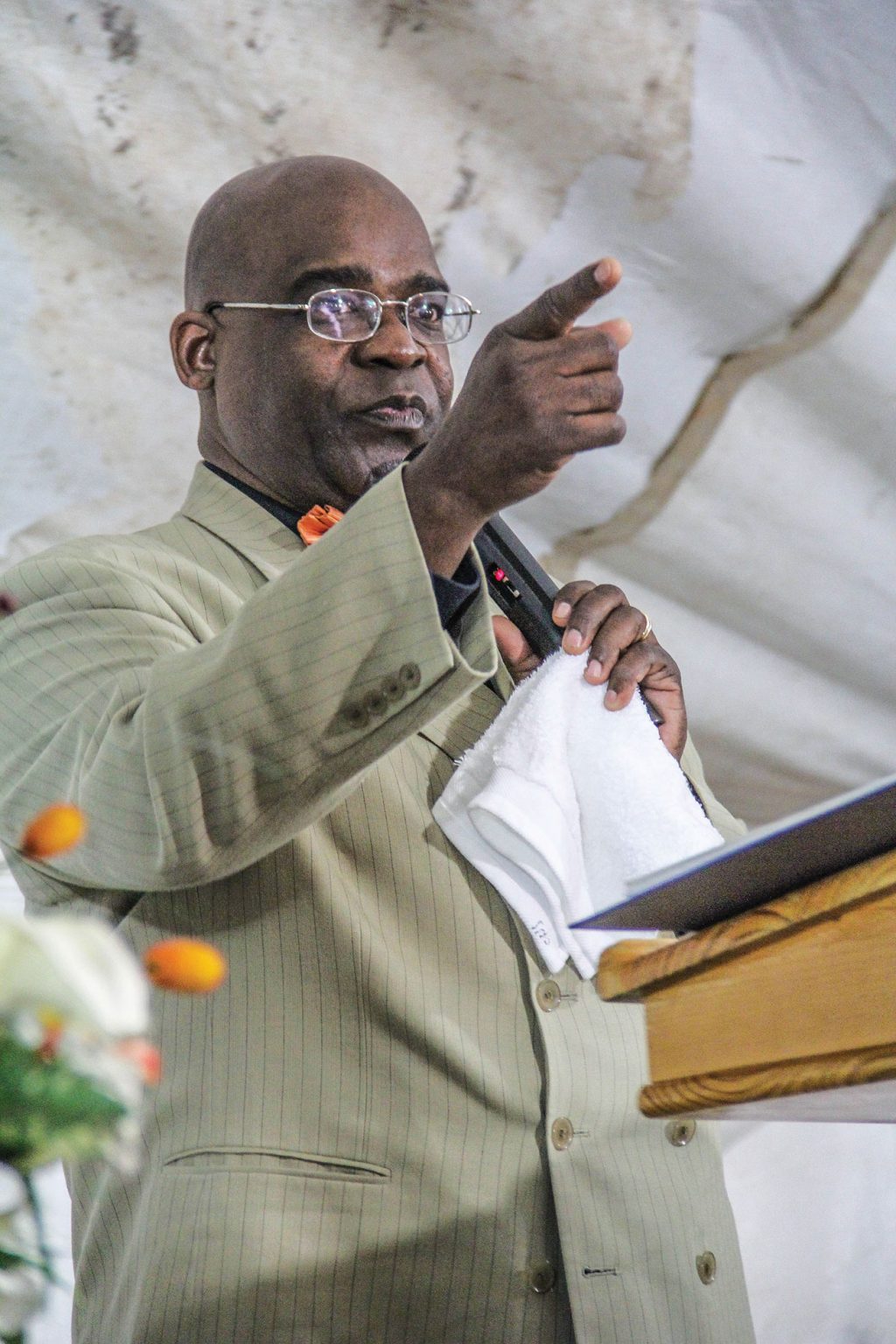 'You’ve heard the Word. Believe it. Repent of your sins, confess Christ, be baptized.' Those were Darrell Holt's final words to the Figueroa Church of Christ before he became unresponsive. Church members remember the 59-year-old evangelist as someone who 'did everything with intensity.'

Hamil R. Harris and Erik Tryggestad
When a Los Angeles congregation heard Darrell Holt preach on “Being Happy in the Midst of a Storm,” they hardly realized that, only moments later, the evangelist would go on to his reward.

“Enough happened on the cross to keep me happy for a lifetime,” the pulpit minister told the Figueroa Church of Christ as he concluded the hour-long Sunday sermon Oct. 25.

Then the 59-year-old minister said, “I need to sit down.” 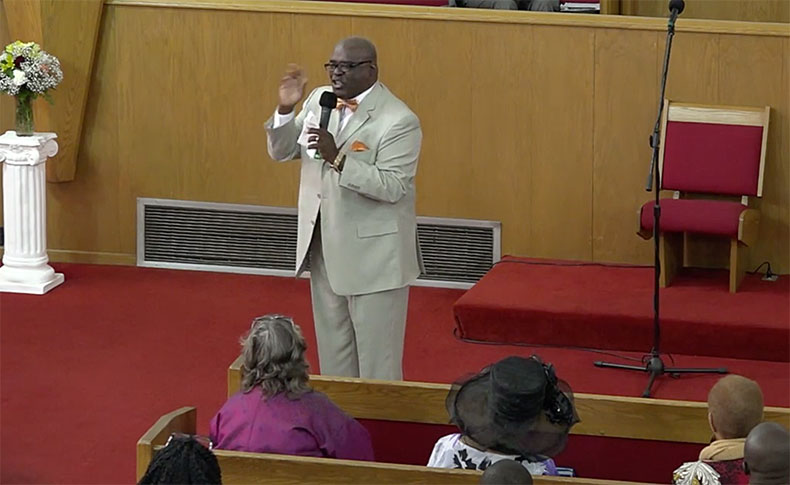 Moments before his death, Darrell Holt preaches on joy in the midst of suffering for the Figueroa Church of Christ. Watch the sermon and find other archived sermons on the church’s website.


Looking up to heaven from the front row of the auditorium, he continued.

“Jesus wants his people to be happy. If you’re not a Christian, say yes to him,” he said as he motioned for the song leader to rise. “You’ve heard the Word. Believe it. Repent of your sins, confess Christ, be baptized.”

As the congregation sang, Holt became unresponsive. Three church members who are nurses administered CPR as they waited for an ambulance. Paramedics transported Holt to California Hospital Medical Center as the congregation held an impromptu prayer service.

Soon, one of the church’s elders, Charles Cline, announced that Holt was pronounced dead at the hospital from an apparent heart attack.

Hard-charging faith
“I’m a hard-fighting soldier on the battlefield,” the congregation sang before Holt’s final sermon. 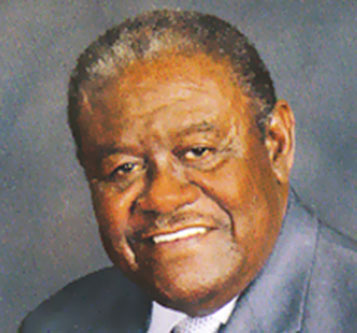 Holt, a native of Greenville, Miss., was known among Churches of Christ as a hard-charging, fiery speaker.

Holt served Churches of Christ in Mississippi, Tennessee and Michigan before joining the 450-member Figueroa church, established in 1938 after a gospel meeting by evangelist R.N. Hogan, the church’s first minister. Holt served under Calvin Bowers, the church’s pulpit evangelist for 57 years until his retirement in 2013. Bowers, 82, died Aug. 9, 2014.

SAVING SOULS ON BUSES AND ISLANDS 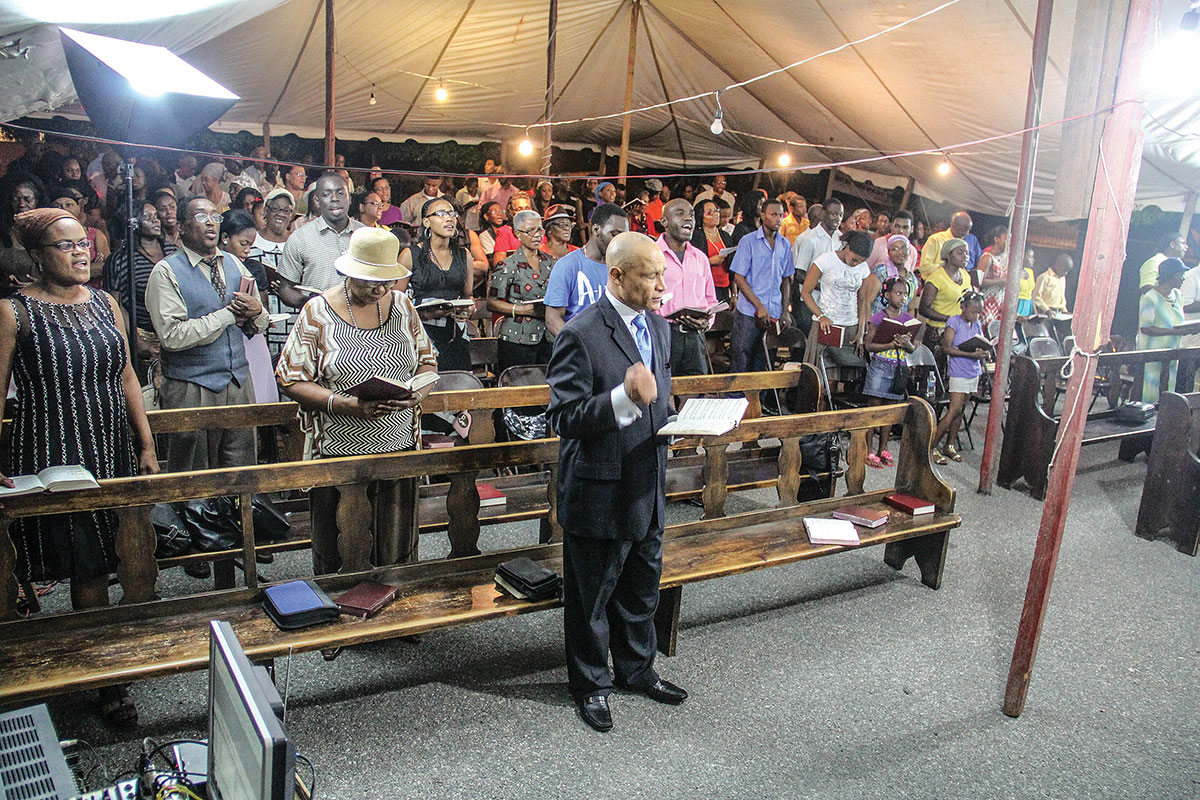 Christians sing hymns before Darrell Holt speaks at a tent meeting in Kingston, Jamaica, in 2013 (PHOTO BY ERIK TRYGGESTAD)

Holt “did everything with intensity,” said Oscar Ward, who has attended Figueroa with his wife, Sylvia, for four decades. In Mississippi, Holt rode on the church bus and preached fervently to those picked up to attend worship. Some riders were ready for baptism before they reached the building, church members recalled.

“He influenced the lives of everyone he came in contact with,” Oscar Ward said. His wife added that the minister also was a good friend, willing to help people through their trials as he studied the Bible with them.

Holt traveled the globe, preaching in the African nation of Ethiopia and hosting gospel meetings underneath massive tents in Caribbean nations including the Bahamas, Trinidad and Tobago and Jamaica.

“You don’t leave from under this tent without knowing the facts,” he promised attendees during a 90-minute sermon in Kingston, Jamaica, in 2013. The Patrick Gardens Church of Christ hosted the two-week meeting, during which Holt talked about his desire to be a “sent preacher, not a ‘went’ preacher.” He pounded the pulpit as he distinguished between the two.

Christians, sent by God, must share their faith boldly, using no authority but the Bible, he said. 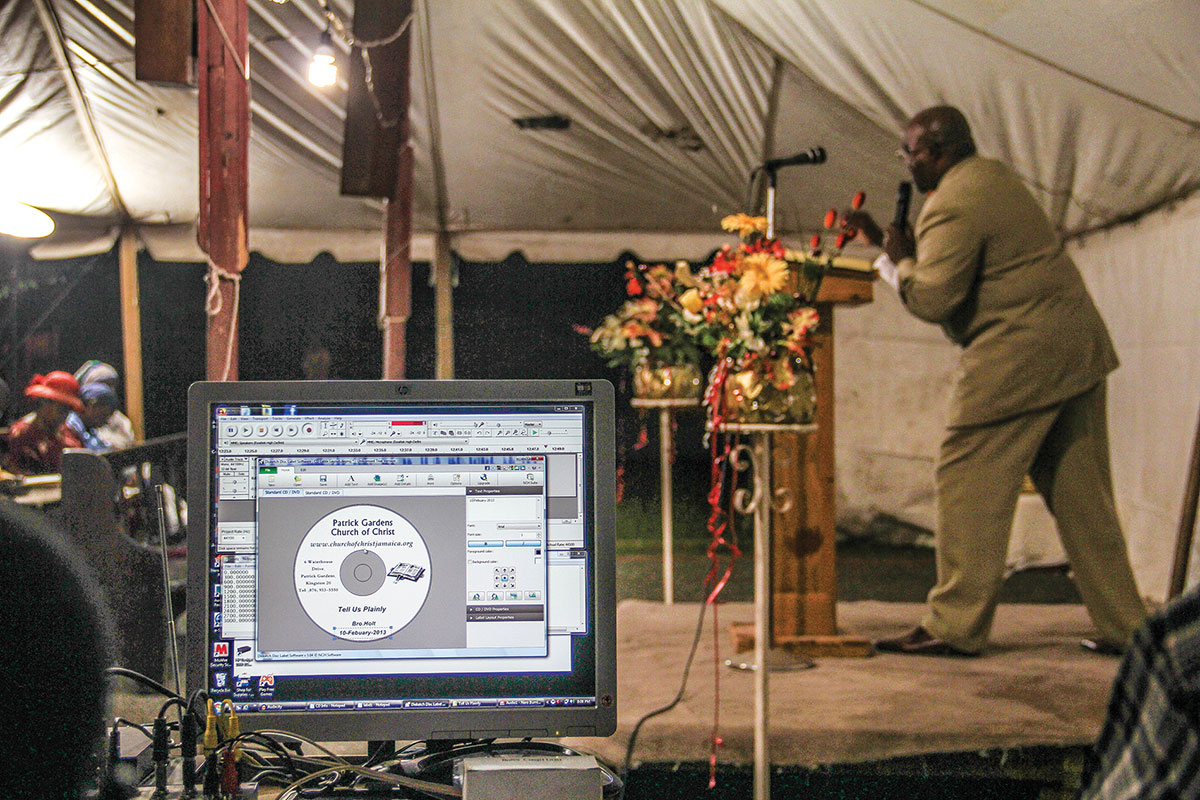 In 2013, as Darrell Holt spoke during the first night of a two-week gospel meeting in Kingston, Jamaica, members of the Patrick Gardens Church of Christ recorded his words and prepared audio CDs for distribution immediately after the service. Visitors received free copies of each night’s message. (PHOTO BY ERIK TRYGGESTAD)
IN EVERYTHING, ‘THE LORD’S HELP’
A recent gospel meeting in Bermuda, where tropical storms threaten, inspired the title of Holt’s final sermon. He preached from 1 Peter 4:12-13, in which the apostle urges believers to rejoice when they are persecuted for their faith. Christians are “partakers of Christ’s sufferings,” Holt read from the King James Version, and “when his glory shall be revealed, ye may be glad also with exceeding joy.”

Harris, the minister’s longtime mentor and friend, delivered the eulogy.

“We had as close a relationship as two ministers could have. He was very humble and very dedicated,” said Harris, who now preaches for the McAlmont Church of Christ in North Little Rock, Ark. He also serves as director of evangelism for the Crusade for Christ, a weeklong evangelistic campaign hosted every two years in a major U.S. city — most recently San Antonio.

Harris spoke on Philippians 1:21, echoing the apostle Paul’s admonition “to live is Christ and to die is gain.” Holt often talked of his own desire to proclaim the Gospel until he reached heaven, Harris said.

Even at age 19, he wrote the words “With the Lord’s help” at the end of every letter. Eventually, “The Lord’s Help” became his personal motto, Harris said.

“Whatever he did, he did it by the Lord’s doing,” Harris said. “It was the grace of God.”

Holt is survived by his wife, Anita, and their seven children.


A second memorial service for Holt is scheduled for 2 p.m. Nov. 7 at the Starkville Church of Christ in Mississippi. Willie McCord will officiate.