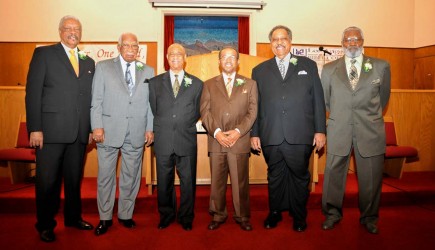 From Staff Reports
LOS ANGELES — Six ministers were honored at the Figueroa Church of Christ for a combined 275 years of preaching in the area.
The recent honor was bestowed by the Los Angeles Bible College, which is housed in the Figueroa facility.
A special afternoon program honoring the ministers began with fellowship, singing, prayers, a stroll down memory lane and a recognition of many deceased ministers who had served in the Los Angeles area — a “cloud of witnesses,” said Calvin Bowers, minister of the Figueroa church.
Some of the men recognized in the “cloud of witnesses” group were R.N. Hogan, A.L. Cassius, Arthur Perkins, Billy English, John Henry Clay, Damon Williams, Vanderbilt Lewis, Russell Moore, Lee Crowe, John Clemons, William T. Minor, Sam Cebrum, Carroll Pitts Jr., Tulsa Ellis, Ned Reed and Walter Boykin. Hogan was one of the founding members of the Los Angeles Bible College and fully supported it for many years.
In addition to Bowers, the special honorees were:
• Carl C. Baccus, minister of the Southside Church of Christ.
• O.J. Dyson, minister of the Santa Monica Church of Christ.
• Billy Curl, minister of the Crenshaw Church of Christ.
• Burl Lundy, minister of the North Pasadena Church of Christ.
• Ellis Lewis Sr., minister of the LaPuente Church of Christ.
The wives of the honorees were presented with bouquets of roses at the end of the program, and a photo of all the ministers and church leaders in attendance was taken.
The stroll down memory lane consisted of sharing portions from an extended interview of each of the six preachers honored, along with a musical salute of their favorite songs.
Each minister received a monetary gift from his respective congregation. These gifts ranged from $400 to $2,000.
The Los Angeles Bible College also gave each minister a custom-designed suit from Marvin Wilkins’ “Clothing Collection.”
“We know that ministers can always use another suit,” Bowers said.
Organizers said the main purpose in saluting these ministers was to:
• Honor and show appreciation for their many years of sacrificial work.
• Solicit support for the Los Angeles Bible College, which began in 1971 and is designed to train Christian workers for greater service.
• Encourage congregations throughout the nation to show special appreciation to ministers who have served many years.