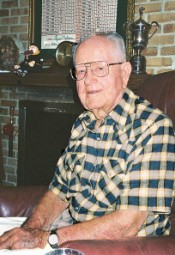 ROANOKE, Texas — A fan looking for golf legend Byron Nelson’s ranch near Fort Worth stopped at the Roanoke Church of Christ several years ago and asked the “janitor” if he knew how to get there.

Much to the fan’s surprise, the man sweeping the church floor smiled and replied, “Yes, that’s where I live.”
Years later, the story draws a chuckle from the 93-year-old Nelson, a lifelong church member known as much for his gentlemanly conduct as his 52 PGA Tour victories.

“A small church like that, the members take care of it,” said Nelson, relaxing at his ranch house below a framed needlepoint of his winning 1937 Masters scorecard, parakeets chirping in his living room as cattle grazed outside his window.

Sixty years ago, Nelson established one of the most enduring records in sports — winning 11 straight tournaments in his remarkable 1945 season.

But for the man nicknamed “Lord Byron,” The Streak seems less important than what he has accomplished since.

In mid-May Nelson hosts the EDS Byron Nelson Championship, his namesake PGA Tour event, for the 38th year. For five straight years, the tournament at the Four Seasons Resort in Las Colinas has generated more money for charity than any other PGA tournament.

In all, it has raised $82 million for Salesmanship Club Youth and Family Centers, which provide education and mental health services for thousands of Dallas area children and their families.

“It has become the best thing that has ever happened to me in golf, better than winning the Masters or U.S. Open or 11 in a row,” Nelson wrote in his 1993 autobiography, “How I Played the Game.”

The reason: “Because it helps people.”

For those who know Nelson, now a member at the Richland Hills Church of Christ in Fort Worth, that attitude epitomizes how he approaches life.

But Atchley said his favorite memory came soon after Nelson placed membership there.

“I heard someone calling my name with great eagerness,” Atchley said. “I turned around, and there was Byron, about 90 at the time, walking between the pews on two canes as fast as he could get to me.

“When I asked what the rush was, he said he just wanted me to know how blessed he was by the sermon. That’s pure Byron — not impressed with himself, but letting you know that he is impressed with you.”

When the Hilltop Church of Christ started in Roanoke several years ago, it had no baptistery. So, when a young couple accepted Nelson’s offer to baptize them, he called a nearby congregation in Justin.

“He does not have good knees, but I have seen him take people and baptize them when he didn’t feel terribly good,” said James Vinzant, minister of the Alliance Church of Christ in Justin. “But he did it because he loves the Lord so much and he loves the church so much.”

THE PGA AND THE PEWS

His mother, Madge Allen Nelson, who lived to be 98, was a Bible student and teacher. Raised a Baptist, she became a Church of Christ member at age 18.

His Presbyterian father, John Byron Nelson Sr., was baptized in a Church of Christ soon after meeting the golfer’s mother. Byron Sr., who died at 77, later served as an elder at the Roanoke church.

Nelson was born Feb. 4, 1912, on his family’s cotton farm near Waxahachie, Texas. By age 11, his family moved to Fort Worth, where a bout with typhoid fever dropped his weight from 124 pounds to 65. Somehow, he survived, but his high fever left him unable to have children.

Soon after his baptism at age 12, he started caddying at Glen Garden Country Club. By age 14, he beat another future legend — Ben Hogan — to win the Caddie Championship.

Eight years later, while working as a golf pro in Texarkana, Texas, he met a tiny brunette with pretty brown eyes during Sunday school at the Walnut Street church. Louise Shofner, the daughter of longtime church elder D.A. Shofner, would become his wife of 50 years.

In his early years, Nelson made barely enough to live. In 1936, he earned $750 by winning the Metropolitan Open. But during the tournament, he couldn’t afford to eat in the clubhouse. Instead, he sat outside, eating a hot dog and drinking a Coke.

After that tournament, Nelson was offered $500 to endorse a cigarette called 20 Grand. Never a smoker, he resisted the offer. But needing the money, he finally agreed.

“I didn’t realize (that) it meant so much,” he said. “In about a month after the ads broke, I got the worst mail I’ve ever gotten, from Sunday school teachers, from school teachers. … Well, I was just mortified.”

When the cigarette company refused to take back its money, he said, “I toughed it out and I prayed about that more than any one thing. That shows what God will do for you. I promised him that I would never do anything like that again.”

While he played on Sundays, Nelson said he always found a way to attend church services, either in the morning or at night. “People say, ‘How in the world did you go to church?’ And my answer to that is, you can do things that you feel you need to do.”

When Louise died in 1985 after suffering two severe strokes, Nelson was devastated. But soon afterward, he said, God blessed him with a second wife. He had first met Peggy Simmons — 33 years his junior — at a charity golf tournament in 1981. Lord willing, they will celebrate their 20th anniversary next year, he said.

Like her husband, Peggy is active at the Richland Hills church. As he has most of his life, Nelson still attends services each Sunday and Wednesday night, using an electric scooter to maneuver his way through the crowd.

“I wouldn’t know what to do without being at church,” he said. “The good Lord blesses me every day.”