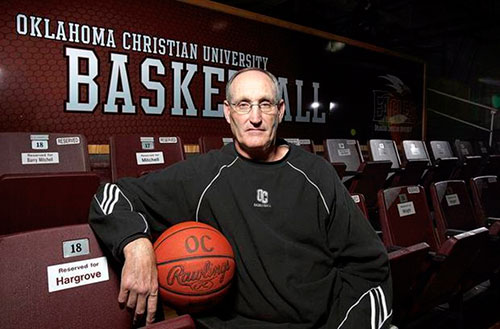 Even though he’s coached college basketball for more than four decades and has won more men’s games at a four-year college than any other coach in the state’s history, Hays sweeps the court at Oklahoma Christian University. Doesn’t matter that the court has his name on it. Doesn’t matter that pretty much every assistant or manager who’s ever worked for him has offered to sweep for him.

He sweeps even as he prepares for his last game at Oklahoma Christian because it reminds him where he came from.

And those early days explain why he’s stepping away from his job.

“I never thought this day would come,” he said.

Hays would love to stay at Oklahoma Christian forever, and decision-makers at the school would sign on to that. Earlier this week at the induction banquet for the school’s athletic hall of fame, athletic director Curtis Janz broke down when trying to say thank you to Hays.

Even as Hays’ team struggles through its third consecutive losing season, no one is asking him to go.

But so much has changed. NCAA rules have altered the way Hays has to do business. If he’s sitting in his office in the summer and hears someone bouncing a basketball in the gym that is five steps away, he can’t go in. He can’t rebound for them. He can’t be around the game he loves.

Those aren’t rules he can live with, and so, the day is soon coming when Hays will take down the pictures and pack up what’s on the shelves.