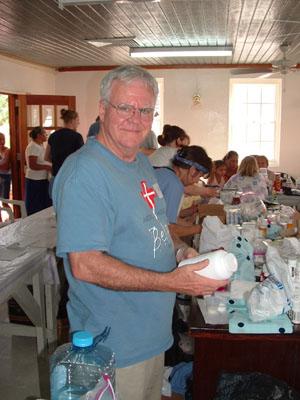 Update: The body of Bill Amason was recovered Aug. 31. See our related post.
Church members across the U.S. and Central America are praying for the family of Bill Amason, a longtime missionary to the country of Belize.
Amason has been missing since Aug. 26. He was working at Amason’s Obabikon, a resort on Obabikon Bay in Sleeman, Ontario. Amason’s son, Jared, owns and operates the resort with help from his missionary father.
Jared Amason posted details on his Facebook page:

Dad is missing and presumed to no longer be with us. He left the camp late Friday afternoon with a boat to burn a load of boxes. When he didn’t return an hour later, I went to look. I found his boat a half mile north of where he was supposed to be, and his clothing on the rock where he was burning. It appears that his boat blew off the rock, and he tried to swim after it, but didn’t make it. … The reality of the situation is that we’re now praying to be able to find his body. We’re also sending prayers of thanks for the 68-plus years that the world was a better place because he was here. Friday was also mom and dad’s 45th wedding anniversary.
If you didn’t know our dad, we’re truly sorry that you missed the most wonderful, caring, generous, honest, giving, sharing person that you could have ever met. Dad has never met a stranger and never missed an opportunity to hold a baby child. The love, compassion and understanding that he showed to every person was without judgment and with no prejudice.
Dad personally organized more than 70 mission trips to Belize, Central America, bringing medical, dental and spiritual help to the country. Many of his groups were 70 people and at times had more. The people that he helped in the name of Christ are uncountable.

Bill Amason is coordinator of Belize Missions, a church-supported ministry that brings medical mission teams to the Central American nation. I participated in a mission trip to Belize in 2006, along with longtime missionaries Windle and Barbara Kee and Dennis Cady and his family. (Here’s a feature I wrote about the trip.)
During the trip, Bill Amason took me to a prison where he studied the Bible with inmates. Our mission team also worked with a small Church of Christ in San Pedro on Ambergris Caye. In 2005, the San Pedro Sun featured Bill Amason’s medical mission work.
We will post updates as they become available.