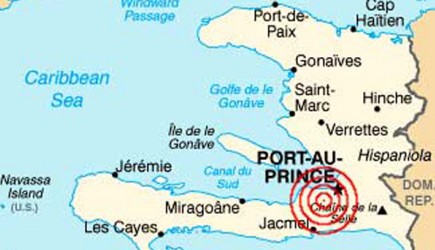 Erik Tryggestad
After a massive earthquake struck Haiti, church members around the globe struggled to make contact with family and friends and scrambled to send relief to the impoverished nation.

The quake, the worst recorded on the island of Hispaniola since 1946, claimed tens of thousands of lives and destroyed most of the capital, Port-au-Prince, according to news reports.

Church-supported ministries are collecting funds to assist in relief efforts.

The 7.0-magnitude quake struck just before 5 p.m. Tuesday, Jan. 12, about 10 miles southwest of Port-au-Prince, a city of about 2 million people in southern Haiti. The crescent-shaped nation, southeast of Cuba, shares the island of Hispaniola with the Dominican Republic and is the poorest country in the Western Hemisphere.

Though communication is difficult, church members have received some reports from Haiti:

• At least nine members of the Delmas 43 Church of Christ in Port-au-Prince died in the quake, minister Jean Robert St. Hillare said in a Wednesday morning e-mail message.
“We’re still looking for dead bodies,” St. Hillare said. “We have almost 50 members who need medical care, almost 290 homeless. That’s sad. There is not even bread to eat right now.”
The quake forced St. Hillare and his family from their home and brought down power lines, so the minister sent e-mail using a laptop computer powered by his car’s battery.
• The top two floors of theDelmas Christian Secondary School, which also serves as the meetingplace of the Delmas church, crumbled and fell into the road,said Jeantyrard Elmera, the school’s director. A nursing class was insession in the building when the quake hit. Reports of injuries wereunavailable.
• Nicky, a 15-year-old boy at a church-supported children’s home near Port-au-Prince, died when a wall collapsed. The boy lived with other children at Son Light Children’s Home and Nutrition Center, overseen by Roberta Edwards. The Estes Church of Christ in Henderson, Tenn., supports the work.

Thomas Edwards, the oldest of the children living at the home, sent a brief e-mail message to U.S. supporters Wednesday morning.

“We slept outside last night,” Thomas Edwards wrote, “and the earth was shaking almost all night every 40 minutes.”
• Debbie Vanderbeek and other church members are attempting to reach the worst-hit areas of Port-au-Prince to deliver supplies. Vanderbeek is Haiti program director for Hope for Haiti’s Children, a church-supported ministry based in Sugar Land, Texas. The ministry sponsors children in Port-au-Prince and surrounding areas.

The ministry planned to send a medical mission team to Haiti this weekend to conduct a clinic for children supported by the ministry.

“We have canceled this clinic and are waiting until we have a clearer picture of the needs and how best to proceed,” according to a statement on the ministry’s Web site. “The devastation is overwhelming.”
A mission team of 18 from the Estes church left Port-au-Prince on Monday, less than 24 hours before the quake hit. Minister Jesse Robertson described the poverty he saw in Haiti to The Jackson (Tenn.) Sun .
“Driving around, I thought if they ever had an earthquake, we’re in trouble,” Robertson said. “They hadn’t had one like this in 200 years. I saw along the side of a mountain shanty houses one on top of the other. They would collapse, and it looks like that’s what happened.”

• Oneal Tankersley, missionary in residence at Harding University in Searcy, Ark., was traveling between the cities of Gonaives to Port-au-Prince with his son, Karl, and Harding student John Cannady when the quake hit. The group was in Gonaives filming teaching videos.
They were unharmed by the quake, but their return flight to the U.S. was canceled, said Dr. David Smith, a church member who directs the Haitian Christian Development Project. The group traveled to the neighboring Dominican Republic and is scheduled to fly home Thursday, Jan. 14.
“Gonaives, our development work and the communities with which we work … were apparently spared,” Smith said.
Gueston Pacius, a church member in Gonaives and development director for the Haitian Christian Development Project, plans to take relief supplies to Port-au-Prince.

• Church members in northern Haiti experienced “tons of shaking and aftershocks” but no significant damage, said Bob Valerius, who works with the Cap Haitien Children’s Home.

• Despite the lack of damage in the north, people across Haiti will soon feel the impact of the quake as food and fuel become scarce, said David Heath, a member of the Littleton, Colo., Church of Christ. Heath and Ben Adkins of Louisiana-based White’s Ferry Road Relief plan to leave Friday to assess needs and purchase gas and food to distribute to those in need.

The church members already planned a relief trip to Haiti next week, and now are stepping up their plans, Heath said.

A GLOBAL CALL FOR PRAYER

Haitian-born minister Saint-Jean Jean-Pierre spent much of Tuesday night on the phone, fielding calls and text messages of concern from the members of his congregation in West Palm Beach, Fla.

Jean-Pierre, who moved to the U.S. from Haiti about 13 years ago, preaches for a Church of Christ with about 75 members — all from Haiti. Many work in restaurants or service industries in southern Florida. The church conducts services in French-Creole.

“I’ve been receiving a bunch of calls,” the minister said. “They want to know what happened to the houses (in Haiti). There’s a lot of crying.”

Church members had a conference call Tuesday night to pray for the people of their homeland and plan additional prayer meetings as they wait for news.

The quake shook church buildings in Kingston, Jamaica, said Gladwyn Kiddoe, minister and director of the Jamaica School of Preaching and Biblical Studies. No damage was reported. Jamaican church members plan to meet Thursday, Jan. 14 at the Mona Church of Christ in St. Andrew, Jamaica, to discuss relief strategies, Kiddoe said.
Meanwhile, emotional shockwaves from the quake have reached Christians as far away as Africa.

“Two families from our church and school are still trying to reach relatives there,” said Holly Hixson, a missionary in Kigali, Rwanda. “They have asked us to pray.”

Jean Balcom, a member of the West Fayetteville Church of Christ in Fayetteville, Tenn., has traveled to Haiti multiple times to assist Roberta Edwards in her work near Port-au-Prince. Watching news reports from her home, she’s seen markets and buildings she’s visited — now reduced to rubble.

Even before the quake, “it’s hard to put into words the devastation you already see over there,” Balcom said, “so to see more … it’s overwhelming.”