GATLINBURG, Tenn. — Envision a crowd at a rock concert — a mob of frenzied fans lined up hours early waiting for the doors to open.

Picture the scene at a national political convention — a throng of party faithful with crazy hats and colorful signs.

Imagine the audience at a “Let’s Make A Deal” game show taping — a sea of zany outfits and costumes.

Mix all that together. Throw in a huge dose of agape love. And you begin — begin — to comprehend the scene as 12,147 teens and sponsors from Churches of Christ in 27 states converge on this mountain resort town.

“Winterfest is a like a shower after a really long, hard day,” said Cana Moore, 18, a member of the Patchogue Church of Christ in New York, whose youth group made an 800-mile, all-night drive to attend. “You feel refreshed and cleansed, and it gives you a renewed energy.”

Each teen received a special chronological edition of the New Testament — with no books, chapters or verses marked.

“You read it like a novel,” said Dudley Chancey, Winterfest director. “The idea is, it’s a new way to try to read the text and get them into the text.”

Along with the Bible, each teen got a black wristband with “TWELVE” stamped in white letters — a reminder of the disciplines studied.

“I have studied spiritual disciplines before, but I feel like this year I have a more complete list,” said Moore, whose father, John, preaches for the Patchogue church. “I intend to follow the 40-day Bible reading plan since consistency in my reading is something I struggle with, and I also intend to fast more frequently.”

It’s “one big Jesus party,” as Josh Ross, minister for the Sycamore View Church of Christ in Memphis, Tenn., describes the teen pilgrimage to the Great Smoky Mountains.

As thousands of Christian young people flock beside orange cones outside the Gatlinburg Convention Center, Will Houghton waves a sign offering “Free Hugs.”

The 17-year-old member of the Central Church of Christ in Benton, Ky., sports a flashy pair of white sunglasses and a marching-band-style hat with an orange flashing light atop it. In case his attire and sign don’t give it away, he volunteers that he’s enjoying himself — and growing closer to God.

“We call it a holy high,” he said of his youth group’s experience.

Winterfest began a quarter-century ago as a small gathering of a few congregations at a Tennessee state park. It has grown into one of the largest — if not the largest — annual events among Churches of Christ.

“It’s a little youth rally, and if you want to come, come,” said Chancey, who directs the Gatlinburg event as well as a separate Winterfest that draws about 5,000 teens and sponsors each year to Arlington, Texas.

“We don’t advertise. It’s nuts,” he added, reflecting on how big Winterfest has become.

Asked the secret to the success, Chancey — who teaches youth ministry at Oklahoma Christian University — chuckled and replied: “I could be theological and say it’s God.”

Amazingly, another flood of church vans and buses carrying teens from Churches of Christ invades Gatlinburg the weekend after Winterfest.

About 9,000 teens, parents and youth ministers attend the Challenge Youth Conference, now in its 13th year.

“The fact that there’s 21,000-plus wanting to come tells me that there are kids who are interested in spiritual matters,” said Larry Davenport, Challenge Youth Conference director.

Davenport, who works full time as director of enrollment for Heritage Christian University in Florence, Ala., noted that Winterfest has been “maxed out” for years.

“There’s obviously room for another Church of Christ event,” he said.

As Jeff Walling, minister for the Providence Road Church of Christ in Charlotte, N.C., puts it, no place boasts more “awesome worship of Jesus and bodacious consumption of funnel cakes.”

The faith-based groups have helped turn this small town into a four-season destination, said Jim Davis with the Gatlinburg Department of Tourism.

“We have some rules that have grown up over the years,” said Josh Byrd, youth minister for the Church of Christ in Falls Church, Va., which brought 15 teens and 12 adults.

The Northeast Church of Christ in Cincinnati? That’s the youth group gathered around the life-size poster of John Wayne.

The Friendly Avenue Church of Christ in Greensboro, N.C.? That’s the youth group with the rubber chicken bobbing atop a wooden stick.

The West Metro Church of Christ in Hiram, Ga.? That’s the youth group with a poster featuring a “TNBC” peacock — a takeoff on the CNBC television logo. The church acronym, by the way, stands for “Teens for Nothing But Christ.”

In a crowd this size, staying together can be difficult.

That’s where the group-specific symbols come in — from a skeleton head to a “Tebowing” poster to a hand-carved wooden cross.

Then there’s the stuffed tiger that came with the youth group from the Holland Park Church of Christ in Simpsonville, S.C. — a mascot born out of a joke.

On the “What to Bring” list distributed before the trip, Holland Park youth minister Charlie Sells included a “pet tiger” to make sure everyone was paying attention.

“Our students took it very literally and seriously,” Sells said. “Easily half of them came up to me shortly after reading this and asked questions such as, ‘Where am I supposed to get a pet tiger?’ and ‘Do you think the hotel will really let us have one?’ and — no joke — ‘Can I bring a giraffe instead of a tiger? That’s all I have.’”

During the three-day retreat, participants split into early and late groups in the 6,500-seat convention center. They assemble in a ballroom that stretches longer than a football field and displays the speakers’ images on nine big screens.

“It’s a powerful experience seeing 6,000 teens just opening up and praising God together,” said Forrest Park, 15, a member of the Nashua Church of Christ in New Hampshire. “Also, the speakers are just phenomenal with such wisdom and knowledge that one can really learn from.”

For Park and other New England teens, an anticipated 17-hour bus ride to Winterfest ended up taking 22.

“Our bus broke down halfway through, so we stayed at a truck stop for three hours, messed around and sang songs in the parking lot,” said Bonnie Foreman, 17, a member of the Greater Springfield Church of Christ in Chicopee, Mass.

She wasn’t complaining, though.

“Massachusetts, being New England, it’s like really weak in Christianity. There’s not many Churches of Christ,” she said. “I love coming here because you meet 7,000 other kids that are the same religion as you, that have the same troubles. You don’t feel like you’re the only one.”

Back home, Foreman cleaned out her bedroom and closet — an effort to remove unnecessary clutter.

“I am going to bring the items to a battered women’s shelter,” she said. “I want to be disciplined in all 12 aspects, but I thought ‘simplicity’ was a good place to start.”
In a Friday night session, Rich Little — one of four keynote speakers along with Ross, Walling and Patrick Mead — invites the crowd to text one-line prayers to God.

Little, minister for the University Church of Christ in Malibu, Calif., said the exercise illustrates an important lesson about the emerging generation.

“They want to engage,” he said. “So, if we could find ways to have them on stage, to have them make a public commitment or to share a prayer on a screen, then they have ownership of what they’re hearing, as opposed to being preached to and not having any ownership or participation.”

At Little’s direction, thousands of teens click away on their smartphones.

Their prayers appear instantly on the big screens with messages such as:

“i love you jesus.” “Help me be more like you.” “Forgiveme.” “God i want your name glorified in my life.” “Lord lead my life to serve you … to let me live this life for you.”

Despite Gatlinburg wildfires, Winterfest will go on as scheduled

Each year, 12,000 teens and sponsors gather to praise God… 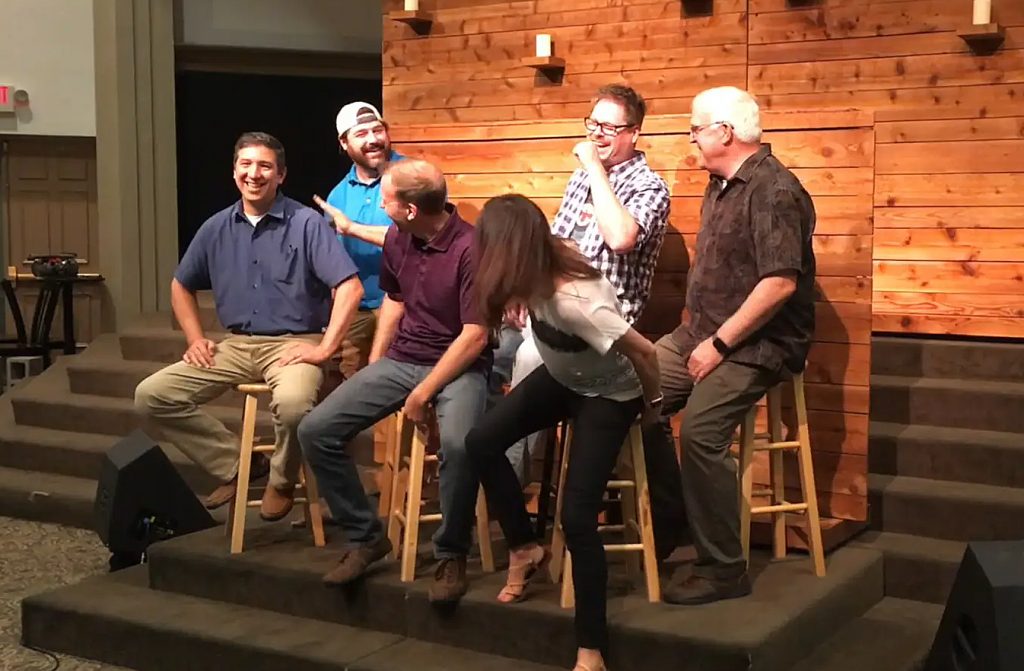 Christians across the nation are mourning the sudden death of… 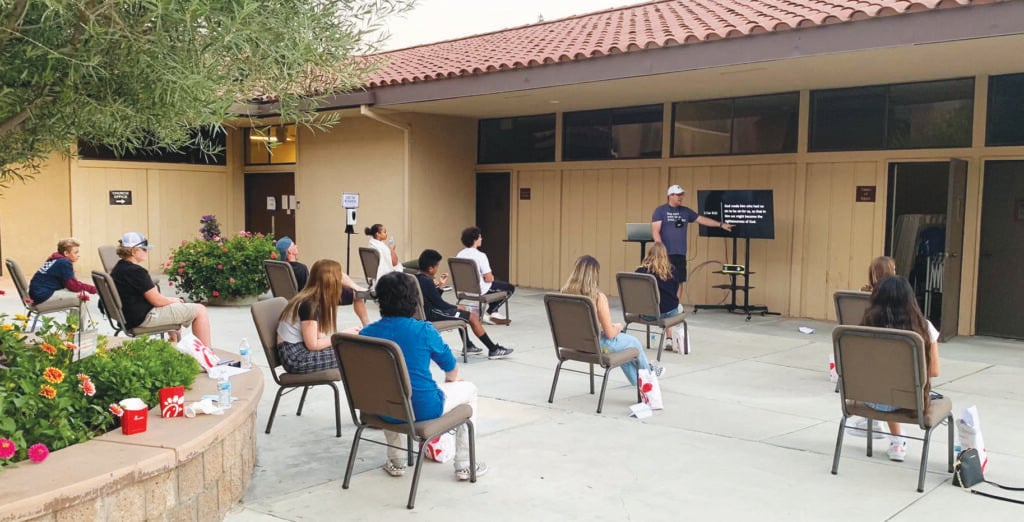