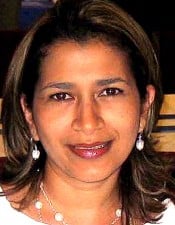 Little girl grows up to serve her people

Staff Reports
CATACAMAS, Honduras � — The old woman was lifted onto a stretcher, her broken, swollen leg wrapped in a blanket. Four men — two on each side — hoisted her skyward and began walking.
They had no choice. There were no doctors in a vast mountain region in the state of Olancho.
How could there be when the roads weren’t even passable by car?
Three hours later, the men gingerly eased her into a waiting vehicle for the rest of her journey into Catacamas, where her leg could be examined and treated.
That was 1975. And the woman was Martha Rivera’s grandmother.
“I was very close to my grandmother,” said Rivera, 39, who now oversees church-supported Mission Predisan — including seven rural clinics in areas like the one where she grew up. “That experience, watching her suffer and others struggle so she could get medical help, it was difficult.”
The perseverance of other women in her family also shaped Rivera. Her mother, a rural schoolteacher, insisted that her children be well educated.
The farming family purchased a Jeep and a second home in Catacamas, and Rivera and her siblings attended junior high and high school near there.
Her senior year, Rivera studied English in Tegucigalpa, about three hours away, and applied to attend college in the United States.
She learned she was accepted on scholarship to Johnson State College in Vermont.
And then, at 18, she discovered she was pregnant.
Her extended family rallied around her, insisting she get her degree.
Rivera delivered baby Nicole, left the infant in her mother’s care and returned to Vermont to finish her freshman year.
“It was an incredibly difficult time,” she said. “I was determined to do the best thing for all of us.”
Afterward, she returned and married Renan Hernandez, Nicole’s father. She graduated with honors in 1993 and welcomed two more children to the family: Kimberly and Oscar.
In 1996, she interviewed for an administrative position at Predisan -— attracted to the idea of working two blocks away from her home so she could spend more time with her children.
“The first day of work, I saw something strange,” Rivera said. “Every afternoon, we had Bible studies. For a while, I wondered why they talked about the Old Testament. I had no idea how that could possibly be relevant today.”
She began studying with Doris Clark, Predisan’s American co-founder, a few months later, and was baptized in a swimming pool in Catacamas.
She credits Clark and former executive director Amanda Madrid, now a fund-raiser for Predisan in the U.S., with helping her grow her faith in the years since.
“I look back and I see that they were grooming me for what I’m doing now,” Rivera said. “The mentoring experience was not as evident then, but it is today. Now, I lead one of the Bible studies every morning.”
Clark and Madrid also encouraged Rivera to continue her education.
She quit working full-time for Predisan in 2003 to pursue a master’s degree in finance, returning once she was confident she could manage everything.
Madrid said Rivera’s skills and personality have endeared her to the staff.
“Martha is wonderful for the ministry,” Madrid said, “and I believe so deeply in her abilities. She has a great way of communicating her expectations, knowing people will rise up.”
Daughter Nicole, now 18, is a pre-med student in Tegucigalpa.
She was drawn to the idea of practicing medicine from watching visiting surgeons and helping translate for patients, her mother said.
Kimberly, 13, and Oscar, 12, are leaning toward other careers. Rivera hopes they’ll study in the states and return home to work someday, like she did.
“The experience of studying abroad, the world view you get, is so important,” she said. “But it’s also crucial to come back and put that education to work here, for the people of Honduras.”
Visits to people in the most remote of Predisan’s clinics connect Rivera’s present life to her past.
The trips aren’t easy, by any means.
On a recent outing, her vehicle became submerged in an overflowing creek and she had to wade out in waist-high water.
Those are the risks she gladly takes for the reward of perspective.
“When I go to the mountains now, I imagine my mom, the way she had to carry me on horseback for two hours to the doctor when I was sick,” she said.
“I think a lot about what life must have been like and how different mine is, and how much improved the quality of life is for those who live in the valley.
“I’m incredibly blessed, and my dream is to pass that on.”