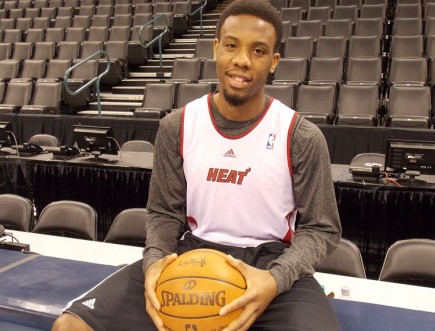 Murray Evans
OKLAHOMA CITY — Miami Heat rookie guard Norris Cole has an opportunity afforded only a small percentage of basketball players – the chance to play in the NBA Finals.
The lifelong Church of Christ member has played in a reserve role this season for the Heat, who are in Oklahoma City this week to take on the Thunder in the Finals, which start Tuesday. After a second game in Oklahoma City on Thursday, the best-of-7 series will shift to Miami starting on Sunday.
Cole, who grew up in the Webster Street Church of Christ in Dayton, Ohio, and now attends the Miami Gardens Church of Christ in south Florida, said he’s tried to focus on spiritual matters as best he can as he deals with the often-hectic NBA schedule.
“It’s pretty tough, but any time we don’t have practice on a Sunday morning, or we don’t have a game or we’re not the road, I’m there (at Miami Gardens),” Cole told The Christian Chronicle on Monday. When he misses services, Cole said, he gets a DVD of the sermon and watches it later.

Becky Poe remembers Cole, son of Norris and Diane Cole, participating in the annual Bible Bowls hosted by the Northridge Church of Christ, a Dayton congregation where her husband served as the minister.


“I recall his mother telling me at the Bible Bowl that she was very proud of him for his basketball, but she always taught him to ‘seek first the kingdom of God,'” Becky Poe said in an e-mail to the Chronicle.

The younger Norris Cole helped Dayton Dunbar High School win a pair of Ohio state championships before playing for four seasons at Cleveland State University, where in 2009 he helped the Vikings reach the NCAA tournament for the first time since 1986. The Chicago Bulls drafted him last summer and traded him to the Minnesota Timberwolves, who traded him to the Heat. He’s appeared in 15 of the Heat’s 18 playoff games through the first three rounds of the playoffs, averaging 1.4 points per game. During the regular season, he played in 65 of Miami’s 66 games – tied for tops on the team – started twice and averaged 6.8 points per game.

Look for an expanded profile in an upcoming print edition of the Chronicle.