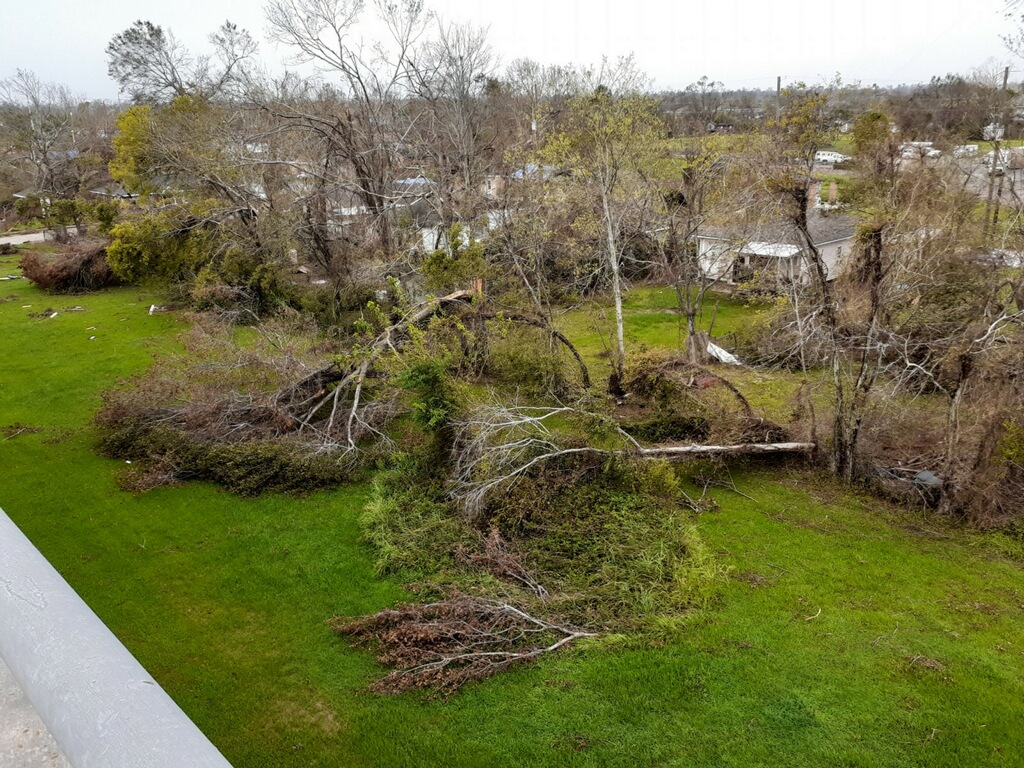 Christians describe tense moments in the eye of the storm and struggles afterward as COVID-19 complicates relief.

As Hurricane Laura tore through Lake Charles, La., in the early hours of Aug. 27, Dr. Lauren Jacoby kept watch over her patients at the Christus Ochsner St. Patrick Hospital.

Around 2 a.m., Jacoby, chief hospitalist, felt the eye wall of the storm. 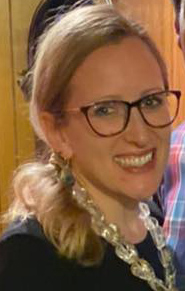 “The rain was so loud and intense. It was moving the whole hospital, making me nauseous,” said Jacoby, who was on the fourth floor of the only hospital that remained open. “I could hear the crashing of debris against the windows and the crashing glass of windows breaking.”

Lake Charles, a city of 78,000 people, lies about 30 miles due north of Cameron, where Laura made landfall as southwest Louisiana’s first-ever Category 4 hurricane. Sustained winds topped out at 150 mile per hour, shredding the National Weather Service Doppler radar system in the city.

Throughout the two-state region affected by the storm, more than 1.5 million were under some sort of evacuation order.  More than 900,000 lost power. More than two dozen deaths were attributed to the storm by mid-September, at least half from improper use of generators resulting in carbon monoxide poisoning.

Jacoby and her husband, Jeremy, who also stayed at the hospital, watched the weather radar, knowing they were right in the center of the storm – and right where they knew they were supposed to be, helping their community.

“Several other hospitals closed down because they didn’t have water,” said Jacoby, who grew up in the Memorial Road Church of Christ in Edmond, Okla. “We decided this wasn’t ideal, but we had to stay open for our community. That’s why we do what we do.”

“We were praying, ‘God help us. Let it pass quickly.’”

“Kevin always stays home during a storm so he can be available to help others in the community,” said Evie, who usually leaves but stayed to care for her mom, who is 91.

“We were praying, ‘God help us. Let it pass quickly,’” said Kevin, a deacon of the Ninth and Elm Church of Christ in Orange. “We wanted it to go away.”

“The wind sounded as if trains were going up and down the street,” Evie said. “I was amazed my neighborhood was standing the next morning.”

The Ninth and Elm church sustained minor damage: Trees fell nearby, shingles flew off the roof, and electricity was lost. But the building survived to have a communion service the Sunday after the Thursday storm and a full worship service a week later.  Evie said the congregation became a hub for local outreach.

Back in Louisiana, Bill Bunkhardt evacuated a day before Laura was expected to reach Lake Charles.

“I got pictures from my neighbors,” said Bunkhardt, an elder of the Enterprise Boulevard Church of Christ. “My house used to be completely surrounded by trees, but the storm wiped them out, and only one is left standing.” 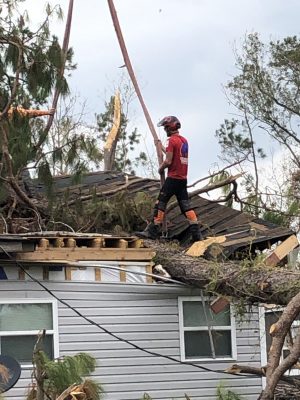 Bill Bunkhardt’s house was damaged by a falling tree.

The Enterprise congregation was one of several in Louisiana to receive and distribute trailers full of supplies sent by Churches of Christ Disaster Relief Effort, based in Nashville, Tenn. Other trailers went to congregations in Sulphur, Deridder, Pineville and Oakdale.

Bunkhardt, who is semiretired, said he came home to find a 100-foot tree had sliced his roof in two.

“We had to close off the side of our house and are living in the front room and kitchen with generators,” he said. “We have no electricity.”

The family’s running water was restored one week after the storm.

“All the power lines are down throughout town. It’s total darkness at night,” said Bunkhardt, who lives on an acre in Moss Bluff, two miles outside of Lake Charles. “I grew up on a farm with not a lot of light. But when you get used to lights and traffic (in the city), and it totally shuts down, it’s strange.”

Days after Laura barreled through Louisiana,  St. Patrick hospital still had no running water or air conditioning, and generators had a difficult time powering the entire building.

“The electricity was out, and the hospital was hot and sticky and stinky,” said Jacoby. “All the toilets were overflowing because we couldn’t flush them. It was disgusting. We could smell it through our masks — that’s how we knew it was bad.

“But we banded together,” she added, “and took good care of the patients with the limitations we had.”

While Jacoby cared for her patients, other local Christians hit the streets.

“We have been walking in rougher neighborhoods where people don’t have insurance, passing out ‘Need Help?’ cards, along with water and food,” said Jeremy Jacoby, who attended the Enterprise church with his wife until they recently felt led to plant a small, home church. “We are talking with people and giving whatever help they need.” 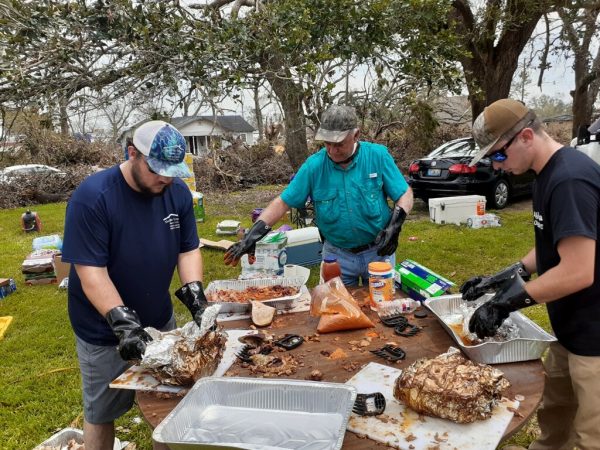 Trey Linton, Bob Nailon and and Hunter Linton prepare meals for those in need after Hurricane Laura. The volunteers were part of a group from the Angelina Church of Christ in Lufkin, Texas, that traveled to Lake Charles, La., to help.

Across the state line in Texas, Ben Terry, deacon and interim preacher for the Ninth and Elm congregation, loaded a church van with boxed lunches and delivered food to kids who didn’t have a way to get to the church building.

And Kevin DiLeo went around town, boarding up windows, moving trees and offering whatever help was needed.

Others came from farther away to help. Dylan Wood, youth minister for the Double Springs Church of Christ in Cookeville, Tenn., made the 12-hour drive to the Texas coast to return a favor.

In March, an EF-4 tornado struck Middle Tennessee, killing 25 people, including a couple that had been attending the Double Springs church. Christians from across the nation, including Texas, came to help rebuild.

“I became interested in helping others the way they helped us,” said Wood, 20, who brought three church members with him for the weekend trip. They volunteered with Disaster Assistance CoC.

Mike Baumgartner, the ministry’s president and CEO, found the town of Orange on a map and decided he would station himself there.

He sent other volunteers to Lake Charles and Sulphur, La. Among the three locations, his organization served around 25,000 meals in the first week after the hurricane.

“We are boots on the ground,” said Laura Cremeans, who founded DRT with her husband, Mark, after Hurricane Andrew in 1992. “We cook meals for the volunteers and the community, but we mainly work on family homes and properties.”

These volunteers really worked hard in this heat today. The families they helped are SO appreciative!

In the first few days after the storm, Bunkhardt estimated that DRT and other Church of Christ volunteers fed about 2,000 people at the Enterprise church building, which became an outreach command center.

“We are really blessed,” said Bunkhardt, whose church only sustained loss of electricity. “Churches came from all over, bringing tools and water and food. They go out and help, concentrating on members of the church first.”

Burkhardt was ecstatic when DRT went to his home and removed the fallen trees around his property, something he couldn’t have done without the volunteers’ help.

Both DRT and Disaster Assistance CoC say they’d like to do more, but they’re struggling to serve at full capacity because of the coronavirus pandemic.

“We are in desperate need of more volunteers,” Cremeans said. “We have so many people asking for help on their homes and properties, but we just don’t have enough volunteers.”

Baumgartner said volunteers typically are housed 20-30 in a room, “and churches won’t let us do that now.”

“We have so many people asking for help on their homes and properties, but we just don’t have enough volunteers.”

The nonprofits aren’t the only ones hit hard by the virus. A week after Laura demolished Lake Charles, an exhausted Lauren Jacoby tested positive for COVID-19.

In preparation for the storm, Jacoby and her husband made the tough decision to put their sons — Parker, 5, and Jude, 7 — on a plane, sending them to stay with family in Oklahoma. That way they would be safely out of harm’s way.

Little did they know that the decision would not only protect their children from the hurricane but also from COVID-19.

“I worked the week after the storm and felt fine,” Jacoby said. “But then I got a headache and thought it was stress from what we went through. And then I got a tickle in my throat.

“I’ve seen enough to know what happens next,” said Jacoby, who was thankful to be staying in an RV with air conditioning. “I came home, and by that afternoon, my whole body hurt. I had a fever, started coughing and figured it was time to test.”  Her husband, Jeremy, also tested positive.

Despite Hurricane Laura and a worldwide pandemic, the Jacobys still hope to plant a church.

“If we actually get to plant a church in the midst of utter chaos, it will only be from God,” Jeremy said.

And if the Jacobys, DiLeos and Brunkhardts can rebuild their houses and patch up their churches, that will be because of God as well, they believe.

Christians should remember, Brunkhardt said, “it’s all going to be gone someday anyway. In the meantime, God will take care of us. It’s going to be OK.” 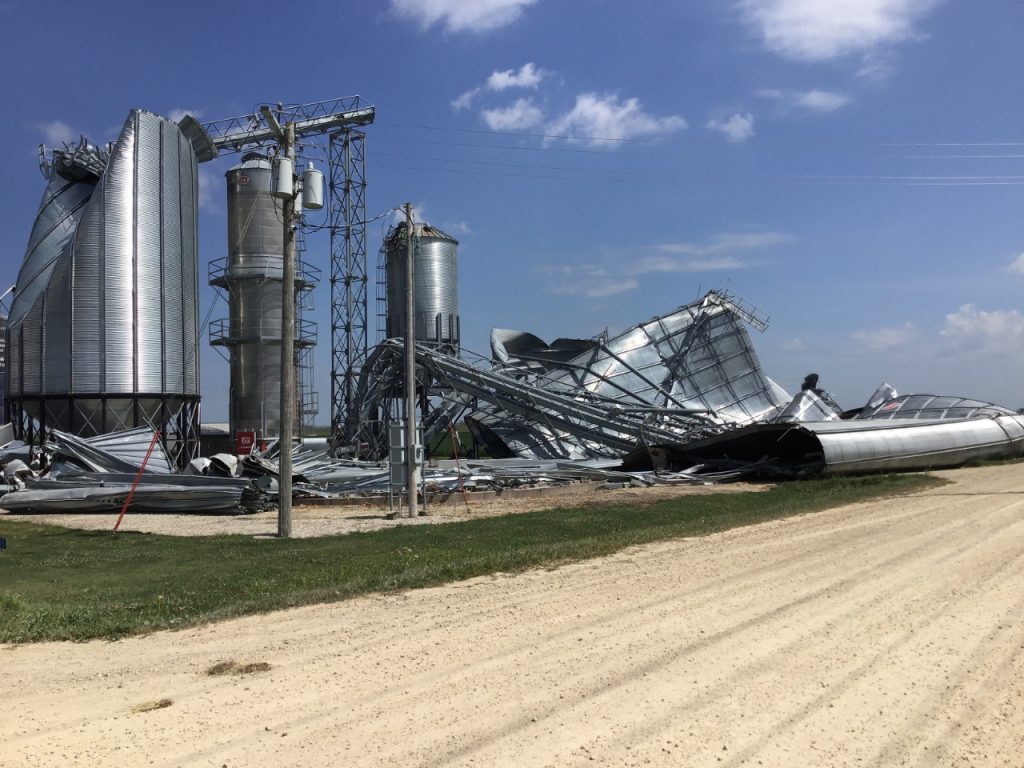