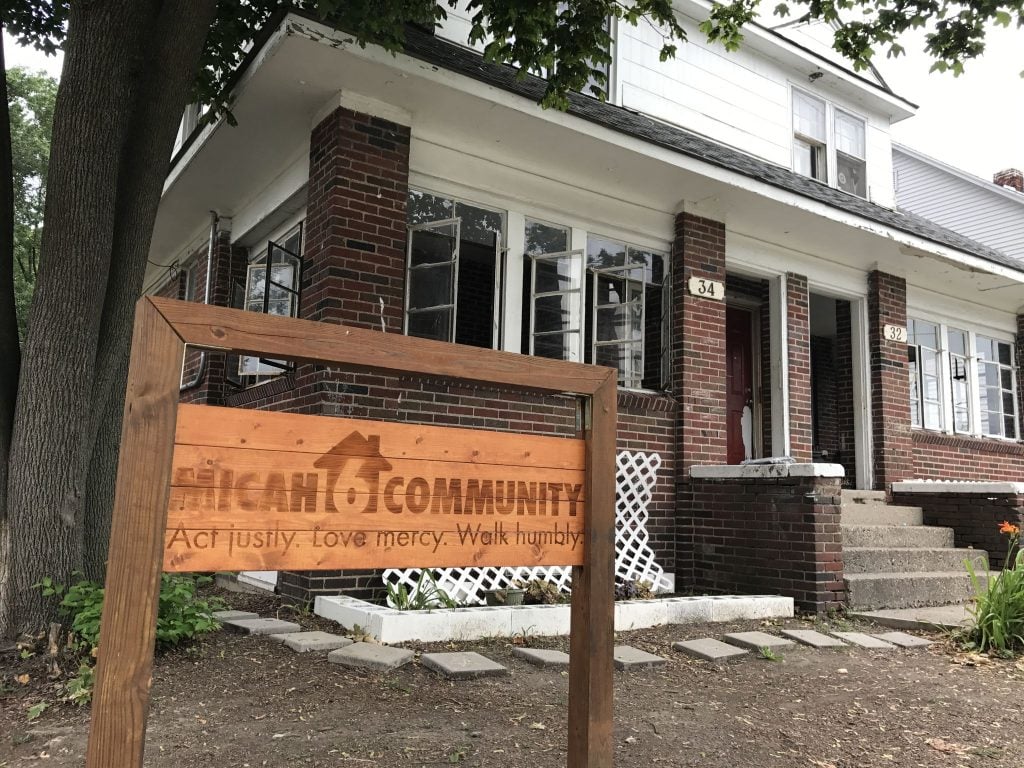 Coleman Yoakum, director of Micah 6 Community, reflects on the challenges and opportunities of inner-city ministry.

PONTIAC, Mich. — “You can’t be a Christian and do drugs. You know that, right?”

Yoakum grew up in an unchurched household in rural Arkansas. He had this crazy dream: He’d go to film school, make movies and fund an expensive drug habit.

But in high school, he came to live with a youth minister named Mac Sandlin. Sandlin introduced the teen to Jesus, steered him right — on drugs and other matters — and encouraged him to attend Harding, the Christian university in Searcy, Ark.

“Mac seemed to have a pretty cool life, so I decided, ‘I’ll be a Bible major,’” recalled Yoakum, who had trouble passing his first theology test, which asked students to list all 66 books of the Old and New Testaments.

More than a decade later, Yoakum, 30, frequently hangs out with drug addicts.

Five years ago, he and a group of friends from Harding moved to the Detroit area to launch Micah 6 Community. Through endeavors such as a fresh food store and community gardens, the inner-city ministry works to improve lives in a neighborhood hard hit by the automotive industry’s demise. The church Micah 6 Community planted meets in the back of the small food store.

“Our congregation is about 45 people who are all struggling with addiction in some way,” said Yoakum, who never did drugs despite flirting with the idea. “We’ve also recently launched a second service that doesn’t allow children to come in order to be a place that the sex offender community is allowed to attend.”

Adam Hill, who preaches for the Rochester Church of Christ in Rochester Hills, Mich., about 15 minutes east of Pontiac, is a fan of the ministry, which takes its motto from the end of Micah 6: “Act justly. Love mercy. Walk humbly.”

“They take seriously the great commands: to love God and to love our neighbor,” Hill said in an email. “Through their missional generosity and hospitality, the neighborhood around them is surging back to vibrant life.

“Pontiac has more than 200 churches in the phone book. Maybe they didn’t need another church; maybe they needed neighbors who loved the way Jesus said to love.”

“Pontiac has more than 200 churches in the phone book,” the minister added. “Maybe they didn’t need another church; maybe they needed neighbors who loved the way Jesus said to love. They embody the best of God’s kingdom.”

Besides Yoakum — who directs the ministry — other Micah 6 Community team members are Dylan Pyeatt from Kingsport, Tenn., the church plant director; Bethany Blackburn from Boca Raton, Fla., who heads up Sprout Fresh Food Store and all of the ministry’s food initiatives; Christian Frink from Rochester Hills, who manages the gardens; and Carrie Hauser from Rochester Hills, who takes care of finances.

In an interview with The Christian Chronicle, Yoakum talked about the challenges and opportunities:

• On how they started gardens that produce thousands of pounds of fruits and vegetables: “We spent the first year and said, ‘We’re just going to sit down and get to know the neighborhood.’ We figured out pretty fast that most of our neighbors don’t have cars. Sixty percent of our neighbors don’t have reliable transportation. The nearest grocery store is a mile and a half away, and depending on who owns it at any given time, it may or may not have a good produce selection. 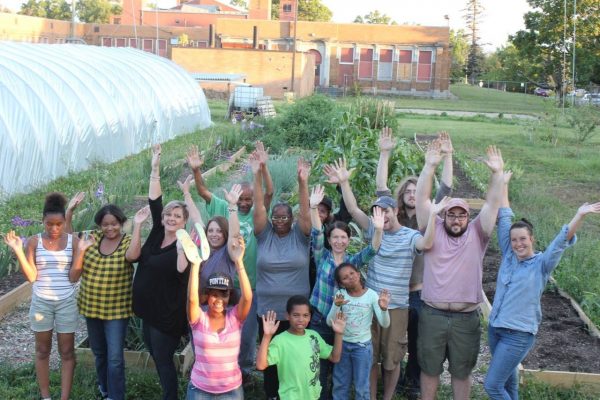 “But we live in a neighborhood where there’s a ton of vacant property around where there used to be houses that burned down or got demolished. So we went to the county, because that’s who owns them all, and we said, ‘How much for a vacant lot?’ And they said, ‘Why?’ And I said, ‘Because I think we want to start some gardens.’ And they said, ‘Well, nobody buys vacant lots. How about $10?’ We said, ‘Sure!’ And so we bought eight of those and just sort of started.

“And a lot of the older folks remember having gardens when they were kids. And then they’re raising their grandchildren. So we had a lot of volunteers who were 7 and 70, who taught us how to do most of the growing that we do now.”

• On the relationships that team members have formed with neighbors: “We have an open-door policy at our house where people can come in and out, drink coffee, take showers, do laundry. Because we had so many friends who were squatting in vacant houses that didn’t have any utilities in them. So on any given day, we probably have 12 people who were just hanging out at the house, especially in the beginning.”

• On what Micah 6 Community is trying to accomplish: “There’s this really great Mother Teresa quote. She’s working with these lepers in Calcutta, and somebody says, ‘Everybody here dies from leprosy. You’re not healing anybody.’ And she says, ‘That’s totally true, but sometimes the people here who have leprosy are getting way more love than they’ve ever gotten in their lives, and it took getting leprosy for that to happen.’

“The leprosy in my neighborhood is addiction. Everyone is either in or trying to get out or has spent serious time in and has gotten clean. We love seeing people who make strides.” 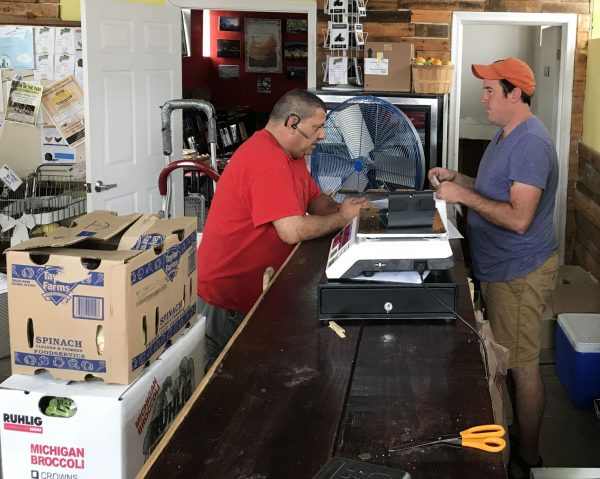 “So Cheryl just started kind of helping around the house with stuff and working in the gardens and painting a lot. Through that, we just got to know Cheryl really well, and she’s been clean now for two-and-a-half years. She runs the Alcoholics Anonymous group that meets here (at the food store) on Sunday afternoons. We’ve connected with a lot of her family. She’s going back to school. So far this is a happy ending.

“But then we had Robert. One of our first times we switched to evenings for church here, he was squatting in a vacant house catty-cornered from the building and said, ‘I heard singing, so I came over to figure out what this was.’ He came over here from the homeless shelter. Tanya, his girlfriend, lived in the house with him. Together, they were pooling their Social Security money and disability money to be able to afford a deposit on first month’s rent on an apartment.

“They had $700 in cash, and Robert took it all and gave it to his crack dealer. So it was all gone. And just sort of walking that out, Robert had finally gotten up to two years clear. They had a great apartment. He got a job.

“But he went back to jail, and he’s now back out and not making good choices. I guess with everybody, there’s not an ending until you die. We have happy chapters, for sure.” 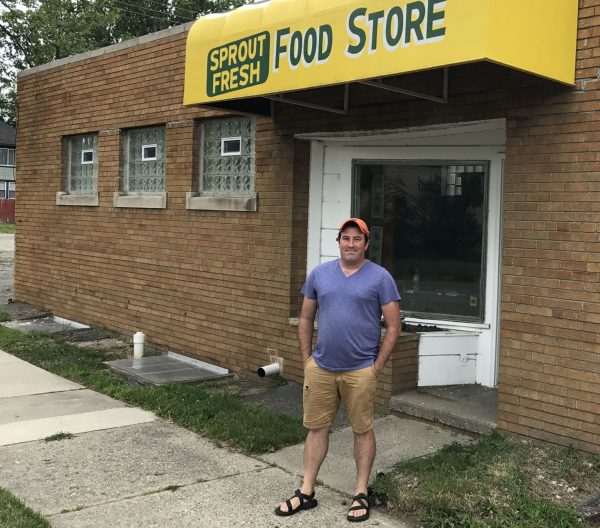 • On the faith required to pour one’s self into such a ministry: “This is not my default setting. I tell people all the time, ‘I would much rather live out of something that looks like it came from a Pottery Barn catalog, like, very nice furniture that’s very uncomfortable so people won’t stay for very long.’

“That’s my natural setting, how I want to live. But I don’t think it is the best way to live, and I don’t think it’s how we were designed to live. So knowing that, I have to create a situation where I don’t have an option, and so living here and telling people they can come by anytime, I think that is better than me living closed up in a fancy apartment somewhere.

“It’s better for me, and it’s better for the world, so that’s what I have to do is create that for myself. Lucky for me, everyone else on the team is crazy enough to do it with me.” 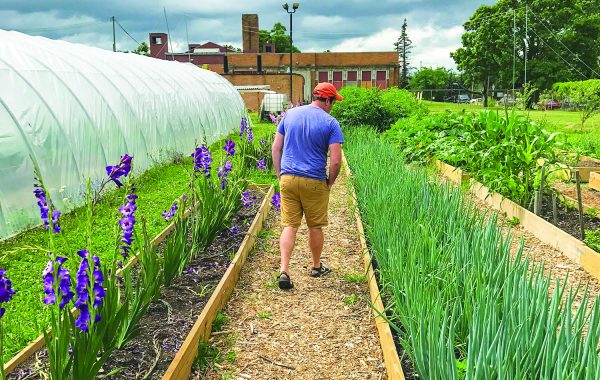