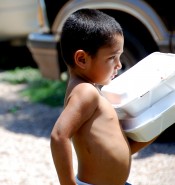 Bobby Ross Jr.
Lantz Howard doesn’t know the boy’s name. The youth minister snapped the boy’s picture while teens from the Bright Angel church in Las Vegas delivered meals in Abilene, Texas.
The teens were serving with the Love and Care ministry, which drives around Abilene and conducts afternoon “street feeds” to serve those in need.
“This house with the young boy had several kids coming in and out running back and forth to the truck for food,” Howard said. “I wanted to capture the moment and tell a story with this photo.”
That story: “It does not matter where one lives, whether in the buckle of the Bible Belt or on the fringes in Las Vegas: We have those who are in need of clothes, food, shelter and love.”
The Nevada teens had planned to go on a mission trip to Honduras but canceled because of that central American nation’s uncertain political situation.
Instead, they traveled to Abilene, where friends of Howard’s from the South 11th and Willis church had been planning a mission effort at home. They invited the Bright Angel teens to join them.