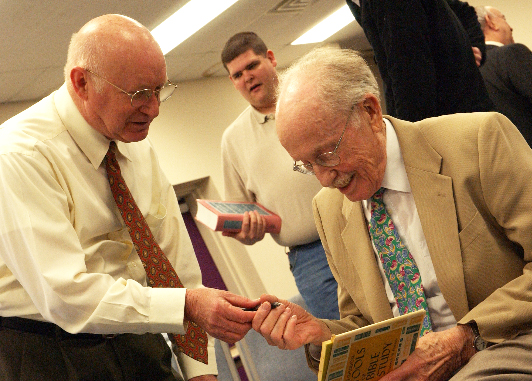 Via Heritage Christian University in Florence, Ala., comes this news:

Dr. Frederick William Danker of St. Louis, the world’s leading authority on New Testament Greek, has chosen Heritage Christian University as the repository for his extensive personal and professional library.  Initial materials from Danker included more than 2,600 books, 2,000 journals, and 700 files. Materials ranged in date from the early 17th century to the latest Greek-English Lexicon of the New Testament, and the collection included materials in biblical studies, theology, ministry, language, and classical literature.
Danker is a renowned classicist and theologian. He is the author of numerous books and commentaries, most notably The Concise Greek-English Lexicon of the New Testament.  Danker is a former educator at Concordia Seminary, Christ Seminary-Seminex, and the Lutheran School of Theology at Chicago, from which he retired in 1988.  He is published in numerous collections and periodicals and continues to be a much sought-after expert in biblical scholarship.
Danker’s friendship with HCU began when he spoke for the Friends of Overton Memorial Library’s inaugural Charles Coil Lecture in April 2010. Aptly describing himself as a “working scholar”, he filled his time at HCU with educational and engaging stories. Faculty and students enjoyed his lecture, “Beyond Borders With St. Luke”, and they quickly developed a relationship with him.
Various university employees kept in contact with Danker during the months following the lecture. In October, he invited representatives from Heritage Christian University to visit his home in St. Louis and pick up an estimated 80 boxes of books. Upon arrival, the number of boxes had grown to over 160.  Jamie Cox, HCU librarian, described unpacking the boxes as opening “invaluable treasures.” These treasures included books from the early 17th century; scholarly works in Hebrew, Greek, Latin, German and English; and personal correspondence between world-renowned scholars.
Danker’s.gif?Action=thumbnail&Width=460&algorithm=proportionalts included lexicons — dictionaries of word meanings and usage — from the initial Greek-German volume by Erwin Preuschen to the first Greek-English volume by W.F. Arndt and F.W. Gingrich. Kathryn Krug, of Columbia, Kentucky, contributed proof pages from both the third edition of The Greek-English Lexicon of the New Testament and Other Early Christian Writings and The Concise Greek-English Lexicon of the New Testament.
In December, Dr. Danker and his daughter Kathie Danker, along with Kathryn and Leo Krug, traveled back to Alabama to attend the Third Annual Friends of OML Christmas Party. During that event, the reference collection of the Overton Memorial Library was named the Frederick W. Danker Reference Collection.
The university has created a special collection of lexicons of New Testament Greek. Some twenty editions and printings are included along with proof sheets, photos, and correspondence. Also included in the special collection are works that support and explain the accuracy of the respective lexicons.
Other divisions of the material are currently being evaluated and will soon be added into the library’s holdings. “We are thrilled to have received Dr. Danker’s collection,” said Cox. “His materials, along with his devotion to biblical scholarship, will certainly enrich the intellectual climate of HCU, its constituency, and the greater academic community.”