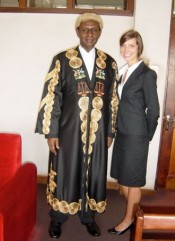 Joy McMillon
When college-bound Emily Smith of Oakridge, Tenn., left her family and friends at the Highland View church in 2003, she never dreamed that in a few years her path would take her not only to Searcy, Ark. and Malibu, Calif. — but also to Uganda.
“I knew when I entered law school that I wanted to use my legal education to help people,” Smith said.
This past summer she had an extraordinary opportunity to do just that.
The 2007 Harding University graduate was part of a group of 10 Pepperdine University law students who spent two months living in the capitol city of Kampala, assisting judges at the nation’s High Court and Court of Appeals. This is the second year Pepperdine law students have worked with the Ugandan courts.
Smith, a second-year law student, loves to travel and experience other cultures. She believes that international trips enlarge her perspective on God.
“We make our faith ethnocentric in our country,” she said, “but traveling gives you a sense of how big God is. He’s in Kampala as much as he is in Malibu.”
In Kampala, Pepperdine students were assigned to one of three courts — Criminal High Court, Commercial High Court or the Court of Appeals. Smith was assigned to the Court of Appeals, which hears cases on appeal from the High Courts.
As a clerk, her job was to help overburdened judges prepare for trial and write their judgments. Her days were spent reading and writing case summaries and researching Uganda law.
On a deeper level, the Pepperdine students hoped to right human rights abuses and focus on social justice Smith serves as the prayer coordinator of a Pepperdine chapter of International Justice Mission, a Washington D.C.-based human rights agency.

“In the Bible, when you read the messages of the prophets and the proverbs, you are always hearing God’s concern about the oppressed and injustice and judges that don’t judge rightly,” Smith said.
“It is interesting to me to think about what changes we can make that will make a system more just, the way God wants and intended it to be.”
In Uganda, the High Courts have a different organizational structure than that with which Smith and others were familiar. In the United States, judges are supported by entire staffs, including clerks who do much of the research and writing involved in delivering judgments.
But this East African country doesn’t have sufficient funding to provide judges with support staff or clerks; they must research, develop and write the decisions on their own. Additionally, High Courts have no court reporters to record trial proceedings, so the judges must hand-write notes.
“Consequently, the proceedings can only move as fast as the judge takes notes,” Pepperdine law student Greer Illingworth wrote in his blog about their experiences.
Soon after the students arrived in Kampala, a city of 1.5 million people, Illingworth discovered a serious problem — the Criminal High Court’s archive.
Archives are designed to serve as an area where law precedent is carefully stored, indexed and readily available to the judges. This archive, however, was located deep in the basement of the High Court’s building and consisted of hundreds of unorganized case files dumped into a dark and dirty closet.
“Dust allergens and the musty smell of water and neglect permeated the area,” Illingworth wrote.
After spending five days on their knees in the High Court’s grimy basement, students had sorted through, indexed and shelved hundreds of Ugandan criminal case files. At their urging, the storage area was fully cleaned and lighted, new shelves were added and a computer was placed in the archives to begin inputting the case files into an electronic database.
“The work in reorganizing the archives is a lasting contribution,” Smith said. “The cases stored there are now accessible and searchable. A digital system of judgments will make research easier and judgments stronger as they can be more heavily supported by precedent.”
In the basement, Illingworth said students stumbled across a turquoise book marked “Confidential,” amid the piles of legal papers.  Curious, they soon realized that they had found hundreds of execution orders given by Idi Amin, military dictator and president of Uganda from 1971-1979..
Each page contained a death warrant bearing Amin’s signature and the subsequent medical report. According to human rights groups, Amin slaughtered hundreds of thousands of his fellow countrymen during the 1970s.
One of the most encouraging things Smith experienced was meeting other believers and visiting churches in Kampala, including a Church of Christ where missionaries Mark and Jamie Long serve. Smith worships at the University church in Malibu.
Ken Starr, dean of the Pepperdine School of Law, is pleased with this student-initiated program.  “We are carefully considering how this program may expand to Uganda’s neighbors in the near future,” Starr said.
Smith had high praise for the Ugandan judges with whom the students worked.
“You always hear a lot about African corruption,” said Smith. “But all our justices were sincerely concerned about justice and wanted positive changes. They were well-educated and serving out of a sense of obligation to their country, not out of greed.”
The law students were thrilled to see several examples of Uganda’s legal system working for justice among the people — thanks in part to their efforts.
Smith said the students helped one woman reclaim land that had been taken by a church using falsified documents. “n another instance, law student Micheline Zamora  wrote an opinion for the Court of Appeals, which was accepted in its entirety and became Ugandan law.  Zamora argued that the Ugandan government had not sufficiently met the elements of proof to charge a man for robbery. The man was freed from prison based on the students’ assessment.
Ordinarily, inmates in Uganda’s appalling prisons can expect to wait anywhere from six months to seven years before their trial or first hearing, Illingworth said. The students were overjoyed with the outcome.
Smith believes the law student’s presence in Uganda this summer had a positive effect on the Ugandan government’s perception of America,  “They were so grateful for our work and encouraged to know that we came because we cared.”