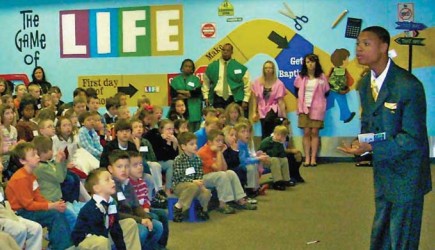 Law school grad: ‘Love lifted me’ from the streets to success

Joy McMillon
EDMOND, Okla. — Born to an alcoholic father and a struggling, uneducated mother, Francis Sosu lived something of a double life.
By day, he was an academically brilliant student — an up-and-coming leader in the West African nation of Ghana. He was named “Class Prefect” each year.
Local media repeatedly featured him for spearheading a social initiative — advocating a change in Ghanaian law that would give educational access to the disabled and needy.
But by night, Sosu was a homeless street child. His parents were unable to provide for him and his four siblings, so he joined the throngs of Ghana’s “hawkers” who clog its busy city streets. He peddled fish, water and oranges. Sometimes, he just begged. At school, he tried to hide his circumstances, dodging school officials who pressured him to pay his fees.
“I simply had only one option which I held onto — to succeed despite my circumstances,” Sosu said.
Now 31, Sosu has done just that. He earned a degree in sociology and graduates this summer with one in law. He traveled to Washington recently to participate in an international mock trial competition.
After the competition, he visited the suburbs of Oklahoma City to talk about the Village of Hope, a ministry that changed — and likely saved — his life.
In Ghana, Sosu was an active leader in a religious group. But no one asked him about the life he lived away from the pews.
“No one seemed to care,” he said “I asked myself, ‘Where is the love of Christ that we always speak and sing about?’”
That changed during his senior year, when he met Roland Bulley, a Christian educator and longtime houseparent at the Village of Hope. Bulley brought the young man to the attention of the ministry’s administrators, including managing director Fred Asare.
“He was malnourished and close to dropping out of school when the Village of Hope came forward to help this destitute boy,” Asare said of Sosu.
Though he was far beyond the usual age for admittance, administrators took Sosu in. They gave him a home, food and clothing and paid his school fees.
“This is the place where Christ is, and this is where I want to be,” Sosu said, recalling his first impressions of the Village of Hope. Soon, he began referring to Asare as “dad.”
In Oklahoma, Sosu visited Christians and congregations that have supported him, including the Memorial Road Church of Christ in Edmond. The church sends mission teams to the Village of Hope. Children give their allowance money and host fundraisers for the Ghanaian children.
Memorial Road members Don and Marita Barnett met Sosu in Ghana five years ago during a trip to the Village of Hope.
“Francis was one of those unusual street kids,” Marita Barnett said. “He had a definite idea of what he wanted to do with his life. It’s amazing to talk with him and see the depth of spirituality that he has.”
The Barnetts helped finance Sosu’s law degree. After graduation, he plans to use his skills to serve less fortunate souls.
But he also has bigger plans.
“His long-term goal — and he will tell you quickly — is to become president of Ghana,” Marita Barnett said.
Before returning to Ghana, Sosu spoke during a worship service at Memorial Road. As he approached the pulpit, he sang “Love Lifted Me.”
He can hardly hear the song without weeping, he said. It’s also the title of his autobiography.
“I was not only ‘sinking deep in sin,’ but also in pain, frustration, and poverty,’” he wrote in his book. “I wasn’t just ‘far from the peaceful shore,’ but also far from the basic necessities of life, which to me were luxuries that were beyond the reach of the ordinary person.
“When nothing else could help, love lifted me.”