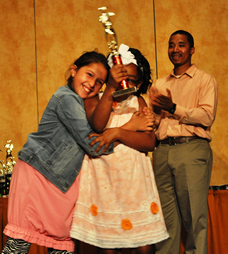 As Christians across the nation ring in the new year, more than a few of them are already making plans for Easter weekend.

That’s when thousands of children and their parents — representing hundreds of Churches of Christ — gather at the annual conventions of the Lads to Leaders/Leaderettes ministry.
“It’s a major undertaking,” said Phillip Hines, vice chairman of Montgomery, Ala.-based Lads to Leaders’ board of directors. “It’s an amazing thing that happens to pull these six conventions together — which involves 20,000 people and is done mostly with volunteers.”
The church-supported ministry challenges children to hone their Bible knowledge, speaking and singing abilities and literary skills, with the goal of developing Christian leaders. Participants may choose from a variety of competitive and non-competitive events.
Another church-supported youth program, Leadership Training for Christ, or LTC, also hosts conventions on Easter weekend. Terry Kitson, senior minister for the Central Church of Christ in Topeka, Kan., has worked with the program for nearly 25 years.
Many coordinators meet as early as November to plan for the conventions, Kitson said, and soon after meet with parents and students to share the year’s theme and energize them for the training that will soon follow.
By now, most congregational leaders involved in the conventions have familiarized themselves with this year’s themes, said Danny Holmes, a board member for the North Texas LTC in Dallas.
“However, no one at this point is behind,” Holmes said. “All LTC-imposed deadlines are ahead of us and it’s not too late to begin the process.”
The Pleasant Ridge Church of Christ in Arlington, Texas, recently hosted its annual LTC kick-off. Tenth-grader Anna Jordan was one of the excited attendees.
“I have been involved with LTC for eight years, and I love every second of it,” she said. “I am planning on participating in choir, Bible quiz, speech, drama, service challenge and teaching challenge.
“I feel that LTC brings me closer with all of my friends in the youth group and helps me draw closer to God and grow in my faith.”
PARTICIPATING EN ESPANOL
Kitson, who has served as an event coordinator, judge trainer, board member and chairman of the board of LTC events, acknowledges that many of the conventions are predominantly white.
He and other organizers said they would love to see the events expand to reach the diverse variety of Churches of Christ in the U.S.
Lads to Leaders encourages its participants to cross cultural and language barriers, Hines said, by offering Second Language, an event designed to help young men and women communicate basic information and teach the Gospel in a foreign language or sign language.
The North Texas LTC offers its Bible-reading event in English or Spanish. With prior notice, organizers can accommodate Spanish-speaking students who want to participate in other events as well, Holmes told The Christian Chronicle.
“LTC would love to see more congregations, more families and, more importantly, more children get involved in our ministry of encouragement,” he said. Signing up is easy, he added, “but that doesn’t mean you should wait.”
Related Coverage