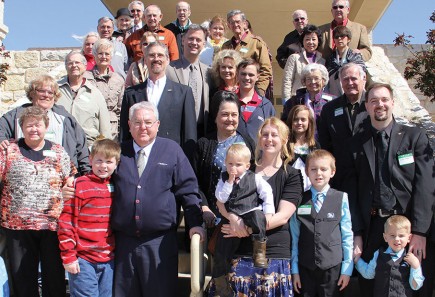 Erik Tryggestad
NORTH RICHLAND HILLS, Texas — As they pray and prepare for the day when they will take the Gospel to their northern neighbors, Christians in South Korea are raising up a new generation of leaders for Churches of Christ — one arts-and-crafts project at a time.
Malcolm Parsley, a missionary who first traveled to the Southeast Asian nation in 1954, reported on the growth of Christian camps there during a recent Korean Mission Forum. The College Hill Church of Christ hosted the event.
Though 6,832 miles separate this Fort Worth suburb from South Korea (that’s 14 hours, 20 minutes by plane),  the distance and jet lag felt less as supporters of the work gathered to learn about the latest developments.
Churches of Christ in both South and North Korea have roots in S.K. Dong, a Korean who was baptized in the U.S. in the 1920s and returned to his homeland to plant churches.
He had little financial support from the U.S. and much opposition from the Japanese, who occupied the Korean peninsula at the time.
Nonetheless, he planted churches from South Korea’s capital, Seoul, north to the Chinese border. As the Korean War began in 1950, many church members fled southward.
Now South Korea has 123 Churches of Christ, ranging from 12 to 180 members each, Parsley said, adding that he knew of none receiving foreign support.
Parsley oversees the Korea Institute of Biblical Studies, an in-depth Bible study program. The missionary and his Korean coworkers prepare for the day when they’ll be allowed to take the institute’s curriculum to North Korea.
In 2012, churches hosted four Christian camps for 133 children. Church members hope to have one camp in each of the country’s nine provinces, Parsley said.
Parsley and his wife, Kwihwa, work with several congregations, including the Gangnam (or Kangnam) Church of Christ, which has 45 members, a U.S. military congregation at Osan Air Base with 15 members and the Yongsan Church of Christ, which has a mix of about 30 Korean and U.S. Christians.
Stephen Wolf and his family worshiped with Korean churches while stationed there with the U.S. Air Force in the mid-1990s. From 2006 to 2010, he made short-term mission trips to South Korea while stationed in Japan.
Wolf drove to the forum from San Antonio, where he is stationed, to talk about the role of Confucianism in Korean life — the opportunities and challenges it presents for the Gospel.
Wolf and his family are learning to speak — and cook — Korean. After he retires from the Air Force, they hope to move to South Korea to work as missionaries. There are many cities in which the family can serve, he said, including Suwon, a provincial capital less than an hour south of Seoul.
“Why send another U.S. missionary to Korea?” he asked the attendees. “I’ve got a city of 1.2 million with no Church of Christ.”
FOR MORE INFORMATION, see eng.christ.or.kr.