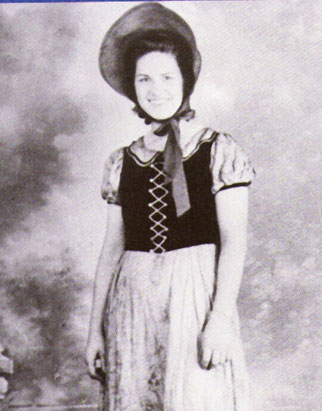 
The country music world mourns the death of Kitty Wells, 92, dubbed the “Queen of Country Music” decades ago.
Fellow Christians remember a woman of faith who was a member of the Goodlettsville Church of Christ in Tennessee and a longtime supporter of Goodpasture Christian School in Madison, Tenn., which is associated with Churches of Christ.
David Sturdivant is a grandson of Kitty Wells and a Goodpasture alumnus. He shared with The Christian Chronicle a document from an anniversary celebration last year that highlights the connection of Wells and her late husband, Johnnie Wright, to the school:

Kitty Wells in a 1943 publicity photo (via kittywells.com)

Kitty Wells was the first female to have a #1 record on the country music charts. She had chart topping records for 30 years. She toured and performed with her husband, Johnnie Wright for 70 years and they have been married for 73 years.
Those are some amazing streaks.  Now, here’s a streak she has that is tied to Goodpasture. In the fall of 1969, Kitty Wells’ grandson, John Sturdivant Jr., began attending Goodpasture. In all, she has had 8 grandchildren, 5 great grandchildren, and 10 nieces and nephews attend Goodpasture. For each year from 1969 until today, someone related to Kitty Wells and Johnnie Wright has attended Goodpasture.  That’s 41 consecutive years.
Kitty Wells and Johnnie Wright helped support Goodpasture in many ways through the years. They performed benefit concerts in the high school gym. They provided the initial donation to get the fund raising started to build the band room that we have today. For several years, they came to visit Goodpasture 2nd graders while they were studying country music.  They brought their tour bus and let the youngsters walk around inside.  Then, they would sing a song or two for them.  Later, Kitty and Johnnie opened a museum in Madison and they let the 2nd graders come walk through the museum for free each year.
We appreciate the many contributions that Kitty Wells and Johnnie Wright have made to Goodpasture Christian School. With so many of their family members having attended school here, we appreciate them adding a little extra to a familiar verse from the Bible. Multiply, be fruitful, and provide a Christian education for your children at Goodpasture.

Wright, Wells’ husband of more than 70 years, died last year.
Funeral services for Wells will be at 1 p.m. Friday at the Hendersonville Church of Christ in Tennessee.
In lieu of flowers, Wells’ family requests donations to Goodpasture Christian School, in the name of the Kitty Wells/Johnnie Wright Scholarship Fund.